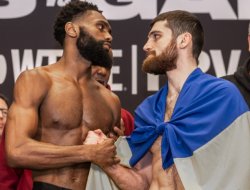 Less than 24 hours left before the fight for the vacant interim IBF welterweight title between American Jaron Ennis (29-0, 27 KOs) and Ukrainian Karen Chukhadzhyan (21-1, 11 KOs). The fight will take place on Sunday night in Washington (USA).

On the eve of the fight, the local favorite announced his goals in boxing: “My goal is the title of absolute world champion. But I don’t want to be limited to one division. I want to take all the belts in the welterweight, first middleweight, middleweight and maybe even second middleweight divisions. I want to be one of the first to achieve this achievement. I’m ready! I can’t wait for the fight.”

Have you seen the nuclear duel between Chukhadzhian and Ennis? We have photos and videos. At the same time, you can appreciate what the fighters talked about at the final press conference: quotes.