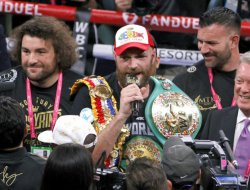 Shane Fury does not believe in the duel of his brother, WBC heavyweight champion Briton Tyson Fury (32-0-1, 23 KOs) with compatriot Anthony Joshua (24-3, 22 KOs).

While Fury and Joshua are in talks for a bout tentatively scheduled for Dec. 3 in Cardiff, Wales, Shane
believesthat the deal would fail: “If I were offered to put money, I would bet that there would be no fight. I will be glad to be wrong. You see, we are sure of victory. But we are not sure that the fight will take place. And the deal is only real if both want to fight. Otherwise, everything will fly off. What is the delay now? Honestly, I do not know. But I am sure that either the problem will be solved today or tomorrow, or we will have to forget about all this.”

Shea believes that “if the brother fight with Joshua does not take place now, then it is unlikely that it will ever take place. After all, if Anthony now does not take advantage of the chance given to him, then Tyson will fundamentally not offer him this opportunity again. I do not hide, in this matter I am rather a pessimist. I don’t think there will ever be a fight.”

Shane voiced the name of the alleged opponent. You will not like what you hear: “I think he will meet with Manuel Charr. Such… With him, even I would have a chance (laughs). But the whole point is that Tyson, directly from the fight with Charr, is preparing for the fight for the title of absolute with Oleksandr Usyk. That is, he used top lightweights in sparring, got himself in shape, and then gave Usyk a boxing lesson. Joshua?.. That’s a good name on the track record, a solid scalp. And he has a chance to beat Tyson, because this is a heavyweight, because he is also very good. But if it is not possible to agree, then Tyson will take a pass: the worse the opponent, the better.

It was assumed that Fury before the end of the year will meet with the owner of all other belts Usyk, but the Ukrainian is temporarily unavailable due to injury. For this reason, Tyson offered the fight to Joshua – he agreed.

Fury’s co-promoter Bob Arum suggests that Joshua doesn’t want to fight, there won’t be a fight. And the main promoter Frank Warren gave the challenger until the end of the week.