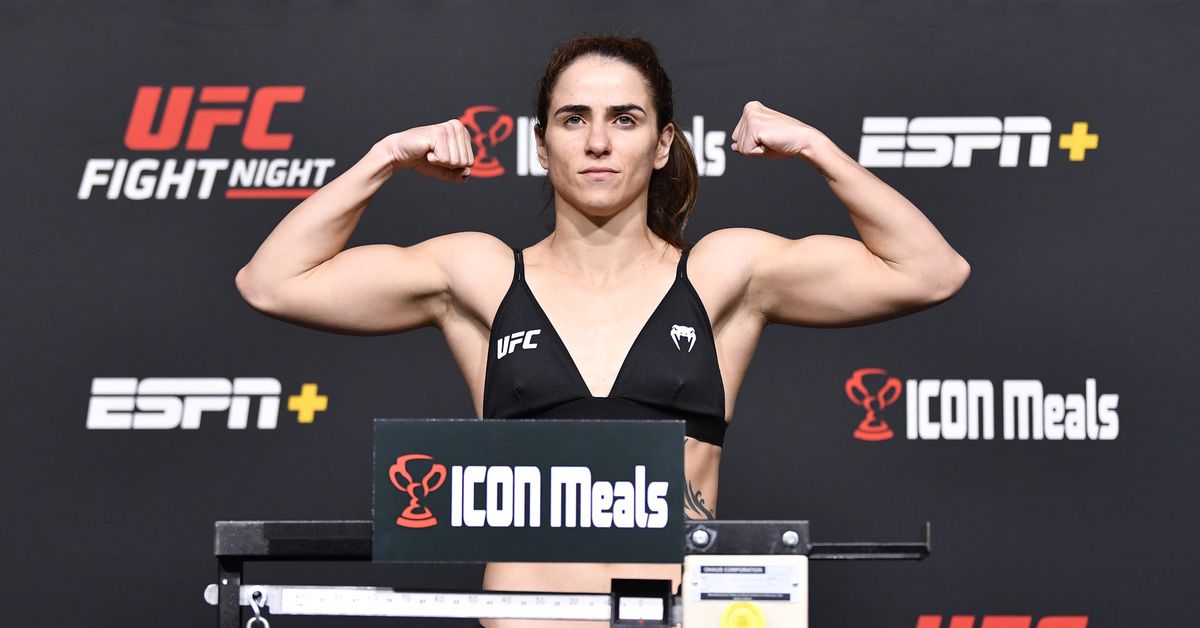 Can a fighter win back-to-back fights over a former UFC title contender and the No. 7-ranked prospect in 2021 and still sit at the bottom of the official UFC rankings? That’s the unique case of Norma Dumont, who seeks for clarity in the company’s women’s divisions.

Amanda Nunes, the UFC featherweight champion, is expected to compete for the bantamweight throne next in a rematch with Julianna Pena. The 145-pound class still doesn’t have an official ranking five years after its creation, and Dumont has no logical target after she’s done fighting Macy Chiasson at Saturday’s UFC 274 in Phoenix.

“My situation today in the 145-pound division is, who wants to fight? That’s the problem,” Dumont said in an interview with MMA Fighting. “Holly Holm didn’t want the fight [in 2021]. She wasn’t hurt, but she didn’t want to fight. She signed the contract and then pulled out 10 days before the fight. Aspen [Ladd] only took the fight because she was in a bad situation after missing weight again [at bantamweight] and didn’t have many options. UFC puts pressure on the athletes. Macy was the same. She lost and missed weight, so she was in a bad spot.

“The fights the UFC is booking for me are opportunities for athletes that need fights, and I know it’s not easy for the UFC to book them. First, everyone’s afraid of this division so no one wants to move up. If you have a ranking, you force an athlete to fight to earn better positions. 145, doesn’t offer that ranking so the girls aren’t interested in taking on tough fights without knowing what their future holds. You don’t have a goal in this division.

“I don’t know why the UFC is insisting on keeping the featherweight division open. Every time I finished a fight they asked me, ‘Go down [to bantamweight] because we’re shutting down the division.’ I started going down and they would send me a fight at 145 again. I don’t know what the UFC plans are and what’s going on, but the girls they are sending me, it’s not about rankings or anything, it’s just the options they had.”

“I’d prefer that the UFC told me to go down once for all,” said Dumont, who missed weight for her last bantamweight contest in November 2020, coming in at 139. 5 pounds ahead of her decision victory over Ashlee Evans-Smith, and missed weight for UFC 274 by half a pound. It’s complicated. I don’t want to take full responsibility because the [UFC] Performance Institute told me, ‘Look, if it’s up to us, you’re staying at 145. At 135, if the UFC tells you to do it or if you decide to go down, we’ll help you, but it’s not our responsibility.’ It puts me in a bad situation. If I go down and miss weight, it’s my full responsibility.

“Aspen Ladd has lost weight so many times that they allow her to lose [to 135],. Sometimes that’s not that acceptable for Brazilians. We don’t have that much leeway in the organization, so we have to be careful. What am I going to do, then? First, I have to follow what the PI has said and stay at 145. I’d prefer if the UFC said, ‘It’s over, go to 135 and let’s move on.’ It would be much easier for me because I’d suffer to make weight the first time but then my body would adapt to the division, and I would know where I’m going with a win.”

Dumont will be on a four-fight winning streak if she gets past Chiasson at UFC 274, but can she challenge for a title next? She can only answer one question.

“If they shut down the 145 division and tell me to go down, where am I going to be in the ranking?” Dumont said. “I’m No. 15 now. Felicia Spencer was one of the most talented athletes in the organisation. Aspen Ladd, No. 7 bantamweight, but I’m No. 15? With a victory over Macy (who’s number. 11? Are they throwing me in the top-5? This is very complex. It’s like swimming in the ocean, but I don’t want to go anywhere.

“Honestly, I really don’t think [Nunes] will even defend the featherweight title anymore because the division is so thin and there’s no reason to keep going up and down in weight just for ego. If I were her, I’d just stay at 135. Although I will fight Macy, I am not sure what my goal is. With a win I will ask for a title shot, although we aren’t sure if it will happen. As long as I agree to keep at 1345,, there is no reason to me taking full responsibility to lose weight. The PI says they do not want that.

“I’ll win convincingly [on Saturday] and pressure the UFC to put me in a good spot. To go down to 135 against a top-5 or straight for the 145 belt. If Amanda isn’t going to defend it and the UFC wants to keep the division, put me against someone else. [Raquel] Pennington is a great name to be an interim, as she has won the division twice and four consecutively. I’d love to fight her. First I have to win and put the UFC against the wall [laughs] so they give me an interesting fight next, either at bantamweight or featherweight.”