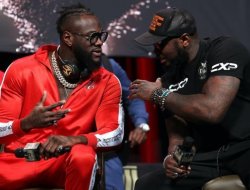 The coach of the American ex-world heavyweight champion Deontay Wilder (43-2-1, 42 KOs) Malik Scott is not happy that the next opponent of his ward, most likely, will be the Mexican Andy Ruiz Jr. (35-2, 22 KOs) ), with which they reached the final of the WBC Candidates Tournament.

According to the coach, he is only interested in two other opponents – either the current unified champion from Ukraine Oleksandr Usyk (20-0, 13 KOs), or British ex-champion Anthony Joshua (24-3, 22 KOs).

“If the choice was mine, negotiations would have been on the fight between Deontay and Usyk or Joshua in a big stadium. With one of those two,” Scott said. “But not against Ruiz. We have three years left in this sport and I only want to see Deontay fight at the highest level.”

Although at worst Ruiz will fit, Malik noted:

“He (Wilder) would have been happy with Ruiz, although not in the same way as Usyk or Joshua. I only want these two fights for Deontay. No others interest me.”

Interestingly, in parallel, Scott was full of compliments to Briton Joe Joyce.