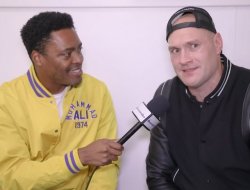 WBC world champion Briton Tyson Fury (32-0-1, 23 KOs) during
interview for a news portal, he spoke about the top boxers in the heavyweight division (over 90.7 kg).

Tyson has portrayed the former top heavyweight trio of himself and ex-champions Deontay Wilder (42-2-1, 41 KOs) and Anthony Joshua (24-3, 22 KOs) as a mythological creature from Greek mythology. Fury also spoke in a manner peculiar only to him about the Ukrainian unified champion Oleksandr Usyk (20-0, 13 KOs).

Both Joshua and Wilder have suffered several defeats. They are trying to build their way back to the titles. Who do you think will do it first and why?

“Before we talk about it, I want to touch on this three-headed monster that has been around for quite a few years. It was me, Wilder and Joshua. The three-headed dog from Greek mythology is Cerberus. And the three-headed became one-headed. Isn’t it funny that an old, fat, bald dude who came back from retirement… A junkie, an alcoholic, a suicidal patient, came back from retirement to chop off two other heads to be in charge. Everyone thought my head was over, now look at them. They have several defeats.

I completely broke Wilder’s record. He should have three losses, but he has two and a draw. And Joshua now has three defeats in his last five fights. Dropped below the floor, when a fat old man, out of shape, slow, double-chinned, who can’t fight, afraid of everyone and everything, continues to shove with a drill, participates in big events – it’s pretty funny. It got to the point where new people in the division were breaking through to give me a challenge. Like this middleweight guy who’s bloated out of middleweight. Now he beat a bodybuilder. He is a credible contender. But when I walk right through him, people will say: “He was too small for Tyson Fury. Everyone knew that Fury would beat him. He’s in his stomach.” You are the first to hear it now [обращается в камеру]. There will be such complaints when we win. When I roll out Usyk, they will say that he is too small for Fury, but Fury would never beat the former Evander Holyfield [смеются].

I don’t know if he’s ignoring you because you have a different opponent, but he’s even willing to go down to cruiserweight. It seems that he is not very puzzled by the duel with you.

“I don’t blame him. He was offered a fight for December. They refused him. Certain people pressured him to take the fight, to make it a reality, but he doesn’t care. They’d rather lose money than fight me. He had to go back to the wilderness and eat his own cooking. I wink. And then he’ll be back when he’s a big, strong boy to fight the Gypsy King.

Meanwhile, The Telegraph writes that Fury has already chosen an opponent. Not delight…