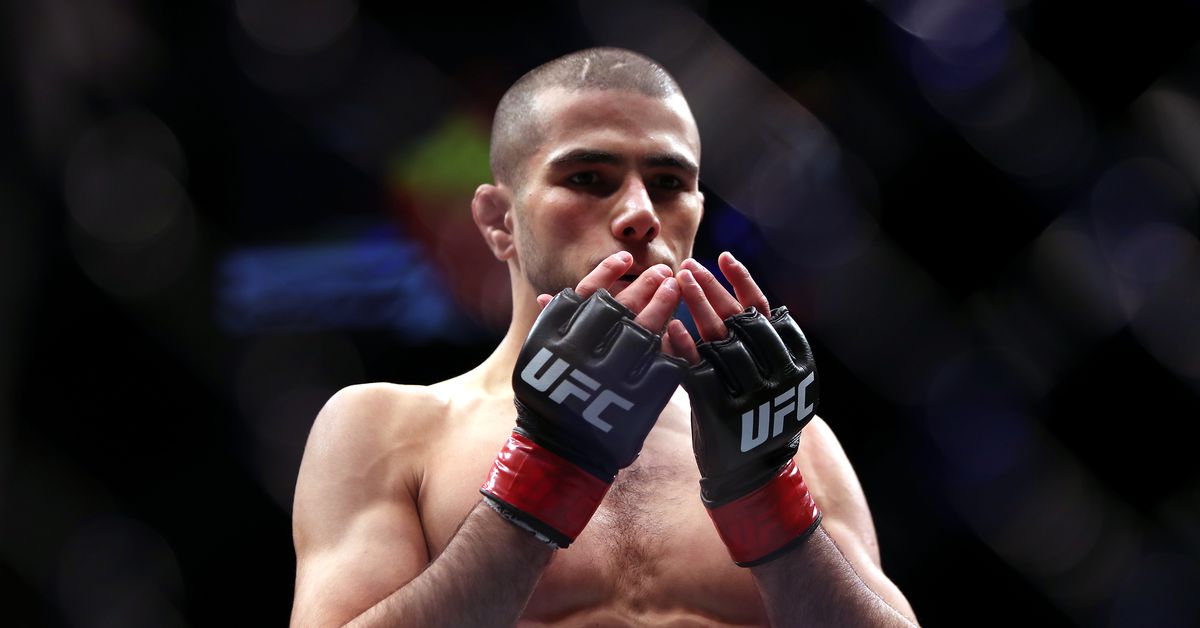 Muhammad Mokaev came into UFC London surrounded by plenty of hype after winning his first 27 MMA bouts, including a sterling 22-0 record on the amateur scene.

Mokaev tore through Cody Durden in just 58 seconds at UFC London to win his promotional debut and notch the second-fastest submission in UFC flyweight history.

“I’ve had this before — after every fight, there’s something like this — but this one was different.”

It was a perfect introduction to the big stage for a 21-year-old prospect who many have long hailed as a future UFC title contender.

For Mokaev, it was also a moment of vindication after a testy lead-up that began this past November when Mokaev called for the bout following Durden’s controversial remarks at UFC Vegas 43. In the aftermath of Durden’s win over Qileng Aori, the American said in his post-fight interview that he wanted to send Aori “back to China, where he came from” — comments which the newly-signed Mokaev immediately called out as “racist.”

Mokaev was able to fulfill his dream of fighting Durden and became an entry in the UFC. They exchanged shots with the media before the fight. Mokaev stated that their animosity continued through UFC London fight week when they met in the hotel.

“Twice, to be honest, on the fight day and then two days before the fight,” Mokaev said.

“The first time I saw him, it was the start of the week. I was in the lift going up and he probably pressed the bottom on the second floor and was coming to the first. He wanted to walk in, then he saw me. I’m like, ‘Hey Cody, you still alive?’ I said hello and then he didn’t go in. I was with one of my coaches — actually it was a video guy with me. Then I interviewed and [Durden responded on Twitter], said, “No, it’s not bulls ***..” You said that you were a motherf *****.’. I listened, and then I was like “Man, this is not what you meant.” Just leave it.’

“So on the fight day, he was with the security guard, and I was in lift with about eight people, maybe six people,” Mokaev continued. He wanted to come in and see us, but he was not interested in going in. The security guard said, “Don’t worry. Don’t worry, Cody, come in.’ So he got in and then it was fight day, in the morning after breakfast, and I said, ‘Oh, you don’t have your glasses,’ because he put glasses on at weigh-ins so I didn’t see his eyes. He said that he was going to smash you tonight. I’ll smash you right now if you want to.’

In the end Mokaev exceeded all his expectations. After promising a second-round finish of Durden in the pre-fight banter, he one-upped himself by blitzing the American with a flying knee followed by a picture-perfect guillotine choke to handle his business early and ignite his adopted hometown English crowd inside London’s 02 Arena.

Then he let Durden hear about it one last time before all was said and done.

” When I realized that I had just dropped him almost a TKO, then I thought they might say it was a lucky kick — so I said, “Let’s submit him.” “So I finished him, I’ve done everything that was possible in about one minute. You have nothing more to show. And … we make him listen.

“He was very critical of the Chinese fighter in UFC. I told him, ‘Listen, if you carry on, we’ll send you — I’ll send you tonight to [the U.S.] embassy and they’ll take you back to the U.S. But if he doesn’t carry on, he’s already [been] humbled, it’s enough. Don’t need to bring him [more], it’s maybe a bit of bullying. Let him be there, maybe he will become a better person .”

Mokaev may still be young in the game, but he’s one of the most intriguing talents to enter the UFC’s 125-pound division in recent memory and he doesn’t want to take the slow road to title contention. The Dagestan-born up-and-comer is already eyeing a return on the UFC’s return to International Fight Week — July 2 at UFC 276 — and he wants MMA Fighting’s No. 15 ranked global flyweight Tim Elliott to be his dance partner.

“It’d be amazing fighting on on that card,” Mokaev said. “I’m already like, ‘Hey, give me Tim Elliott. Give me anybody from top 15, top 10.’ I know they’ll be like this, ‘Hey, who is this young kid?’ And already Tim Elliott posted on Twitter, ‘I’m too old, everybody’s picking on me. I’ve got more bonuses than you actually have fights.’ Then fight me. Talking too much is not a good idea. You can either fight, or just keep your mouth shut.

“Tim Elliott, I respect. He is a formidable opponent. People say there’s Amir Albazi, there’s [other contenders]. My response was, “Anybody please give me.” But Tim Elliott is the best name to defeat .”