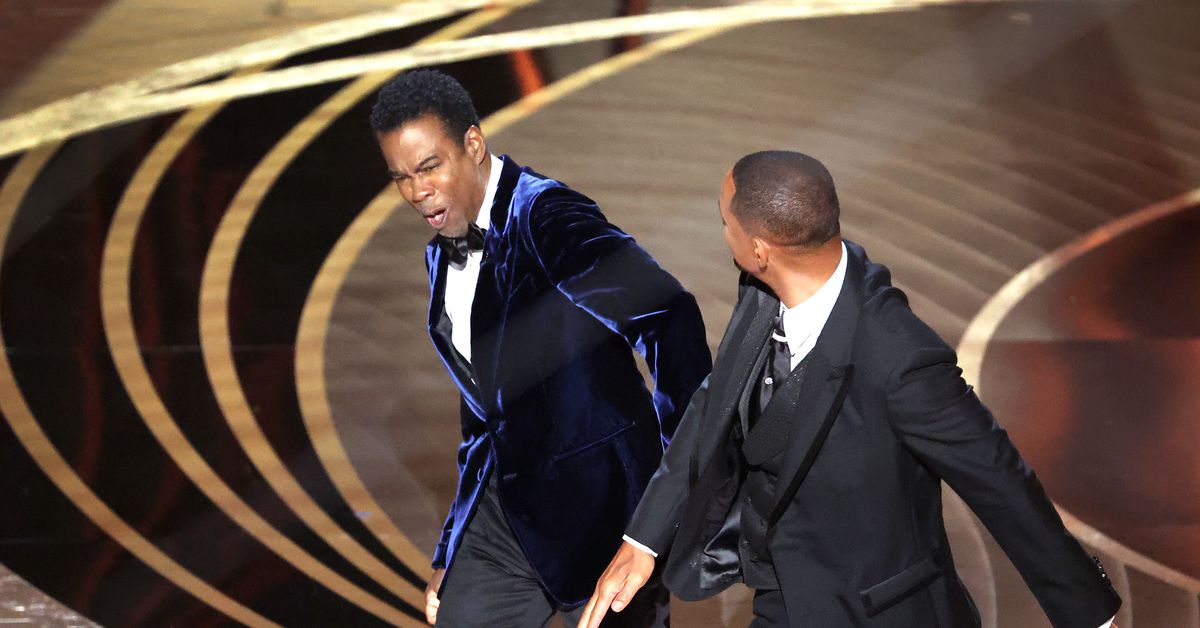 On Sunday night at the Oscars, Will Smith slapped comedian Chris Rock for making a joke at the expense of his wife, Jada Pinkett Smith.

During a monologue, Rock told Pinkett Smith, “Jada, I love you, G.I. Jane 2, can’t wait to see it,” making fun of Pinkett’s shaved head. Pinkett Smith has previously spoken about struggles with hair loss and appeared obviously displeased with the joke, and moments later her husband walked on stage and slapped Rock, reportedly saying “Keep my wife’s name out your f****** mouth” as he returned to his seat.

The incident went viral quickly and the MMA community reacted on social media. Some people praised Rock for his ability to take a shot and some made jokes about Jorge Masvidal’s attack on Colby Covington. Others simply commented on a situation which seems to be more at home at World MMA Awards rather than the Oscars.

FINALLY!!!!! there’s an #Oscars show worth watching. AND @chrisrock has a chin https://t.co/SYahGonQTg

Chris Rock got a chin

Chris Rock got a chin

Will Smith – A fucking legend

Let’s do it in August on my undercard https://t.co/jBYIpHOTk2

Anyone watching the #Oscars? Will Smith is a gangster for that one, Chris rock was the ultimate professional for the way he continued

Very hard to surprise me nowadays but watching Will Smith slap the shit out of Chris Rock is very surprising! I’m actually amazed that this happened. You could see the moment Will started to feel played

Hey @chrisrock I got your back and you @ColbyCovMMA not so much. pic.twitter.com/XHsfyAaRAV

Woke up to Will Smith slapping the shit outta Chris Rock… pic.twitter.com/bm7GYbHugI

Sucker punch? He looked at him with a boyish expression and slapped his face. Lol, Dan, don’t be so soft about me! https://t.co/IucktixF04

Colby and Chris rock crying with eachother “but It was just business” pic.twitter.com/RvlcO0rW1F

#willsmith might want to pull one of these out 2night pic.twitter.com/ckoDsDCYPn

That was a clown move by Will Smith.

Rock is a comedian he’s doing what comedians do… Make jokes.

Will Smith is whack for that weak move.

What you protecting your wife from? Words? He’s protecting his wife from jokes… how stupid and weak.

Lmao!!!!!!!!! If that was @ColbyCovMMA he would of been on the phone calling 911 while trying to give Trump a hand job. Well played @chrisrock. You took that shit like a man… You should catch him in the parking lot lol pic.twitter.com/4Cznq3il3l

Mike Lowery out here getting active lmao Chris should of rocked his ass ctfu https://t.co/7QiGoA6EnS

There go words having consequences again.

Will Smith don’t gotta cuss in his raps to sell records pic.twitter.com/XdCftf8C8c

Didn’t knew it was called a Will Smith #WillSmith #Oscars2022 #chrisrock #willsmithchrisrock pic.twitter.com/OxQzQz7NLz

We giving points for slapping comedians……..yall real inconsistent out here

Shortly after the incident, Smith returned to the stage, this time to accept the Academy Award for Best Actor for his portrayal of Richard Williams, the father of Venus and Serena Williams, in the movie King Richard.

Results. Curtis Blaydes knocked out Chris Daukaus in the the second round at UFC Columbus.

Busy. Nate Diaz publicly requests UFC release: ‘I got s*** to do’.

Aljamain Sterling showing his progression in the UFC.

The latest episode of the Smesh Bros.

On To The Next One. Matches to make following UFC Columbus.

“aLl YoU dO iS wReStLe” pic.twitter.com/pqQkHhamEk

There’s always negative comments after losses, and we often dwell too long on it. I’m very appreciative for the people who have not done that and who have reached out with positivity. You guys are the best, especially @Boogerbeard1 @MacMallyMMA thank you.

Hate it or Love it? The Underdogs are on Top! #teamdontblink pic.twitter.com/p5LHD8SphP

Congratulations you dirty kiwi @kaikarafrance you just punched your ticket with the God of War. @theassassinbaby you just took the back seat. You are 0- 2 against @Pantojamma if you could beat him I’ll give you the next title shot. Vs let’s make it happen @danawhite pic.twitter.com/mysuGl9Wsa

It was an honor had a blast https://t.co/njktDhjWQp

I’m not one to ask for rematches and won’t bug you about it but if you ever want to do it again I’m down brother https://t.co/9GD5ZkNmUN

I finally bury you https://t.co/Ut2obJnWD8

Both men compete at welterweight.