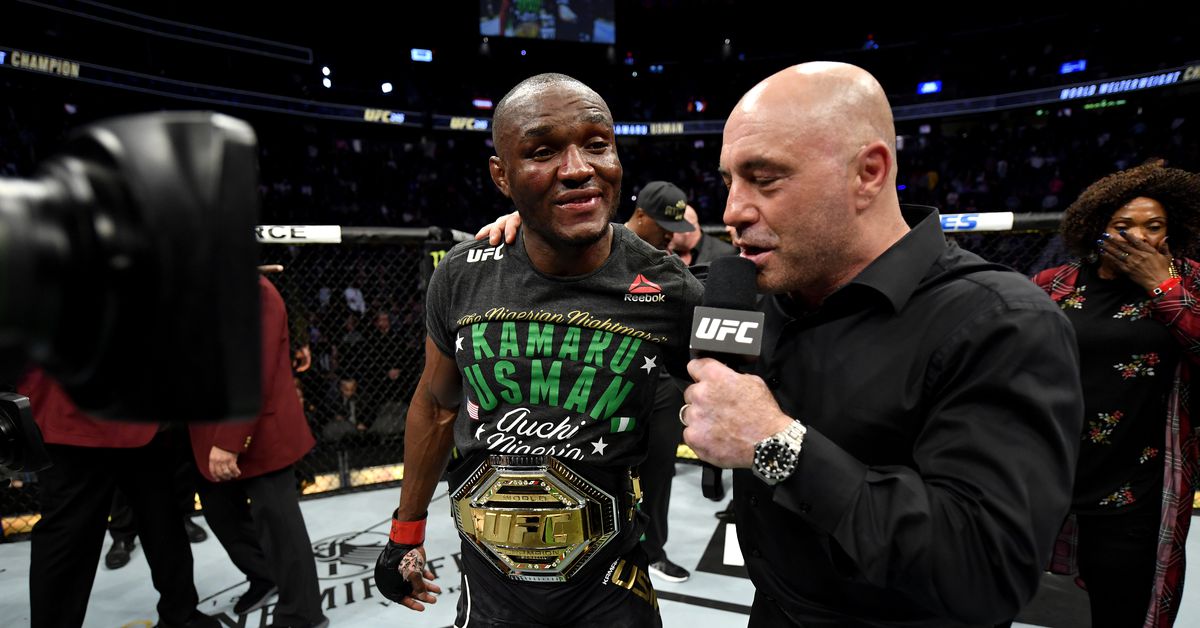 For several months now, UFC welterweight champion Kamaru Usman has been talking about a potential crossover boxing match against Canelo Alvarez. Usman vs. Canelo, as the best pound-for-pound boxers in their respective sport, would be a unique event that Joe Rogan, UFC commentator, would love to watch.

“I would like to see him fight Canelo, I really would,” Rogan said on the Hotboxin’ with Mike Tyson podcast. He’s not a favourite in boxing against the best boxers ever, but I would love to see him make a huge payday. In the same manner, I’d like to see Ngannou face Tyson Fury. That’s a way you can make a s***-load of money, and I don’t think it damages his potential as a UFC fighter. It would have been a great experience as a champion if he had that fight, and then he switched to MMA. I think he’d probably be even better as a striker if he gets through it relatively undamaged, even if he loses.”

Usman first floated the idea of a fight with Canelo last year as he was preparing for his rematch with Colby Covington, saying he wanted to see the contenders actually step up and make him excited. Usman has continued to press the narrative and though Canelo was initially against the idea, he has since come around to it, saying he wouldn’t rule out the matchup. UFC President Dana White called it “a stupid fight that doesn’t make sense”, stating that Usman isn’t a boxer, and Canelo the greatest boxer in the country. But though it’s hard to argue with those two points, Rogan believes that Usman could potentially surprise some people, through sheer will power alone.

“He will feel pain,” Rogan stated. It’s not the same sports, but Rogan is a man who knows how to win. This guy is a complete mess. His knees have been broken. He just doesn’t run, but he never runs out of cardio. He drives everything he does. All the plyometrics and all the strength and conditioning stuff he does in the gym, he’s doing it with f***** up knees. All the wrestling drills, he’s doing it with f***** up knees.”

Usman last fought at UFC 268, winning a unanimous decision in his rematch with Colby Covington. Later this year, he will defend his title against Leon Edwards. Canelo recently unites all super middleweight belts, knocking out Caleb Planet in November. This was also the night Usman beat Covington. In May, he will defend his WBA title as light heavyweight against Dmitry Bivol.

Results. Clay Collard pulls off another huge upset with brutal shutout of Jeremy Stephens at PFL 1.

Out. Robert Whittaker out of UFC 275; Marvin Vettori calls for fights against Darren Till or Khamzat Chimaev.

John Fury announcing he will be there to win Tom Aspinall’s UFC championship.

Francis Ngannou and another interim title.

That fight is the the type of fight I want to avoid until I’m getting championship money. That was nuuutz #PFL1

Collard is built different, very few people can take that many heavy shots from Jeremy

Sorry to say guys due to an injury I took early in the camp I’m not able to compete in June. I did everything I could to get it right but its not healing in time. All this means is that I’ll be back in the octagon a couple months later and I’ll be better than ever pic.twitter.com/Q0PEtjxDfs

Vettori needs a pair to fight? Oh really? Lol how funny is it ? send me the location dumbest

. @Bisping post legal confirmation that you are not under UFC contract and I will get you a contract. You retired in 2017 and Dana still got you by the balls. We fight wherever I say we fight.

Jake The Pretender Paul @jakepaul first it was fight me, then was show me you can get licensed and now it’s show me you’re not under contract. You know I would not give up on you, Mate. Jake??? https://t.co/64jUEqvhTk

And then there are others who chase that money.

@jakepaul when you going to stop picking easy fights?
Stop running from me and accept my challenge.
You should be happy that I accept fo fight someone that has not history in the fight world. @Disney boy I will send you sleeping in the lap of Mickey. pic.twitter.com/mIw7V3Hgr3

@jakepaul leave the OG alone. WTF I kind of respected how you got into this shit but now you’ve been training for how long 4+ years?? It’s time to fucking prove yourself. I’m here https://t.co/7jEELiEmqM