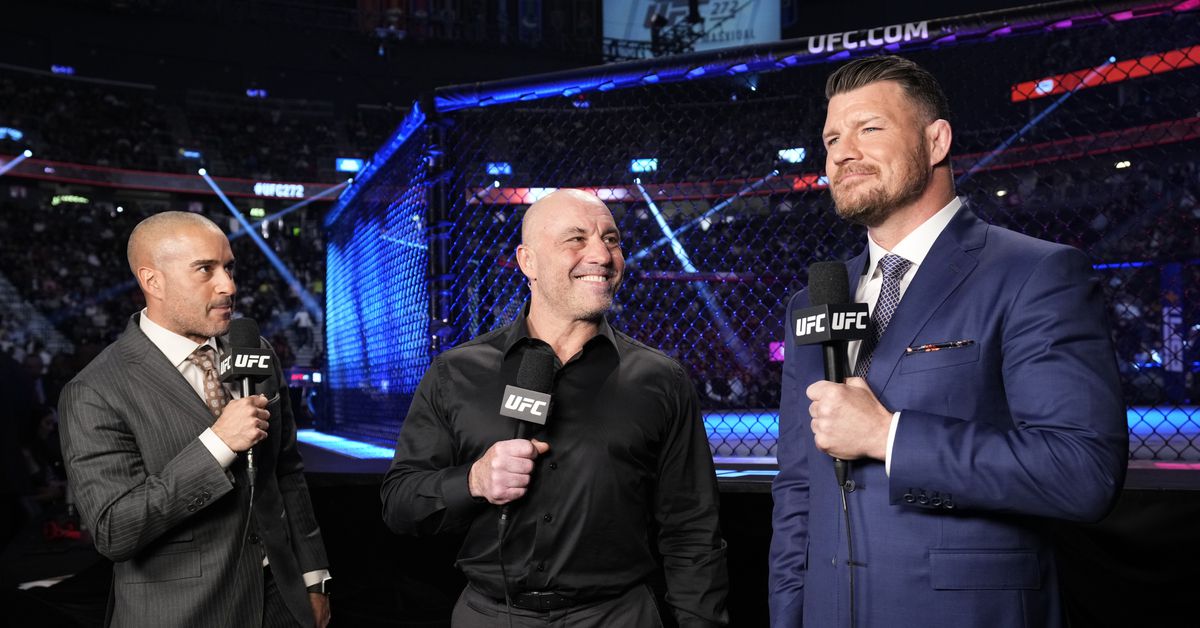 McGregor is currently on the sidelines, recovering from the shattered leg he suffered in his fight against Dustin Poirier at UFC 264, but with the one-time double champ targeting a summer return, the talk has turned towards who McGregor will face when he does come back. Previously, McGregor was targeting a lightweight title shot upon his return, however, after putting on some size during his recovery, McGregor recently said he is “eyeballing” coming back as a welterweight, and has his sights set on UFC welterweight champion Kamaru Usman. Rogan warns McGregor that it may not be the right path for him.

“Now he’s talking about fighting Kamaru Usman. Be careful what you ask for,” Rogan said on his Joe Rogan Experience podcast. “Be careful what you ask for. Usman is big and at the top of food chains. That’s the best pound-for-pound fighter alive, Kamaru Usman, and he’s a natural 170. You’ve got to remember, Conor McGregor won the title at 145 and then he went up to 155 and knocked out Eddie Alvarez to become the champ-champ… Then he fought at 170 but he fought Cowboy Cerrone who is a natural 155 pounder. No knock on Cowboy, Cowboy’s beat a lot of good 170 pounders, he’s an elite fighter, but Usman’s a different thing. That’s a different peak. There’s no oxygen at the top of that mountain. That’s as good as it gets ever at 170.

“I would put Kamaru Usman up against any 170-pound fighter that’s ever lived. He might not beat Georges St-Pierre. He might be the best that’s ever been at 170. He is as good as it gets. He has ferocious knockout strength, is an elite wrestler, and nobody can put him down… But he keeps getting better. He continues to improve .”

Usman currently is in one of the most exciting runs in UFC history. The welterweight champion is 14-0 in the promotion with five successful title defenses under his belt. Most recently, Usman won a unanimous decision over Colby Covington in their rematch at UFC 268.

McGregor is currently on his worst run in his professional career. After claiming the lightweight title in 2016 to become the UFC’s first ever simultaneous two-division champion, McGregor has struggled to recapture his top form, losing three of his next four bouts, all by stoppage. McGregor is not a good candidate for an Usman fight, given the way their lives have turned.

” It is important to have a strong mind,” Rogan stated. Rogan said, “The ability and ability to conquer, to find the right way to react in difficult situations, to adapt when they do.” Which decisions are you making? Whether you have any give up in you? Some people have a little give up in them, you just have to find, what’s that threshold? Conor has been made to give up by people. He’s tapped. Only one other Usman tap has made him tap. He was caught in a back-naked choke during his second fight. But he was new… Since then, he’s smashed everybody.”

For now, this fight is purely hypothetical. Though Usman has previously shown some inclination towards a fight with McGregor based on the interest it would draw, “The Nigerian Nightmare” already has his next opponent lined up, a rematch with MMA Fighting’s No. 3-ranked welterweight, Leon Edwards.

Arrested. Jorge Masvidal was arrested for aggravated battery and criminal mischief in connection to an alleged attack on Colby Covington.

Contract. Paddy Pimblett hopes for contract renegotiation with UFC: ‘I proved how much I’m worth the other night’.

The rise of Kai Kara-France.

Arnold Allen breaks down the fight with Dan Hooker.

Escape from Kyiv. The PFL’s Olena Koleznyk tells her story of fleeing Kyiv to Las Vegas.

Wow all that shit about “it’s on site” & “it’s a free ppv” then u run & press charges? @colbycovmma ur a whole square in a half! @malkikawa #freemasvidal #bmf @GamebredFighter keep it G my guy from the west 2 the east #fucknatetoo @NateDiaz209 C u soon princess peach

Hey @TheNotoriousMMA you sure like to put the pedal to the metal on the artificial Gas. #justsaying

Been tryin to fight for 7 months @ufc
LFG

But he ain’t capable now or this year

The couple times I got beat up I just thought shit that sucked I should trained harder or employed better tactics. Not let me sneak up and attack him on the street bc I have anger/insecurity issues.

Jorge also talked about my family so he is being a hypocritical terd on top of all else. Suck it up butter cup, you got whipped. It happens sometimes.

Is this an apology or what is this Im very confused. Don’t need an apology, you said what you said. Im tough enough to be ok with it, I have thick skin. https://t.co/lqcOBhaJvC

Excited for the opportunity to get the gold strap. I started this journey to establish myself as the best in the world and on may 13th I get to prove it. It’s not lost on me the sacrifice @s_amoskin has made to defend his country. Prayers for you and your loved ones. pic.twitter.com/GIS3BPi07u

Excited to be the presenting sponsor of the @stjudelouisiana 2022 5k walk/run this September in @sugarmillpond for Childhood Cancer Awareness Month!
You can participate virtually or in person.
Huge thanks to all of our donors! Without your support none of this would be possible pic.twitter.com/6PIiFMSPCv