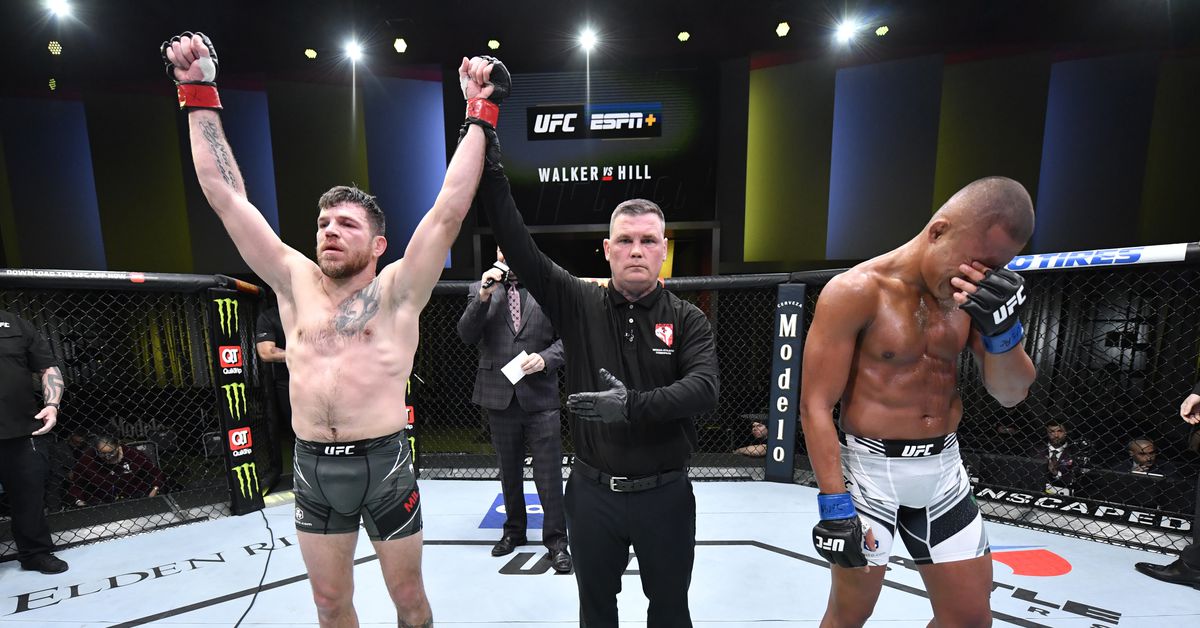 This past weekend, Jim Miller stamped his name on another UFC record when he knocked out Nikolas Motta on the main card of UFC Vegas 48. The win for Miller, who already owns the UFC records for Most Fights All Time (39) and Most Submission Attempts All Time (45), tied Donald Cerrone for Most Wins All Time at 23 and the New Jersey native could not be more humbled by the moment.

“The record feels sweet and the win feels sweet,” Miller said at his post-fight press conference (h/t MMA Junkie). “It’s hard to say if it would feel any worse, because it feels good. It’s always good to get a win. I like having good fights, and I like showing off my skills. So any time I can do that, I enjoy it.

“… I look at the fighters that have come and [gone] in the UFC and in the sport of MMA, and I’m leaving my mark, and that’s cool. It’s cool to have an effect on the sport. It’s cool to get the appreciation of my peers. That’s awesome. Having 20-plus wins [in the UFC], having over 20 fights in the UFC – there aren’t many people [who have done that]. I’d like to know the average career in the UFC. I’d assume it can’t be over five [fights]. The attrition rate is very high… So to be associated with the likes of the legends of the sport, it’s awesome.”

It’s not just being associated with the legends of the sport though, it’s being praised by them as well. Miller is a beloved figure in the sport and received high praise from his peers after the sensational knockout, as well he should have. Miller made his UFC debut back in 2008 and at 38 years old, “A-10” remains relevant in the lightweight division. For his last two bouts, Miller has been matched up against young prospects in the division and in both instances Miller scores impressive knockout victories. Now though, riding his two-fight winning streak, Miller is hoping he can get another beloved veteran for his next scrap: potentially even the man he shares the UFC Wins record with.

“You’ve got [Joe] Lauzon and [Donald] Cerrone fighting and I don’t know what their plans are after that.” Miller said. “They’re both guys I’ve shared time in the octagon with. It’s like, I’ve got two [wins] against Joe – do you go and do it again? F*** yeah, we do it again. I love that guy. If we could sell it and main event a small card because we’re two old guys that have been around for a while, then let’s do it and let’s get the main event bonus. And a guy like Cerrone, another one – I’ve got a ton of respect for him, and if he wants to do it, let’s do it.”

Cerrone and Lauzon are set to face each other in a lightweight bout at UFC 274 in May and as Miller pointed out, he has experience with both men. Miller faced Cerrone in the main event of a Fight Night card back in 2014, losing by head kick KO. Meanwhile, he has even more experience with Lauzon who he won decisions over in both 2012 and 2016, with both scraps taking home Fight of the Night honors. A rematch with either man would make a lot of sense for Miller’s 40th fight in the UFC. And at the rate he’s going, Miller’s plan of making it to UFC 300 is looking ever more possible by the fight.

Ouch. Jamie Pickett reveals he tapped out to D’arce choke at UFC Vegas 48 after nearly biting off his own tongue.

Disgust. Israel Adesanya says it was ‘disgusting’ for Kamaru Usman’s ‘peanut head’ manager to push for fight: ‘This is bigger than us’.

Khamzat Chimaev, Darren Till, and Alexander Gustafsson training together.

On To The Next One. Matches to make after UFC Vegas 48.

Thank you everybody who came out to @bareknucklefc , thank you to all the fighters I met this week. I got my feet wet. Y’all are soldiers. Let’s enjoy this time off with our families and get back to training. What we do in life echoes in eternity.

A lot of injuries this weekend.

Derek Brunson just needs a little DUST in his life.

Na paddy never called me out, we’ve talked some shit back and forth but we ain’t tried to set anything up. I don’t think I’ve heard him call anyone out. We’ll def meet in the future but that’s a fight night headline or Ppv card https://t.co/9FDBjpz1hH

Facts big man me and u can sell a ppv main eventing in a couple of years we will earn that real cash money https://t.co/KE9AwweuQ4

Charles Oliveira may not make it to his title defense against Justin Gaethje if he keeps this up.

It was a busy weekend this past weekend but frankly, it was a pretty good one. Though the three events that took place were a little short on name value, they all delivered, certainly beyond expectations. Here’s to hoping this weekend does the same.