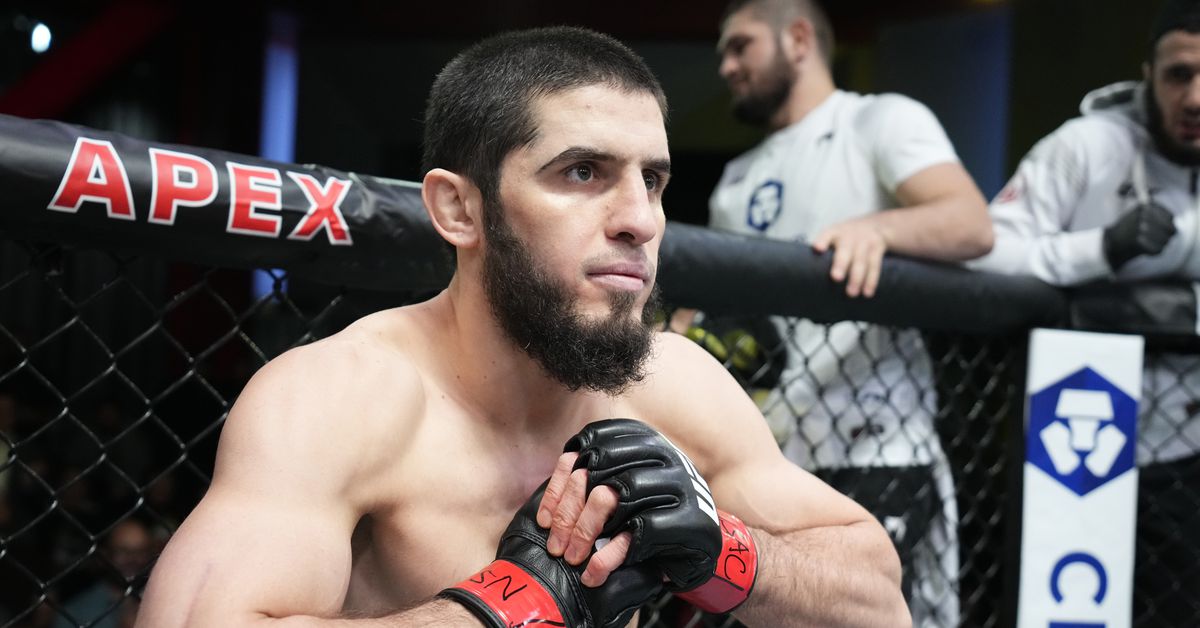 If his actions haven’t already spoken loud enough, Islam Makhachev wants to make it clear that he’ll go through anyone and everyone to prove that he’s not to be taken lightly.

As the UFC lightweight division’s current “Dagestani Destroyer,” Makhachev has won 10 straight bouts and only tasted defeat on a single occasion. Thus positioning him comfortably in line for the winner of May’s title clash between the champion Charles Oliveira and Justin Gaethje.

However, one popular Irishman is always a possibility to slide his way into the mix. But Makhachev isn’t worried about “The Notorious” and sees himself capturing and defending the title before a run at 170-pounds.

“They say Conor [McGregor] is maybe going to come back and fight for the title,” Makhachev told ESPN. “When he fought last time in the lightweight division and won was 2016? Five-six years ago. I’m gonna take this belt, defend 35 times, and I’m gonna come to the welterweight division.

“I was there when [Jorge] Masvidal faced Colby [Covington]. These guys… These guys… Colby, he has just wrestling. He is very slow in the ring. His striking is slow. Other guy, Masvidal, I think he’s so old now he just makes some money, maybe a couple more fights, he’s gonna retire.”

Makhachev’s 10th straight victory out of his overall 22 came in the main event of UFC Vegas 49 two weeks ago opposite Bobby Green. Needing just three minutes and 23 seconds, Makhachev finished Green with strikes on the ground in a bout that was originally supposed to see him square off with Beneil Dariush. Dariush sustained an ankle injury which would prove to be a setback for MMA.

This past weekend, Rafael dos Anjos, a past booked opponent of Makhachev’s, needed a fill-in of his own after Rafael Fiziev tested positive for COVID-19. Before negotiations ended, Makhachev made a statement on Twitter that he was interested in the job. On The MMA Hour on Monday, dos Anjos claimed that Makhachev requested $1 million for the short-notice meeting.

“Dana [White] said I turned down this fight but Monday morning when I wake up, I just saw some news like Fiziev had COVID, the fight is canceled and I’d been in California on vacation and I wake up and call my manager,” Makhachev said. “‘Hey, Ali [Abdelaziz]. I saw some news. Please call UFC and say I’m ready for take this fight.’ I asked about some conditions but very small conditions, nothing big that wasn’t possible to do. UFC [didn’t] Call me. Not Ali. I wake up, and Ali calls me. I ask him to talk with UFC. But UFC not do it. That’s why the fight didn’t happen and that’s it.”

Admitting wanting to help out the fans and a big UFC card, Makhachev now feels he’s being looked at as “the bad guy” in a sense. He now has a greater confidence in the outcome of his fight against dos Anjos, with whom he was matched up on three occasions.

“But now everybody thinks UFC called me and tried to make this fight but I call UFC and I ask about this fight,” Makhachev said. Anyway, I sat in the first row and watched this fight. Dos Anjos not have what it takes to be a good fighter? If I beat him, people will still be talking like, ‘This is old man, he’s not from top 5.’ Now Dana says, ‘Islam has to fight vs. Dariush.’ I have no problem fighting him but who has to fight for the title next? I don’t know. [Dustin] Poirier? He lost many times. [Michael] Chandler lost. [Dan] Hooker. Tony Ferguson. Everyone — “RDA” has only two wins in four fights. [Gregor] Gillespie fought once in the last three years. Who has to fight for the title? I don’t know.”

Window. Kayla Harrison begins to worry she’s going to miss out on the opportunity to prove she’s the best in the world.

Takeaways. MMA Fighting’s Shaun Al-Shatti looks at the beginning of the end of an era following UFC 272.

Old. WWE champion Brock Lesnar closes the door on a return to MMA.

On to the next one LIVE.

He cant save you. One gold medal Havin ass. @HenryCejudo https://t.co/99s53m78Lk

But so is Cyborg…

No. Ronda used to refer to me but never really wanted to face me. You remind me Ronda.

Nah. I blocked her cause she. Could have signed with @BellatorMMA and made the fight but didn’t

Tell me you only got 50K followers without telling me you only have 50K…engagement farming is so basic https://t.co/dz7pPsbd4q

I am just starting pic.twitter.com/b5V6qthd30

Elliott is right back at it!

Triple OG @TElliott125 back in the gym already. I want to be like you when I grow up dawg! pic.twitter.com/2LYhnQEbNJ

Monday Muay Thai with “The Dominator.”

Happy anniversary to one of the greatest fights we have ever seen pic.twitter.com/zVPSSdt3Qa

I think I could help Jorge become a more technical fighter. He’s too smart.

I’ve always had so much love for that dude. It’s a shame that we have not been able have that kind of relationship. My door will always be open for @GamebredFighter.

Man, Islam vs. Colby is a pretty fascinating matchup. I kind of hope we get to see it someday now. It’s certainly far more interesting than Usman vs. Canelo…