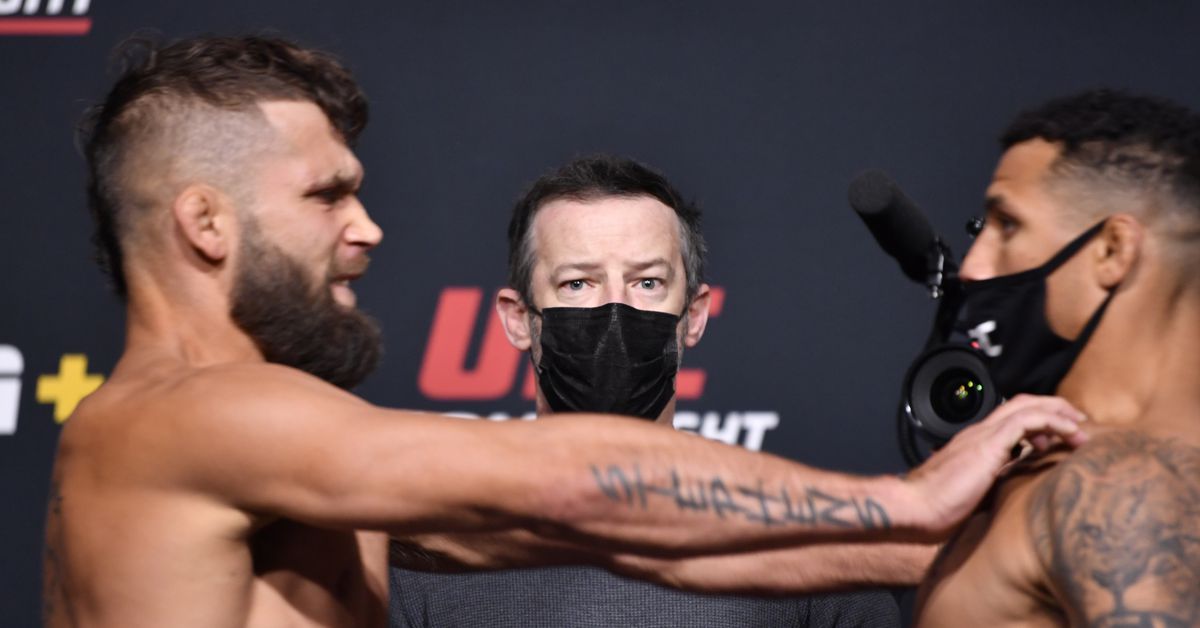 A year after Drakkar Klose’s canceled Jeremy Stephens bout, he’s still feeling the effects of the weigh-in shove that called things off in the first place.

Klose, 34, has had three fight cancelations since his Mar. 2020 epic with Beneil Dariush. Looking to rebound off the second-round knockout loss, the South Haven, Michigan native will return against Brandon Jenkins at UFC Vegas 51 this Saturday night. Unfortunately for Klose, he admits to not being fully fit to compete.

Stephens’ shove at UFC Vegas 24’s official weigh-ins left Klose unable to make the walk the night after as he suffered a cervical sprain of the neck and a concussion. Klose revealed to reporters that he worried about his future and was afraid he might never be able to fight again.

“The damage was done, I’m still not 100 percent from that. It’s something I will probably need surgery on eventually,” Klose told BJPenn.com. “I told myself if I have to get surgery, I’m just going to call it quits. I’m just trying to control it, do therapy, and everything else. I did think that was going to be the end of me. It was a serious problem. I had terrible headaches and neck issues. My doctor suggested that I fuse my neck. I was not interested in hearing this. I want to go out on my terms, I don’t want to go out with the doctor telling me I can’t do this. It was a herniated disc, C6, C7, as soon as it happened my whole arm went numb, and later that night, things weren’t right and I woke up couldn’t open my eyes, a real bad headache.”

Klose’s loss to Dariush was only the second in his 14-fight career. Klose is showing real promise in the Octagon with wins over Lando Vannata and Bobby Green.

When it comes to sympathy received from the promotion, Klose didn’t feel much was received. It was actually the exact opposite.

“There’s a lot more stuff I might say after I quit fighting, but they pay me so that my mouth will stay shut,” Klose stated. They gave me their show money, but never spoke to me. To me, it’s kind of ridiculous, he really f***** me up. I can remember crying on the way home from that fight. I don’t even know why, but it was so overwhelming. They don’t even care that it’s their business, so they will take over my place .”

Revenge. Gilbert Burns is seeking a rematch against Khamzat Chimiaev, after being denied a five-round fight.

Motivation. Corey Anderson reveals what Daniel Cormier told him, which changed his life and career.

Return. Alexander Volkanovski – Henry Cejudo “still has to prove himself” in the division, even if he joins USADA.

Beef. Belal Mohammed would love to have a chance at Colby Covington.

Well isn’t there egg on my face…congrats mate, I have recently had a perspective change.

Just signed my new contract with the @ufc. Iron Lady is here to stay pic.twitter.com/pmDGewHMBy

You think I give a shit about someone not agreeing with me? We fighters are constantly disrespected by you and josh. That’s where you both annoy me. Especially Josh, as a former high level athlete

Careful, Davion. Davion has been through so much!

So I stopped by the @JacksonWinkMMA gym and @BellatorMMA heavyweight @DavionGoAllDay picked me up like I was a child! @drbeauhightower pic.twitter.com/WtF1D1wJgp

RIZIN 35 is the best event this weekend and it’s not even close. Have a great Friday Thank you for reading! Enjoy the weekend full of fun and excitement.