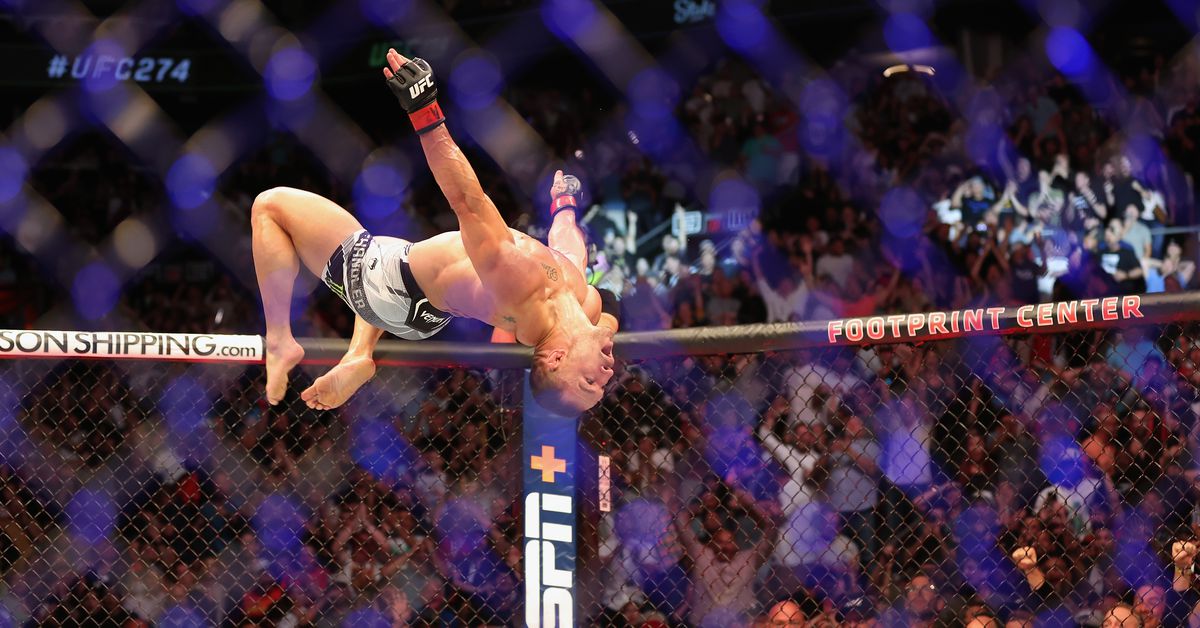 Daniel Cormier believes that Nate Diaz may have finally found the perfect opponent for his final UFC fight.

This past weekend, Michael Chandler stole the show, turning in a Knockout of the Year contender when he flatlined Tony Ferguson with a front kick at UFC 274. Following his win, Chandler called for a fight with Charles Oliveira or Conor McGregor, but it was the man who called him out that got Chandler’s attention. On Tuesday, Nate Diaz took to Twitter where he told the UFC to send him a contract to fight Chandler, something Chandler was quick to run with as well. It was also the right decision for Daniel Cormier (the soon to be UFC Hall of Famer)

“I think Nate Diaz has finally got it right,” Cormier said on his YouTube channel. “Nate Diaz finally has a goal that will give him the greatest chance of success. It’s you. It’s my boy Michael Chandler.

“After what Chandler did to Tony Ferguson, I still look at the matchup, and within that matchup I see places for Nathan Diaz to find success. Why? We saw Tony Ferguson, for the first time in many, many fights, land something significant on someone, knocking my boy Chandler down. Why? My boy Chandler kind of stands in front of people. If you know Nathan Diaz, he’s constant pressure, he’s in your face, he’s boxing you up, and he’s long…

“I know Michael Chandler is a ton of bricks, he’s a monster for the weight class, but if Diaz can go up to 170, be tough enough and durable enough to go 25 minutes with Leon Edwards and lose pretty much the whole fight and then hurt him at the end in the way that he did, he can fight a 155-pounder at 170. He isn’t so depleted that anything Mike throws at his head will cause him to be hurt

“I’m not by any means saying this is an easy fight for either guy. This is my opinion that Diaz has the best chance to achieve sustained success in this matchup of all those we’ve seen him tied to. Although Mike may be a little shorter than Mike, Mike has a great ability to strike and, as most wrestlers know, striking is all they want. You’ll also see Chandler striking for long periods of time which is a benefit to Diaz.”

Diaz has not fought since June of 2021, a loss to Leon Edwards, but it’s not for lack of trying. Diaz has repeatedly angled for fights, most notably against Dustin Poirier, but with the Stockton native on the final fight of his current UFC deal, the company appears unwilling to book that matchup, despite both men calling for it. Instead, rumors have circulated that the UFC is hoping to book Diaz in a trilogy bout against Conor McGregor, when McGregor returns from his injury. With the fight not yet scheduled and Diaz apparently uninterested, Chandler may be a viable backup option for UFC. The former Bellator lightweight champion is a rising star within the UFC. And Cormier believes it is time for the Diaz and the UFC to get the ball rolling.

“Is Nathan Diaz going to be beaten by Michael Chandler? Absolutely. But I think in this matchup, I think this is the best matchup for Nate to try to find success, because he’s a massive name, but even when you’re a massive name, you have to have a name that stands alongside you that brings something to the equation. You don’t expect Diaz to just come in and fight anyone. After what Mike did last weekend, Michael Chandler is deserving to stand across the octagon against one of the biggest stars in the UFC…

“If I’m Nate Diaz, and as unhappy as he has seemed for all this time, I’m calling the UFC right now and saying, ‘Hey, let me get Michael Chandler. That’s the fight I want.’ And if I’m not too stupid, I think the UFC would be happy to oblige and put it on one of those big cards in July, August, where those guys can go out there and put on a show because it’s going to be an absolute barnburner. So Nate Diaz, call the UFC. I am sure they will listen.”

No Bets. Breaking down the best bets available for UFC Vegas 54.

How Not to Make Weight Ladies & Gentlemen. Shoulda Stripped Em’ Like They Did @CharlesDoBronxs Shout Out To All Those Doin’ It Right & Keepin’ The Sport Clean – Champ -CSO- # CuttingWeight Feeling Great @espnmma pic.twitter.com/2WxzhYtjOT

Tony please stop. Go and sit back for a little, tuck your head in a hole somewhere. Relax, men. Spend some quality time with your loved ones. Like just please stop! I plead with you. This is not an acceptable look. Like you’re making me sad. https://t.co/2qyGp3XmZE

Lay Off The Yay Buddy Not A Good Look You Make Yourself Look Sad. I’m already back to work I don’t quit like you Enjoy your retirement with Fathead -CSO- # pic.twitter.com/iAxyYtuThI

20th UFC fight?! It’s crazy how fast time goes. Guess that’s what happens when you get signed at 1-0 and take every short notice fight available. A lot of work in 8 years especially considering I had 4 fights in Invicta the year I was cut. Crazy journey, here’s to 20 more. pic.twitter.com/rJzFAMxF32

We’ve had 2 fights turned down by their agent but I think we finally got one. Fight news soon

I love my job pic.twitter.com/mAr4A3FAH0