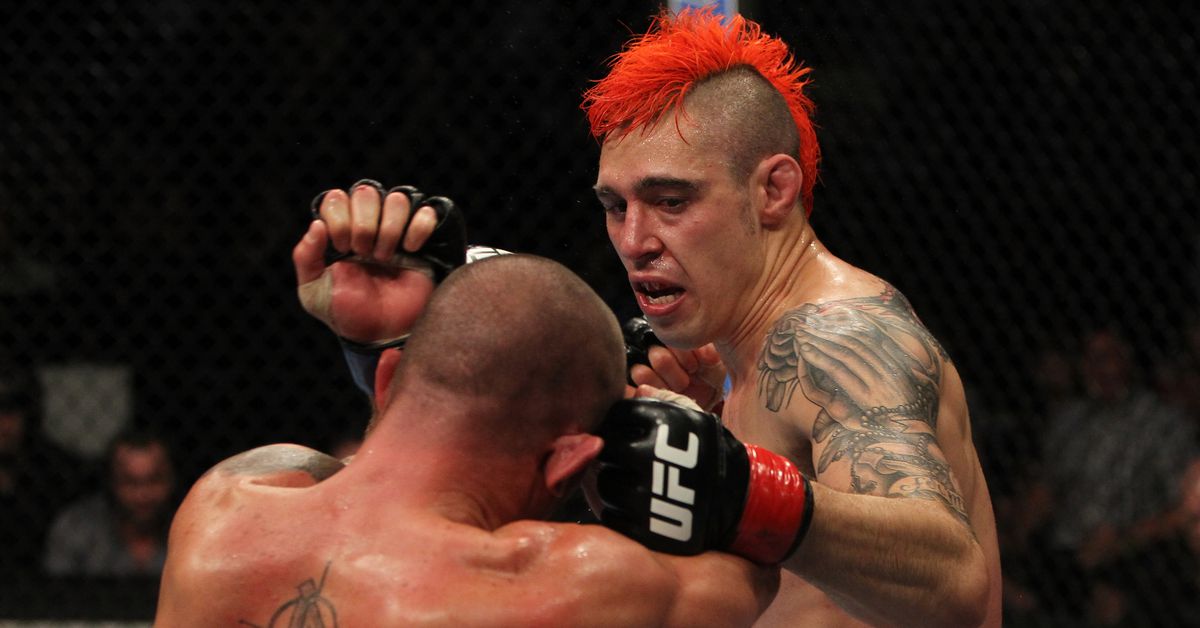 Imagine a world where MMA retirements actually last. Is such a thing even possible? It’s impossible to know. But for Dan Hardy, it’s simple: just don’t retire at all.

The former UFC welterweight title challenger turned color commentator’s career isn’t officially over despite having not fought in what will be a full decade come Sept. 2022. If that was the case and Hardy was done for good, however, he’d go out on a two-fight winning streak with his final two victories coming against Duane “Bang” Ludwig and Amir Sadollah.

Hardy’s hiatus from competing stemmed from his diagnosis of the heart disease Wolff-Parkinson-White syndrome in 2013. The 39-year-old Brit has always expressed interest in returning to action at some point during his time commentating in the UFC but nothing ever came to fruition. He was released from his contract in May 2021 and now hopes to really make some movement towards fighting once again.

“I love to keep in shape,” Hardy said to The Schmo . “I talk about having a fight in boxing. This was my first priority for June. But we’re trying to figure out an opponent at the moment. I’ve had quite a few options but it’s not Tyron Woodley (laughs). He’s fallen off the face of the planet. Never hear from him anymore. So I don’t know, we’ll see. Boxing, maybe. Kickboxing, maybe. We’ll have to wait and see if MMA is possible.

” One of the events you covered was in contact, in fact. We’ll watch to see what happens. No [not bare knuckle]. Spread my wings, you know what I mean? This is what you know. I can’t tell [the world] yet. You need more conversation to see my progress .”

It shouldn’t surprise that the fan-favorite knockout performer would make his way to Eagle FC, given the number of notable signings. Former UFC stalwarts Kevin Lee and Diego Sanchez headlined their most recent event while during fight week it was announced that the likes of Hector Lombard, Thiago Silva, and former heavyweight champion Junior dos Santos will debut in the near future.

Prior to that, another former champion in Rashad Evans ended his four-year retirement to compete, and win, at Eagle FC 44 in January against Gabriel Checco. Surely if “The Outlaw” has his way, he’ll extend his winning streak to three by the end of 2022.

” I’m always going to tease it,” Hardy stated. “I’m never gonna retire. Never ever. I’ll be having these conversations at 60 but hopefully, I will have fought by then (laughs).”

Next. Gable Steveson retires from wrestling after winning second NCAA title as he moves onto WWE.

Interim. Dana White believes another title for interim heavyweight is possible as Francis Ngannou has recovered from his knee surgery.

The rise of the Lioness.

Amanda Nunes begins her road to the UFC Bantamweight title,

when she finishes Shayna Baszler with repeated leg kicks pic.twitter.com/S6uY2ffd00

Paulo is looking for Strickland.

@Topuriailia wants that fight with @TheUFCBaddy so much he was offering out his hotel room number on Saturday night..

Jared Leto, I invite you to come and practice the part with me! @jaredleto
https://t.co/NYbbYwCHp6

I wish I was gettin paid that are yous for fucking real?! https://t.co/1lAHPIHchK

Does anybody love Korean kangaroo ? We about to come some on April 9th. #andnew pic.twitter.com/AS7HG9puMe

Fought a ranked guy and hopefully showed I belong at this level. We go again….il get my big moment. @ufc pic.twitter.com/ShXQyuxtYi

Approx 5 years ago, after I won my fight in Manchester, a 16 year old kid asked me for a pic. He told me he’d be in the @ufc in a couple years. He wasn’t the 1st to tell me this but he’s 1 of the 1st to make these words come true. Congrats @muhammadmokaev #mma #ufc #thefuture pic.twitter.com/P6W6EXOBLa

Thanks so much for reading!