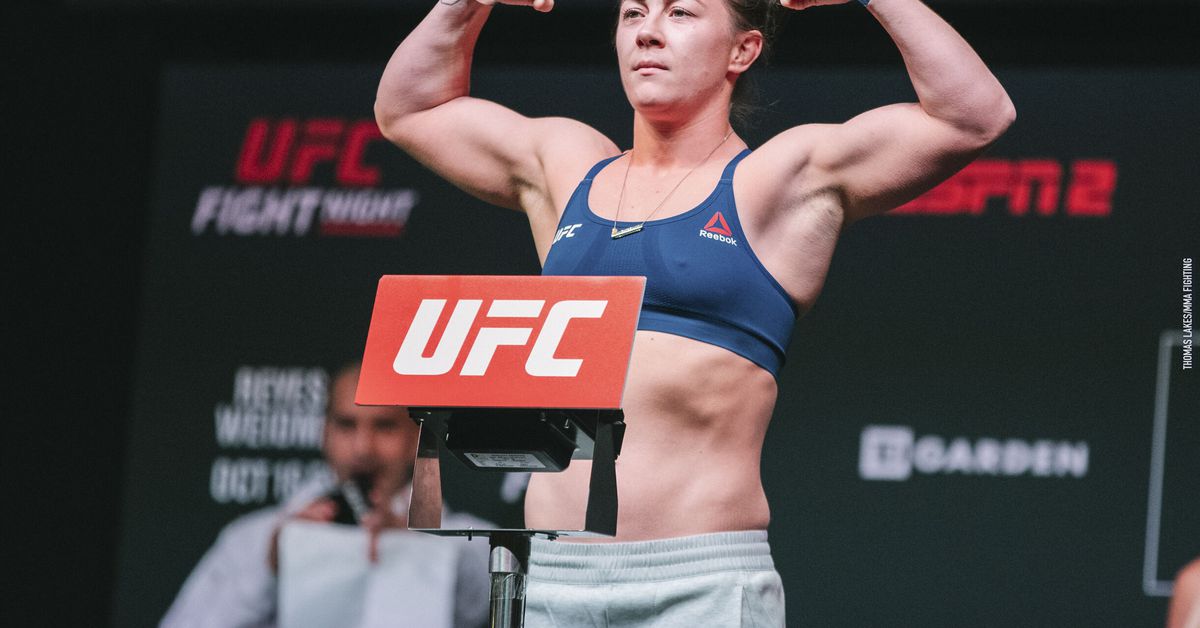 Molly McCann believes she’s turned a corner in her UFC career and it’s upwards and onwards from here.

McCann takes on Luana Caroline in UFC London’s feature flyweight fight. This will be McCann’s first appearance on an English UFC maincard. McCann will fight on British soil for the first time in almost four years. “Meatball,” however, couldn’t be more happy about this.

“I just feel at peace and content,” McCann told Ariel Helwani on The MMA Hour. McCann said, “I have finally reached that point again when I am excited to fight and don’t fear either the walk or the occasion. I’m home. Well, London’s not home, but we’re in England, so it’s very, very nice to be able to say that, and not have to travel to America or to fight in Ireland. It’s not that I dislike fighting there, but it does make the preparations a lot simpler.

” I don’t mean to be negative, my emotions towards the fight are always a battle in the camp, but it was after our last fight with [teammate Paddy Pimblett also on the card], that we felt at home. This time, however, feels like the same. I just feel like I’ve arrived. It doesn’t feel scary anymore. I know that this is where I am supposed to be. It’s like I was meant to be there. I feel like I’m a part of the furniture now.”

Entering the UFC in 2018 fresh off winning the Cage Warriors flyweight title, McCann came with a large following and big expectations, but she’s had an up-and-down run thus far. Losing her debut fight to Gillian Robertson, McCann won three in a row before lose a pair of bouts to drop down to 3-3 in the organization. However, McCann was able to right the ship her last time out, taking a unanimous decision over Ji Yeon Kim in September, and now McCann believes she has achieved a level of inner peace which is going to help her build on that win.

“This is my eighth fight in the UFC,” McCann said. Sometimes you have to be true to yourself in every day life. Sometimes you might get that little bit of imposter syndrome, and I think it’s just important that sometimes I have to sit back and look at all the training sessions I’ve done, how hard I’ve worked, and I’m like, ‘Why do I worry about getting in there? It’s okay to just do my best. I enjoy every fight and the effort that went into it.

“It’s the O2. It’s London. It’s full. We’re finally getting the Patrick Pimblett walkout that the U.K. fans have been waiting for all these years. I’m here. We’re all here. It is just unbelievable. It’s not that I am being self-centered, arrogant or arrogant. I just want to be here and enjoy the moment, knowing I have worked hard for it. I’ve never had such clarity before and I think it comes down to the experience, the time served in the octagon, and being at peace with myself a little bit and at peace with the fact that I’m very comfortable with fight I.Q., and fight awareness, and what I know I can bring when I have 18,000 people screaming ‘Meatball.'”

Another factor adding to McCann’s peace of mind heading into this bout is greater financial stability. McCann earned a $50,000 Fight of the Night bonus for her most recent bout against Ji Yeon Kim this past September, and as she approaches her bout this weekend, “Meatball” admits that the extra money has removed some of the pre-fight worry about winning.

“Three years ago I was fighting for 10 and 10 [$10,000 to show, $10,000 to win] and when you pay tax and pay everyone out, there’s not a lot there so you still have to worry about sponsorship and things,” McCann said. McCann said, “I am not playing ball at all by any means.” However, he is content in knowing that my bonus will be sufficient to get me through the fight this year. So I don’t have to worry about, ‘What happens if I lose and then I haven’t got that money?’ These are kinds of things maybe fans would never think because you see us on the TV and you see us very active and about and you think, ‘They must be rolling in it,’ but you know that’s not the truth.”

“The UFC were very complimentary with the contract I was given and I know if I get a few more finishes, or if I finally get this first finish in the UFC this weekend, I can imagine the next contract will be a nice lucrative one,” McCann said. I’m very happy. The company treats me really well and respects me and gives me a good platform to be me.”

UFC London takes place this Saturday at the O2 Arena.