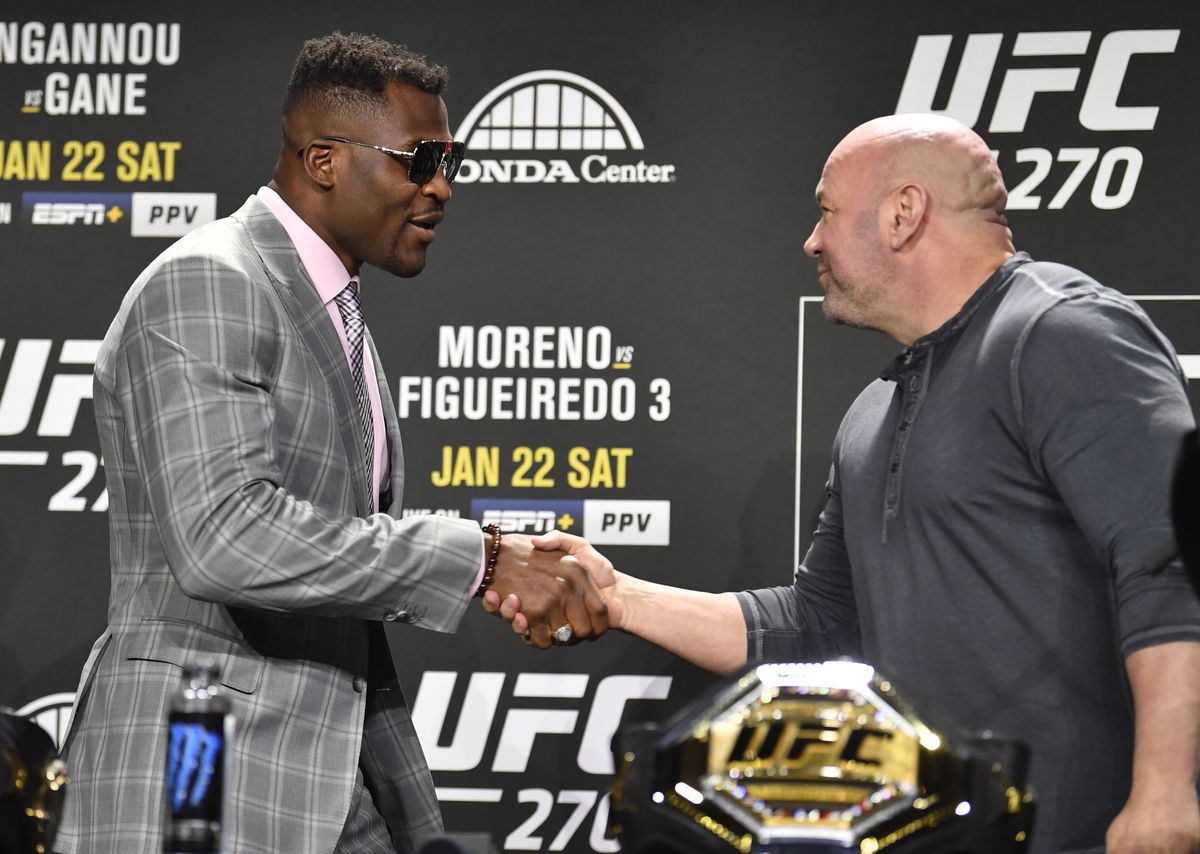 Even given the chaotic nature of the MMA business, it’s unlikely we’ll ever see a five-month stretch like we just saw in the first half of 2022.

Not only did we see a UFC champion lose their title on the scale for the first time ever, we also had Francis Ngannou stay one step ahead in his ongoing battle with the promotion, Khabib Nurmagomedov‘s Eagle FC promotion emerge as a major player with its U.S. debut, the regrettable escalation of the Colby Covington–Jorge Masvidal feud, the truly harrowing Cain Velasquez attempted murder case, and that’s not even mentioning in-cage happenings like Michael Chandler recording one of the best kick knockouts of all time and Carla Esparza breaking the record for the longest span between UFC title wins after defeating Rose Namajunas in arguably the worst championship fight ever.

With that in mind, it truly feels like anything can happen before the year is through so the MMA Fighting Team of Alexander K. Lee, Steven Marroco, Damon Martin, and Jed Meshew got together to make our best guesses as to what craziness could be left to unfold in 2022.

Don’t forget to check our Mid-Year Awards for the best fights, knockouts, submissions of the year and the memorable moments that stood out from all the rest.

And for more 2022 Mid-Year Predictions talk, listen to our companion podcast below, on Apple Podcasts, Google Podcasts, Spotify, iHeartRadio, Stitcher, and wherever you find your favorite podcasts.

Martin: UFC heavyweight champion Francis Ngannou is in the rarest of positions where he actually maintains some leverage over the promotion, albeit not enough that he really holds an advantage over it. That said, Ngannou’s fight for a better contract — a more lucrative deal with options that would allow him to pursue fights like the one he wants against heavyweight boxing champion Tyson Fury — still puts him in an advantageous position where he can just walk away from the UFC after December when his contract expire and become an unrestricted free agent.

While Ngannou would be the most highly-sought-after fighter in many years, it seems unlikely that UFC will ever permit a human highlight video and one of history’s most valuable fighters to walk off unfettered.

Instead, it’s much more likely that the UFC strikes some sort of deal with Ngannou that includes a whole lot more money up front for each fight, plus extra incentives through pay-per-view while working hand-in-hand with the ferocious heavyweight to book a special rules fight against Fury in 2023.

This may seem unlikely considering the UFC’s policy of preventing fighters from competing in the Octagon. However, Ngannou has the rare chance to achieve what he desires without having to give up control. Ngannou would likely be at disadvantage in a fight against Fury, who is a complete novice to combat sports other than boxing. However, Ngannou could benefit from a special rules bout where he can use four-ounce gloves, and possibly strike from the cage.

Like when Conor McGregor could fight Floyd Mayweather in a bantamweight bout, so the UFC is likely to be a major sponsor and co-promoter of the event.

The last thing to mention about Ngannou’s likely return to the UFC after Fury’s fight is the outcome.

Ngannou isn’t ready to retire just yet so he will still want to fight and prove himself against the best heavyweights in the world, which brings him right back to the UFC. Sure, Ngannou could get paid six figures to try and launch Ryan Bader’s head into the atmosphere, but it doesn’t seem likely that Bellator could afford him in the long run.

Is there anyone who will stay up past six in the morning to see Ngannou take on Arjan Bhullar. What about Ngannou taking part in a yearlong tournament to have a shot at fighting Bruno Cappelozza.

Ngannou has another huge fight on the horizon, if Jon Jones makes his comeback as a heavyweight. This is the UFC’s biggest promotion, other than McGregor. It provides Ngannou with a great incentive to continue his UFC membership.

Lee: Here’s an idea that I know will appeal to would-be Bellator MMA (pardon me, Showtime MMA) President Shaheen Al-Shatti.

Look, I’ve been staunchly against the notion that open scoring will be this cure-all for questionable judging (a problem that isn’t as widespread as people think) and confusing scoring (just read the damn criteria! ), but that doesn’t mean I think it isn’t worth trying in MMA. This is great! Invicta FC did some experiments with it and the results were clear. The corner was informed the scores, and they had the option to give that information to their fighter between rounds.

Putting aside the controversy, it’s fair to say that Bellator needs a shot in the arm with promotions like the PFL and Eagle FC gaining a serious foothold in the U.S., and what better way to at least get folks talking about you than with gimmicks? Shockingly, the Ryan Bader-Cheick Kongo rematch and an interim welterweight title bout between MVP and Logan Storley didn’t exactly set social media ablaze, so why not jump headfirst into the discussion that has divided us as an MMA nation?

With respect to Invicta there are many fans who don’t know they’ve played an active part in the open scoring debat. So while Bellator might not be the first to promote it, it could be for a significant portion of potential viewers. This is not about ratings but rather getting people to talk about the former de facto No. 2 promotion in North America for years. Plus, if actual Bellator President Scott Coker (sorry, Shaheen) can promote his organization as doing something that the UFC isn’t doing, that’s a major plus.

Imagine a potential slogan. Bellator – We have the score. Not enough dollar sign emojis for this.

All of these require cooperation from commissions. However, Bellator maintains a good relationship with many state commissions (MoheganTribe Department of Athlet Regulation, I’m looking at YOU) which could spark change in an industry that moves slowly when updating regulations and rules.

At the most, it’ll be fun for another prominent organization to try their hand at open scoring and offer fans and media an honest assessment (good or bad depending on your point of view) on a topic that has been largely theoretical. The likes and retweets are there for the taking and I expect Coker and company to make a grab at them.

Meshew: As the conductor of the “Bullet” train and the lead driver of the Shevy Truck, I felt it my duty to make this prediction because it’s less of a prediction and more of a certainty. It is happening.

With six defenses of her flyweight belt, Shevchenko is already one of the most accomplished champions in UFC history. After she beats Taila Santos at UFC 275, Shevchenko will move to a tie for fifth all time in title defenses in the UFC, and tie Amanda Nunes’ record for most title defenses by a woman (notably, Nunes did it in two divisions). Shevchenko will also have defeated the four top contenders of her division, something that no active champion has ever done. That is the textbook definition of cleaning out a division and given her level of dominance and the lack of interesting challengers at bantamweight, it seems inevitable that Shevchenko will face the winner of the bantamweight title rematch between Julianna Pena and Nunes. And when she does, she’s taking home a second title, regardless of who she takes it from.

Shevchenko has faced both Nunes and Pena before (Nunes twice) with different outcomes. Pena was handled by Shevchenko with relative ease during their one-off encounter. I don’t see any reason to expect things to change a second round. It’s slightly different with Nunes. “The Lioness”, Shevchenko has won two bouts, but both fights were close. Shevchenko may have even won their rematch. Shevchenko’s performance has improved over the years, while Nunes seems to be in decline based on Pena’s loss and split with American Top Team.

Could the UFC decide to run back a trilogy fight between Pena and Nunes (if Nunes wins the rematch) or plug in Ketlen Vieira for the next title shot? Sure, but why do that? If Nunes wins, she is basically “righting the wrong” of her loss and so an immediate trilogy doesn’t make sense. As for Vieira, she isn’t a fan favorite, plus she’s coming off a snoozer of a fight that many people seem to think she lost. Neither of those fights are marquee matchups that will get people talking, but a third fight with Shevchenko, the most dominant champion in the sport and the top pound-for-pound fighter, that is bank. And given that Shevchenko just starred in a movie with Halle Berry, I suspect the UFC is a lot more interested in giving the Shevy Truck the full promotional push. My only concern is whether or not the UFC will continue to have the featherweight division in order for Shevchenko become the first champion of three divisions in UFC history.

Nick Diaz fights Kamaru Usman, who then holds out for a new contract that includes boxing

Marrocco: Fast approaching welterweight GOAT status, Kamaru Usman has beaten his top opposition in Jorge Masvidal and Colby Covington and wants to make the biggest paydays. Leon Edwards is clearly the legitimate contender. However, that hurdle has been cleared by Usman and Khamzatchimaev makes it worth considering a more gentler alternative. Far gentler, to be specific. Nick Diaz is 38, slowed by decades of combat and still popular enough to get the casuals’ wallets out. He is, in other words, the perfect opponent before the next big money jump: boxing.

Usman may not have a shot at getting in the ring with pound-for-pound great Canelo Alvarez, unless, perhaps, Gennady Golovkin embarrasses him so thoroughly that an ego-boosting thump of Usman is just the ticket. He will try to secure the UFC’s approval to box. With Francis Ngannou, his colleague, eyeing sweet boxing revenue splits and Usman wanting more, he may wait to negotiate a better deal. The UFC will dangle superfights his way, which is how Diaz goes from totally out of left field and ridiculous to a real thing, and pressure him to fight Edwards and Chimaev. But he’ll hold out, to the mild chagrin of his UFC-friendly manager Ali Abdelaziz, and he’ll be the next crossover star.

Oh, and the fight with Diaz? He will fight Diaz if he gets to it. Mercifully, the elder Diaz’s career will be over.