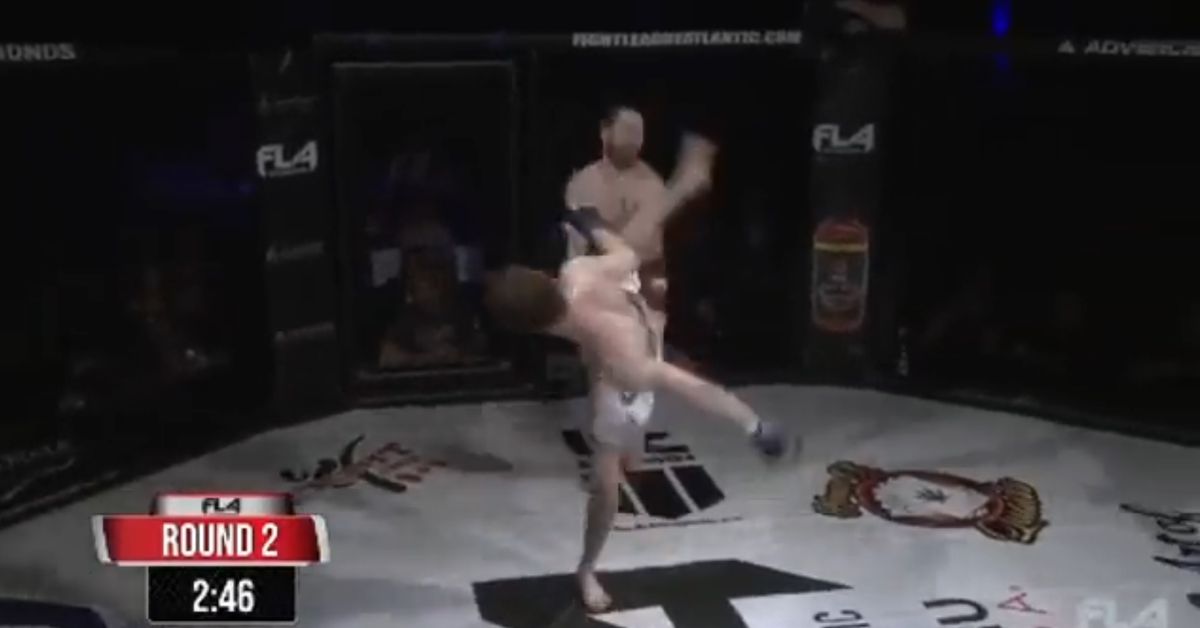 There’s something for everyone in this week’s Missed Fists grab bag, though you may want to check what you have in hand as you may find yourself watching a family friendly, highlight-reel knockout or an extremely not-safe-for-work injury.

Let’s first get rid of all the nastiness.

(Big thanks as always to @Barrelelapierna for their weekly lists of the best KOs and submissions, and to @Grabaka_Hitman for uploading many of the clips you see here. If you have the time, give them a like and join Twitter . )

I could not be happier starting us off in glamorous Moncton. You may remember New Brunswick’s “Hub City” as having hosted a UFC event in 2018 that actually turned out to be deeply significant in retrospect. Anthony Smith beat Volkan Oezdemir in the main event to earn a shot at Jon Jones, future contenders Sean Strickland and Calvin Kattar picked up big wins on the preliminaries and, most importantly, Artem Lobov fought his last MMA fight.

You can now add Dylan Sheppard and Moncton to their rich history.

The finish from Dylan Sheppard’s amateur debut at #FLA3 this past weekend . KO of the year? @Grabaka_Hitman (Video credit: Fight League Atlantic) pic.twitter.com/IQ1V9wZAda

Sheppard scored one of the cleanest spin kick knockouts in recent memory, blasting Dawson Sampson right across the face in the first bout of Fight League Atlantic 3 this past Saturday. Both men were making their amateur debuts and it was one they will never forget.

First, let me say that I’m only including these because of the constant prodding of actual devil Kristen King, who almost certainly enjoys writing about injuries more than should legally be permitted.

It’s our responsibility here at Missed Fists, to record the good and the bad. If you are smarter than me, or did your best to avoid these breaks, please know this is business.

This Farsaci fight was his first professional amateur bout. While I admire that he is made from tougher material than me, I ask that you tap for the sake of all that’s sacred.

Pablo Rios was not even fortunate enough for that opportunity.

There’s nothing to see, is there? Two fighters trade leg kicks. Then, just 17 seconds into the fight, the worst happens and suddenly we’re getting a close-up, lingering shot of Rios’ completely broken leg.

That’s it. I’m out. No more MMA for this guy. I leave this awfulness in your hands.

Let me just kick back for a second with the soothing sights and sounds of wholesome Australian backyard bare-knucklin’. Randall Ray sent this video, and it has a great finish with some beautiful sportsmanship.

Ray scored a terrible calk kick finish last season when it was the new craze. This led him to share his story about how difficult his childhood was.

That was fun, but I’m still struggling to shake off that injury imagery. Maybe a few quick KOs from South Korea’s Angel’s Fighting Championship can help.

Another brutal KO from AFC 19 earlier

Lee Jin-Young only needed ONE kick this morning at AFC 19 pic.twitter.com/WwDkhekinJ

That is the stuff.

The first one-shot finish featured there is courtesy of Dong Jo Joo, who squared Min Je Park up and leveled him with a punch on the button for a 20-second knockout.

You can watch the full Angel’s Fighting Championship 19 for free on YouTube.

OK. My stomach is settled. We can go back to appreciating the joo-jeet-zoo. And there was a lot of it to enjoy.

Beautiful submission by Luana Santos at #SFT34. The second Leg Americana submission in her career. She moves to 3-0 at 22 years old. @Grabaka_Hitman @Barrelelapierna @ChillemDafoe pic.twitter.com/hSpFTNFsZ3

You know, I’m something of an MMA expert myself, so here’s some free advice for Santos’ next opponent: Watch out for that leg Americana.

At a Combate Global Miami event, one of our coolest stories was that Claudio Quintana, Enrique Gonzalez’s teammate, stepped up to the headlining role on less than seven days notice and beat Ivan Castillo using a stunning armbar.

Claudio Quintana showed up this week to corner his teammate in the main event of Combate Global, his teammate had to pull out days before, so he stepped in and ended up armbarring Ivan Choko Castillo who was on a five fight winning streak. pic.twitter.com/AGhIwhrQSw

That’s six straight wins now for the Chilean lightweight, who hadn’t fought in over two years. You can read more about the circumstances surrounding Quintana’s last-minute appearance here.

In the main event, Pablo Sabori used a knee right up the middle to stop a charging Angel Rodriguez and capture a vacant lightweight belt.

Sabori was a difficult act to follow, as Luis Meraz won a vacant featherweight title and a Von Flue choke. And as regular readers know, we are legally obligated to feature Von Flues whenever and wherever they occur.

We are also obligated to feature any knockout that involves approximately a dozen punches landing on the button, as was the case with Aaron Canarte.

Our Did I Do Thaaat? Accidental Knockout of The Week comes from a Black Sea Fighter event (free replay available on YouTube) in Sochi, Russia.

I don’t know if Fedor wanted to land a perfect timed kick here. But he somehow managed to hit a perfectly timed, straight to the head knee and avoided being disqualified.

Unless you’re a JMMA fanatic, you might not realize that RIZIN occasionally holds their own versions of Fight Night events, such as Thursday’s RIZIN LANDMARK show. We got some delightful clips from this one too as Yushi displayed the beauty of swangin’ and bangin’ and Kleber Koike may have choked his way to a title shot.

In the main event, Koike picked up his sixth straight win, all by submission, and improved to 5-0 in the RIZIN ring with a rear-naked choke finish of an overmatched Kyohei Hagiwara.

That took Koike just 97 seconds and that performance only cemented his case for a featherweight title shot at Juntaro Ushiku. Koike told MMA Fighting this past February that he expects Mikuru Asakura (a guy Koike submitted at RIZIN 28) to get the opportunity over him, but it will be hard to deny Koike now.

No, that is not a typo. Teruto Ishihara is being featured in Missed Fists and he’s back in the win column.

“Yashabo” ended up headlining Urijah Faber’s inaugural A1 Combat show (available on UFC Fight Pass) after an originally scheduled flyweight title fight between Jesse Tafoya and Jack Duffy was postponed due to the fighters getting involved in a backstage brawl.

Ishihara was not disappointed, knocking Jose Hernandez out in round two with a furious knockout.

This is Ishihara’s first win since a unanimous decision nod over Rolando Dy at a UFC event in August 2017 and it snapped a six-fight winless streak. Ishihara is back in the win column, even though his plans for post-fight were scuppered by a minor setback.

Also should’ve mentioned he asked the ring interviewer to party with him and was swiftly rejected pic.twitter.com/pSUR770fsZ

David Benavidez – David Lemieux. Video of the best moments of the fight