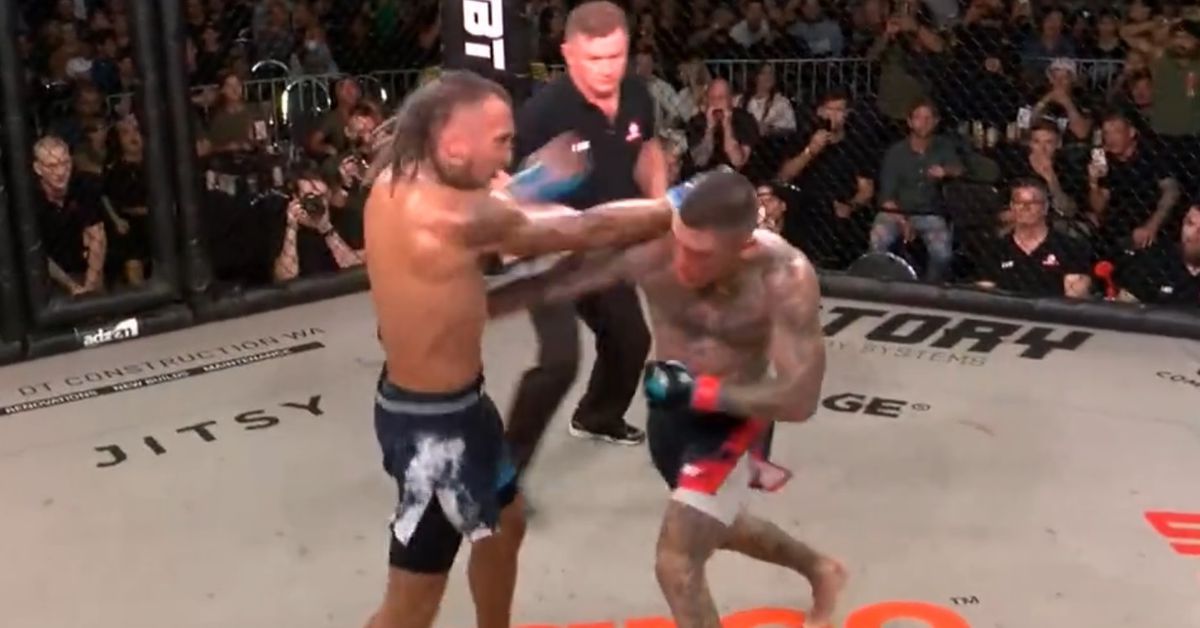 You can go on and on talking about the brilliant fighters that have come out of the Australasia region in the past decade and it’s important to remember that these elite talents didn’t spring up out of nowhere. They had to take their licks on the local scene just like everybody else before eventually taking over the world and you can bet there’s a whole legion of hungry up-and-comers waiting to join them at the highest levels of MMA.

Our first two featured fighters this week may never make it there, but even if they’ve peaked now, they put on a scrap that they can be proud of for the rest of their lives.

(Big thanks as always to @Barrelelapierna for their weekly lists of the best KOs and submissions, and to @Grabaka_Hitman for uploading many of the clips you see here. Give them a follow and chip in on Patreon if you can.)

Pardon the technical talk, but this fight was just plain-o insane-o.

The main event of Eternal MMA 65 in Gold Coast, Australia, saw lightweights Dimps Gillies and Josh Kuhne throw down for 15 bonkers minutes in a bout that wasn’t quite an all-out-brawl but it wasn’t exactly a technical masterpiece either.

Kuhne entered this bout with a spotless 3-0 record, with none of his opponents having made it out of the first round. He punches real hard, is what you can take away from that. So Gillies did what any smart fighter would do and just rushed him from the start, which Kuhne was more than happy to answer in kind.

Two minutes in, the commentary team went, “There’s no way they can keep up this pace for a whole fight.”

This was the best kind of back-and-forth fight as both guys had their moments, but we also got a clear winner as Gillies scored knockdowns at the end of the first and third to put an exclamation point on what has to be considered an upset victory.

Josh Kuhne vs Dimps Gillies has Fight of the Year written ALL OVER IT!!

Catch the #Eternal65 replay NOW ONLY on #UFCFIGHTPASS!!! pic.twitter.com/vVBDIfSzUi

Kuhne lost, but this will be a good learning experience for him and one day when he’s wrecking shop in the UFC or Bellator or the PFL, we’ll look back on this as the kind of firefight that forged him into a contender.

If you missed it, boot up that UFC Fight Pass and check out one of the best three-round fights of the year.

A highlight you won’t see on UFC Fight Pass was this spectacular knockout from Jillian DeCoursey, one of the best finishes you’ll ever see at 105 pounds.

@lionheartjill with a HUGE KNOCKOUT!

Lindsey VanZandt has been hit-or-miss since a promising 2019 campaign and that continued on Wednesday as she ran into a devastating right hand from DeCoursey that unfortunately left her defenseless against a couple of follow-up hammerfists. Credit to DeCoursey, knockouts don’t come much cleaner than that.

Invicta FC has bounced around on a few broadcasters recently, but you can check out Invicta FC 47 on their YouTube channel.

At a DEEP show in Tokyo, Makoto Takahashi improved to 13-1-1 and became the Japanese promotion’s undisputed flyweight champion with a gorgeous ninja choke of Yamato Fujita, who hadn’t lost since 2019.

“Shinryu” has now won seven straight fights, with his lone loss coming to a more experienced Tatsumitsu Wada back in 2018. He doesn’t turn 22 until July, so keep your eye on Takahashi.

Ovince Saint Preux and Mauricio Rua fought for a second time on Saturday in a bout that was so light on action that the fans in Phoenix actually booed both fighters. Booed “Shogun!” In this economy???

At least Shogun wasn’t knocked out like in the first encounter and if you’re wondering why we didn’t get an appearance from the infamous Shogun skateboard, it’s because it was back in Brazil at Standout Fighting Tournament Xtreme 7.

Gorgeous counter shot by Roque Junior here, but bad luck for Israel dos Santos that he fell victim to one of the most cursed items in all of combat sports. You can actually see it flying out of the cage there, ready to slide under another fighter’s feet and ruin their day. Who it will trip up next is anybody’s guess. Beware!

And now, some elite submission defense from Mehdi Zeidvand from a Samourai MMA show in Montreal.

Oof. That one is tough to watch. They say it’s rarely a good idea to try and slam your way out of armbars and triangle chokes, but at the regional level, you can do it and get results like this.

You know what else you see a lot at the regional level? Awesome knee knockouts. Case in point, here’s Jo Maisonneuve picking up her first pro win with a blistering strike right up the middle.

Speaking of brutal knees right up the middle…

Of course, this week’s “I Want You To Want Me, I Kneed You to Kneed Me” discussion wouldn’t be complete without Arturo Vergara, who landed a knee KO of the jumping variety that clocked in at nine seconds (!) at a Titan FC show in Florida

Tough to top that one, but still let’s give a tip of the cap to Rami Hamed, whose leg kicks had Jimi Alberto Diaz Zuleta saying “no mas” in the co-main event.

Titan FC 76 is available for replay on UFC Fight Pass.

Armfield is only 25 years old and it looks like he’s going to be a player in the endlessly deep bantamweight division.

Let’s go to Joel Bauman for this week’s sendoff as we watch a man go from getting a KO to talking about NFTs to TMI in the span of 15 seconds.