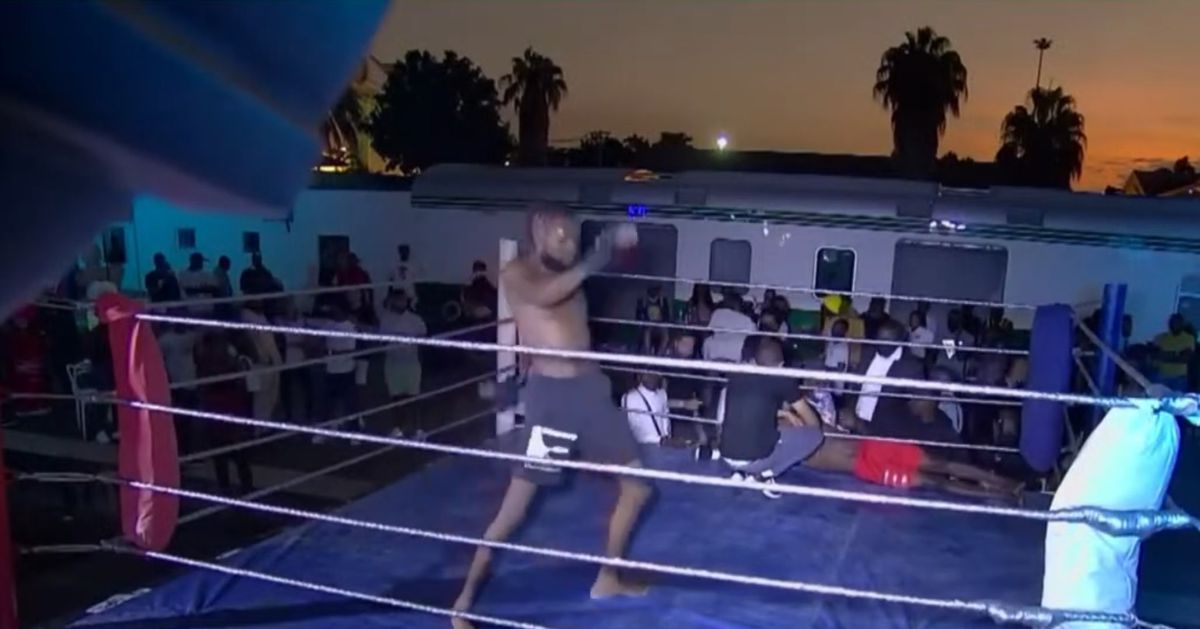 Missing Fists recently saw a renewed emphasis on highlight-reel finishes. This is refreshing from the strangeness that threatened to dominate headlines. (see: Grandfather and Grandson vs. Woman, referee stops intruders from breaking up intergender fighting).

But it was only a matter of time until our ever-vigilant gaze turned back towards the bizarre, so for those of you who favor oddities over offense, you can thank Mozambique’s Txaya MMA promotion for what you’re about to see.

AL: Let’s just be clear, nothing about this show looks legal per se, given that it’s happening in a ring set up at a train yard. Then again, where some (me) might use the word “questionable” to describe this shindig, others might consider it “quaint.”

Where I think we can all agree is that Bernardino Pereira taking what feels like 10 minutes to celebrate opponent Alberto Mangue collapsing from exhaustion is a bit much.

JM: Disagree. You know why? Because he COULD. That’s right, Pereira still had the energy to celebrate, which makes him a winner, at least on that night.

AL: The internet tells me that it was a little under 30 degrees celsius over the weekend in Maputo, which is not unseasonably hot, but probably not ideal for fighting outdoors. Especially for Mangue, who employed a grappling-heavy game plan in Round 1 and would probably have done the same in Round 2 if his gas tank wasn’t wiped out after just a few minutes of action.

You see Mangue’s mouthpiece fall out and the referee immediately calls for a break, which turns out to be a permanent one as Mangue just cannot go on. He slumps down to the canvas in frightening fashion and then Pereira proceeds to bust a move, pose for pictures, and of course, do the Conor McGregor “Billy Strut” (stolen from Vince McMahon, never forget).

I’m pretty sure I saw the Batista entrance in there too.

JM: Sometimes you’ve just gotta have fun with it, and when you’ve won the world’s worst version of Kimbo-Dada (a top 5 fight of all time) that’s one of those times.

AL: I think it’s during the strut that someone finally tells Pereira to chill the f*** out. Like, guy, I know you’ve got a lot of energy still, but maybe step out of ring for a minute and do a few laps or something.

Fortunately, Mangue eventually rolls out of the ring and stands on his own power.

We love the walk-off, but how about the strut-in?

JM: Casual is the perfect word to describe the whole thing. Hell, the KO shot barely looked like a punch. I’m pretty sure I’ve booped my dog on the nose more forcefully than that. Just goes to show you that striking, like real estate, is all about location, location, location.

AL: At that same show, Zoran Milic sent Anton Larsson tumbling with a quick teep followed by a left hand on the button.

JM: My man had an equally casual teep there, but that left hand was much more aggro.

After an egregious fence grab by Loveth Young, Jaqueline Amorim gets the kneebar to win the LFA Strawweight belt. Amorim is now 5-0 with 5 first round finishes in only 5. 5 minutes of total cage time! pic.twitter.com/kCgRXNtKeB

Amorim fought a Young-style fence grab and some stiff hammerfists to make this finish sweeter.

JM: As the old saying goes, cheaters never prosper. In reality, cheaters can be among the richest people in the world, and certainly in MMA. But it’s nice to know that this saying does hold true.

AL: Young has been the hammer in Missed Fists before. This time she was the badly bent nail.

With the win, Amorim also improved to 5-0 with all five of those wins coming by way of first-round finish. Like Piera Rodriguez, Loopy Godinez, and Vanessa Demopoulos before her, expect the Brazilian prospect to get that UFC call soon.

Another championship-winning submission took place in Tijuana, when bantamweight Adrian Luna Martinetti used a gogoplata for Brandon Uruchurtu to submit.

What a way to close out the main event!!!! #UWC31 pic.twitter.com/vZmbWSxnue

JM: Hell yeah. Gogoplatas are dope even if they should functionally never happen in an MMA contest. I will always be grateful to Brad Imes for allowing them to happen.

JM: If you’re old as dirt like me, you may recall that Imes lost to Rashad Evans in the heavyweight finals of Season 3 of The Ultimate Fighter, but what you probably don’t know is that after washing out from the UFC, all 6-foot-7 of “The Hillbilly Heartthrob” secured back-to-back wins by gogoplata. God I love this sport.

AL: Apologies to Gianni Vazquez for burying his knockout win over Devin Miller in Dallas. He might be lucky or he may just be good at it, but he is the proud owner of one the most unique knockouts of the year.

Don’t get hit on the back of your head! Don’t dive right into an elbow.

JM: I’m shocked the mullet didn’t prevent the back of that poor man’s head getting caved in. Oh well, perhaps next time he’ll go with a more protective hairstyle, like a bowl cut.

AL: And now back to the darker corners of the fight sphere.

At Alash Pride 72 (full fights available on YouTube) in Shymkent, Kazakhstan, we find our Humpty Dumpty Fall of the Week courtesy of Rauan Bekbolat.

I don’t know if I’ve ever seen a delay that long outside of the Edson Barboza-Shane Burgos fight. That was a five full seconds before Kenan Shamilli registered that body shot.

JM: I was about to argue that the belly flop drop above was sure to win the Humpty Dumpty but then I saw this clip. Goodness gracious that was something. I’ve seen entire fights take less time than it did for Shamilli’s brain to catch up to his body.

AL: If you want to watch a combat sports variety show, check out Crato Fight Champions 2 free on YouTube from Ceara, Brazil. It featured boxing and kickboxing as well as grappling. We also got to see the beauty of a knee knockout.

I’m not sure what to think about Tiago Mohammed breaking out exact muay Thai in an appearance that was a gentlemanly swangin’ and bangin’.

JM: That was an extremely weird clinch. Everton was seated on his back, so what did he do before that? The best thing I can say for him is that at least he’s not alone. The much more famous Everton regularly gets wrecked by a Mohamed (Salah).

AL: You know it’s always a party in Poland and if you’re looking for the KSW highlights from Warsaw, click on the link here (and you should!).

If you want a sneaky scarf hold submission from Armia Fight Night 12 (free replay available on YouTube) in Gliwice, then see below:

Sweet Finish, however I must take some points from Kolotiuk for using a submission which hid his chest tattoo sponsors.

JM: Scarf hold keylocks are rad. They were a common option for me when I was blue belt. I didn’t like the idea of finishing submissions, so I tried them out all the time. I will always stan them.

AL: It would be criminal to close out this feature without mentioning two of the most amazing highlights from outside of MMA.

At K-1 WORLD GP 2022 JAPAN in Tokyo, Eiki Kurata kicked the ever-loving life out of Eruto.

JM: PROTECT YOURSELF AT ALL TIMES! Holy hell, what the heck was that guy thinking? I know he was getting tuned up a bit but that’s even more reason to keep your damn hands up. That was nasty.

AL: Then there was my favorite combat sports highlight of the week, boxer Jordan Gill surviving an actual DDT and coming back to score a knockout victory.

What an absolute wild sequence of events in Jordan Gill vs. Karim Guerfi

From a DDT to an emphatic KO win. pic.twitter.com/cHOV2OFrDM

JM: Remember when Gray Maynard DDT’d himself unconscious and then tried to argue with Joe Rogan that he was totally fine and and should have won? I guess what I’m saying is, Jordan Gill is cooler than Gray Maynard.

AL: I don’t know if he might have oversold the DDT, but my guess is he wanted to milk it to draw the crowd in and put some heat on Karim Guerfi to really pump up that comeback pop. This is solid, in-ring psychology Jake the Snake would be proud.