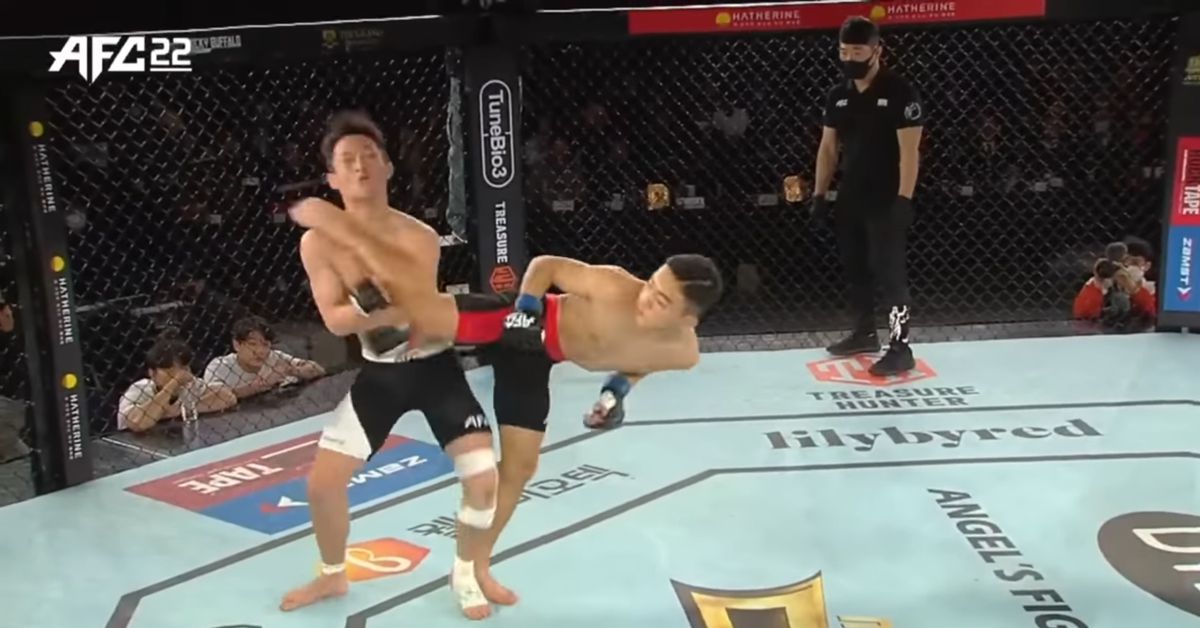 Only in MMA could it be considered a palette cleanser to watch a bunch of videos of fighters getting viciously knocked out, but that’s where I’m at right now after a week filled with some truly screwed-up outside-of-the cage news. This is the life we chose.

Now, a quick glance back at the final few fights of 2022 that didn’t make the deadline for The Fistys, our annual collection of the weirdest and most wonderful moments from the combat sports wilderness. Then we can move on to 2023 with what was supposed to be a clean slate.

Cho Joon Gun is only 16 years old and is annihilating dudes. This from AFC 22 today. #AFC pic.twitter.com/gSuMPZRnqd

According to an on-screen graphic, this was a battle of teenagers as Kim checked in at a relatively senior 19; suffice to say, not the kind of pro contest you’re likely to see in North America. But they build them different out there.

Though Cho is a 125er, and the UFC’s Rosas is currently competing at 135 pounds (with 145 a definite possibility in the future for the 18-year-old), it’s fun to imagine these two crossing paths someday. Kids these days, am I right?

Full fights from Angel’s Fighting Championship are available on YouTube.

This definitely flew under the radar with RIZIN x Bellator also taking place on Saturday, but Cage Warriors closed out a busy 2022 with one more show in London, headlined by former UFC fighter Modestas Bukauskas taking out Chuck Campbell.

Bukauskas came into the UFC with plenty of hype before running into stiff competition (Jimmy Crute, Michal Oleksiejczuk, and Khalil Rountree. Ouch) but there’s still potentially plenty of great fights ahead for the Lithuanian light heavyweight who doesn’t turn 29 until February. It’s a great start to becoming a Cage Warriors champion by winning a vacant title.

Also, I know this happened at the very end of 2022, but I’m considering this highlight to be an early candidate for the 2023 Humpty Dumpty Fall of the Year award. Cool? Cool.

Bukauskas’ main event win might not have even been the most notable title triumph of the evening as another vacant belt was on the line between flyweights Shajidul Haque and Sam Creasey.

Haque got his start with Cage Warriors in 2013 and bounced around in some other promotions since that first run. He scored a third-round knockout in his promotion return and was able to pass Creasey.

He just completely froze Creasey with a loud right hand, a finish made even more impressive by the fact that Creasey had just hurt Haque moments earlier. That’s five straight wins for Haque now and it won’t be long before other promotions are calling for his services again.

In non-title action Tobias Harila may have outperformed Bukauskas or Haque with his lightning fast elbow finish.

Would probably have led this feature, if Harila had been able to walk it off. But Damon Wilson seemed to be woken by the ground which meant that he needed to take some more punches, before Marc Goddard waived it off.

Cage Warriors 148 is available for replay on UFC Fight Pass.

Over in Lagos, Nigeria, Cherif Drame ended Face Off Fight Night 3 in brutal fashion with an overhand right that had Segun Ogunnoki floating.

Holy hell. Massive KO by Cherif Drame in the Face Off Fight Night 3 main event. He was thrown off his feet. pic.twitter.com/SriG3G5gMn

According to Pulse Nigeria, Ogunnoki was favored to put on a show in his home country, but for now it’s back to the drawing board.

The same can be said about Nigeria’s Emmanuel Bernard, who was also a victim of the Democratic Republic of the Congo’s Josias Mukasa.

Bernard may not have been out in, but it’s still a great stoppage. The man could be clearly seen to have jelly legs.

And look! Kamaru Usman was right there! You can take what you like from his hand.

Kamaru Usman addressed the crowd after at Face Off FN.

Kamaru Usman addressed the crowd after Face Off FN. pic.twitter.com/K4t5SndtwL

Here’s one that got lost in the shuffle a couple of weeks ago, Dorde Bukvic removing a head at Fight Night Championship 9 in Sisak, Croatia.

Unlike the Harila knockout that Jakob Kosic experienced, Jakob Kosic wasn’t woken by the canvas. The canvas actually made him go. It’s hard to see.

Lastly, at Oktagon 38 (not to be confused with Octagon League 38 obviously, which took place a few weeks ago) in Prague, Czech Republic, former Cage Warriors and Bellator fighter Alex Lohore got back in the win column with an awesome right hand.

Lohore fell short of winning the Oktagon middleweight title this past September where he was knocked out by Patrik Kincl, but back down at 170 pounds, he could be challenging for gold again sooner rather than later.

If you’re interested in the entire fight, Oktagon MMA has you covered :

If you know of a recent fight or event that you think may have been overlooked, or a promotion that could use some attention, please let us know on Twitter — @AlexanderKLee — using the hashtag #MissedFists.