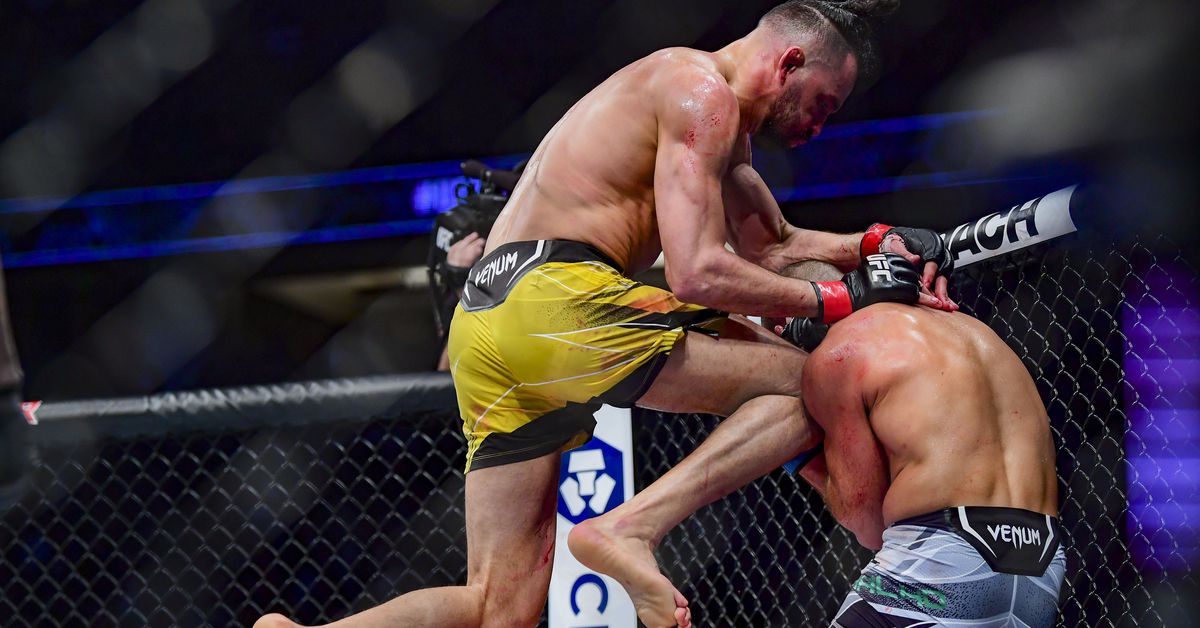 Khamzat Chimaev is expected to face Gilbert Burns in the biggest fight of his career at UFC 273 on April 9, and fellow UFC welterweight Michel Pereira believes the world will meet the “real” Chimaev that night in Jacksonville, Fla.

Speaking on this week’s edition of MMA Fighting’s Portuguese-language podcast Trocacao Franca, Pereira discussed the hype around the Chechen fighter, who has won four in a row under the UFC banner. Chimaev has steamrolled every single one of his opponents in one-sided clashes since July 2020, and opened as a 3-to-1 favorite against Burns.

“I don’t think he’s this monster people have created,” Pereira said. “We’ll see the real Chimaev in the ‘Durinho’ fight. This is when we will see the true Chimaev. Fighters can see a bit more than us fighters. He might surprise, but he’s not [that better] than Durinho. Chimaev has shown great potential, but not yet against top competitors. I wanna see if he’s that man against Durinho. But I don’t see all that danger people talk about.”

Chimaev, who is 10-0 as a professional, debuted in the UFC against John Phillips, winning via second-round submission. He re-entered the octagon 10 days later and destroyed Rhys McKee in under four minutes. Chimaev was back in action less than a month after that, stopping Gerald Meerschaert in just 17 seconds. After a year-long break due to a bout of COVID-19, the Chechen welterweight walked through Li Jingliang in Abu Dhabi for another stoppage victory.

Burns, a jiu-jitsu specialist who has developed into a well-rounded MMA fighter, made his way towards 170-pound gold with big wins over the likes of Tyron Woodley, Demian Maia and Gunnar Nelson, but came up short against UFC king Kamaru Usman. Durinho won a decision over Stephen Thompson in July.

“[Chimaev] has great wrestling, of course,” Pereira said. “But I don’t think his striking is that big of a deal. He used to fight guys, and he went crazy…I fight for entertainment. To put on a show that the fans will enjoy. To go to a fight and have it end in less than a minute is not something I like. It may happen, it is cool. But it’s not my [thing].. I like to go to the second and third rounds. But I don’t think Chimaev is this monster. No. All day, every day, when [they] want [me to fight him], I’m in.”

“He is good but won’t do [the same thing to Burns],”, he said. He continued, “The truth is that he is a great wrestler, he trained wrestling since he was a child, and wrestling is one the most powerful weapons [in MMA].. It’s not a problem if the man is good at wrestling. However, I doubt it… Let me give you an example: Khabib’s cousin [Islam Makhachev]. Although they have amazing wrestling skills, their ability to box on the feet is not enough for them. Although they might be able to get knockouts because of the fight aspect, it isn’t a great match. They are fucking great in wrestling, and everybody fighting them knows that. You have to respect them.”

Pereira has won his past four in the UFC with decisions over Andre Fialho, Niko Price and Khaos Williams, plus a submission against Zelim Imadaev. Throughout his 40-fight career dating back to 2011, Pereira has knocked out 10 opponents and tapped seven, and has “plenty of confidence” in his wrestling against Chimaev or any other top-ranked wrestler.

” I have [seven] UFC fights and was not knocked down once,” said he. “Sure, I haven’t fought a pure wrestler, but people have tried to take me down. Niko is a difficult matchup, he has long arms. It was a good defense. However, you cannot take Niko off of your legs. He has long arms. The thing is, I’m much stronger. Every single person I have fought in the UFC was the strongest. That is my advantage.

“Brother, you might have great wrestling all you want, but when you shoot at my strong legs with good [takedown] defense, it feels like you’re shooting at a post. My friend, it’s all over with wrestling. It’s like Khabib’s cousin. They are way too strong, brother. And when they put their hands on these chickens, these poor little guys, they will [beat them].”