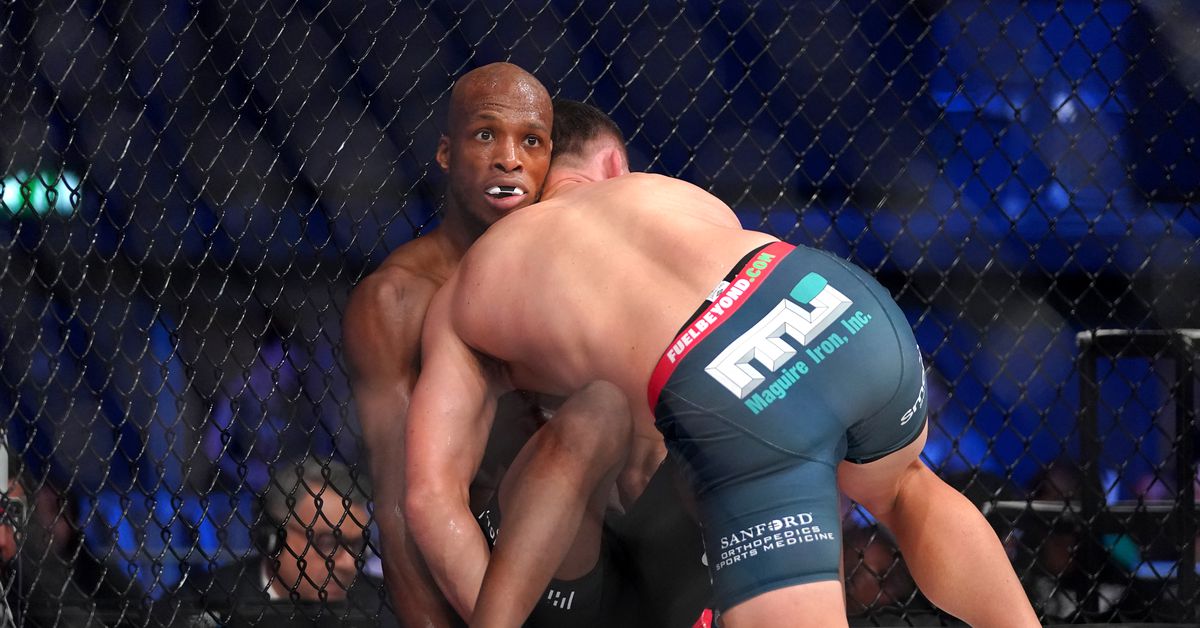 Michael Page — like most who watched on Friday — wasn’t thrilled with the main event of Bellator 281 when he fought Logan Storley for the interim welterweight title. In the end, Page hopes the disappointing nature of the 25-minute contest could lead to some rule changes, especially when it comes to wrestling.

Page lost a split decision to Storley in his first attempt at capturing gold. “MVP” was taken down over and over throughout the fight, however, Storley wasn’t making attempts to improve his position, or land any damage, while Page was doing much more in that department. On Monday, Page opened up about the loss, and how annoying it was while it was happening.

“In the moment, it felt very frustrating because of how he won,” Page said on The MMA Hour. “I’m not debating whether he won or not, I haven’t watched it back yet, but a lot of people have told me since that they think I won the fight, but for me I like to put more blame on myself. I didn’t do enough, I didn’t work hard enough to not prevent him from holding me down in those positions. But he was holding me in survival mode, more, ‘I’m just trying to make it to the end of the fight,’ versus, ‘I’m trying to beat him,’ which is why I genuinely feel the rules need to be looked at because there’s a bit of a loophole. It happened a week before in France with [Ryan] Bader, and he definitely won [against Cheick Kongo], but I definitely feel like you should be more encouraged to do a lot more when you’re on the floor.

“Wrestling shouldn’t be a tool to stall, it should be a tool to advance, to create submissions, or create damage, or ground and pound.”

Following the fifth round, Page felt in the moment like he might not have been victorious — a feeling that has since been replaced because he has had so much support, plus, he says he has not had any lingering effects from the fight at all.

“I’m going to be completely honest, based on the current ruleset that is in play, I assumed I would’ve lost,” Page said. “After Round 4, I’m having a casual conversation in the corner, and he told me, ‘I think you’re down, you need to go for the Hail Mary, try to knock him out,’ which is why I didn’t play it as tactical. If I was more tactical like I was in Round 4, just stayed away… but that’s just not my style. I want to try and go in and win, and win big.

“In retrospect, afterwards, I was like, ‘Yeah, he didn’t actually do anything.’ I’m being dead serious when I say I have not one bruise, not one sore, not one injury, nothing at all is lingering from that fight. I definitely don’t feel like I’ve had a five-round championship fight because he didn’t come to inflict damage. He came to survive.”

Storley improved his record to 14-1 with the interim championship victory, while Page loses his second pro fight in 22 appearances. Storley will likely face current champion Yaroslav Amosov to unify the titles, but the timeline is known since the latter is currently fighting for his home country Ukraine against the Russian invasion.

Following the London event, Bellator president Scott Coker was uncharacteristically outspoken about two judges scoring the fight for Storley, and the performance of his new interim champion in general.

“You’re not doing any damage. You’re not getting closer to a submission. You’re not creating any threat. You’re just laying on somebody — and to me, that’s not MMA,” Coker said at the Bellator 281 post-fight press conference after telling media members he felt Page won the fight.

“Control is one thing, but you can’t control somebody and just think that you’re going to win the fight. To me, it’s like, there’s certain things that have to happen, and wrestling alone is not going to be enough.”

For Page, he just wants his fights to be entertaining for the fans. Ultimately, he blames himself for the loss, but if some of the wrestling stalling rules were to change, he certainly wouldn’t be upset about that.

“There’s been multiple sports where they upgrade themselves, they upgrade the ruleset to adjust to the times because I feel like wrestling has been used in a negative way,” Page explained. “Back in the day people came to fight, not to survive.

“[But Scott] said it to me afterwards [that he thought I won], and I thought maybe he was trying to make me feel better, but then he said it in the interview — then I saw a lot of people make comments about it [saying I won] — and I began to second guess myself, maybe I should look at it again properly. But everyone that’s rewatched it all said, ‘Yeah, you won that fight.’

“Ultimately, it’s on me, but the best thing about this is I just need to fix that one thing. If I correct that one aspect in my game, I become the most lethal MMA fighter in the world, 100-percent.”