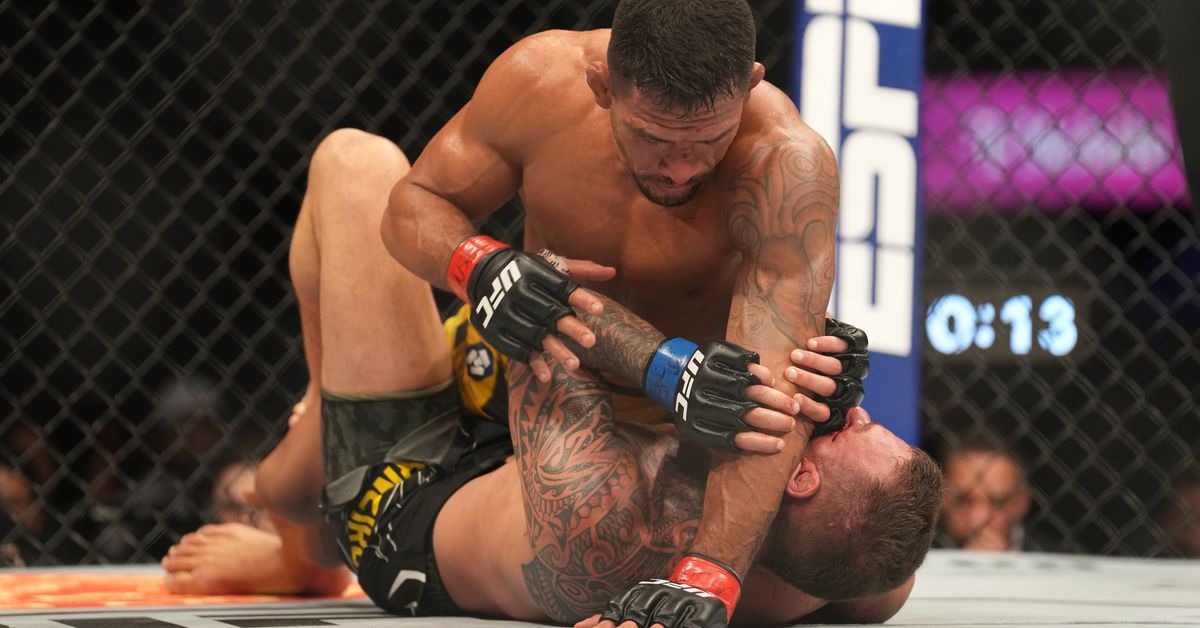 This past weekend, Rafael dos Anjos put a vicious beating on Renato Moicano in the co-main event of UFC 272. Moicano, who accepted the fight on just four days’ notice, was repeatedly taken down and mauled on the ground for the better part of 25 minutes, to the point where the UFC’s commentary team suggested that his corner should stop the fight.

In the aftermath, much has been made of the decision to allow the fight to continue, with some suggesting that the fact that Moicano staged a small comeback in the fifth round is proof that his coaches had it right all along. However, UFC Hall of Famer Michael Bisping is sticking to his guns.

Bisping was at the UFC 272, commentary booth, where he argued strongly that Moicano was doing their fighter an injustice by continuing the fight. A few days removed from the event, he maintains that they should have thrown in the towel.

“It does [make me uncomfortable],” Bisping said Wednesday on The MMA Hour. “I would never want my words to be taken to mean that Moicano is insulting. I have tremendous respect for what he did and what he went through — to step up to the plate on Tuesday and take on dos Anjos for five rounds at a catchweight is an incredible feat of bravery in itself. But the reality is, after three rounds, he was not gonna win that fight. He was unable to win the decision. It’s just how it works.”

Moicano was certainly beaten. Dos Anjos admitted that he deliberately “took his foot of the gas” during the fifth round, as he was already so ahead. But despite the severity of the beatdown, Moicano was complimentary of referee Marc Goddard for allowing the fight to continue, saying earlier this week that, “otherwise, I would not know what I’m made of.”

“In mixed Martial Arts, for whatever reasons, we just don’t see it,” Bisping stated. “I know Jason Parillo threw the towel in when B.J. Penn defeated Georges St-Pierre the second time. It’s rare that I know of any other instances where this happens. … It’s not uncommon in boxing. It happens a lot. It’s something that I believe a lot of coaches [in MMA] should do. You’re looking after your fighter. I think what it is, a lot of coaches attach their ego to the fighter, because they go through it together. The coach wants them to win. If the fighter loses, it’s because the coach is losing

In the end, the coach’s job is to protect the health and safety of their fighter — and while that can be made more difficult in a sport structured around win bonuses, Bisping argues that by failing to protect their fighters, coaches are jeopardizing not just a fighter’s health, but also their long-term career prospects

“Sometimes you’ve got to say, ‘You know what, today’s not our day. “You’re gonna lose, and I want to see you have a long, productive career,” Bisping stated. “It’s one thing to get caught. When you are caught in a round of shots and knocked unconscious, fighters can convince themselves that they have been caught.

We all get caught from time to time.

“But to get systematically beaten down for five rounds to where commentators say this needs to be stopped, there’s psychological trauma there. This is going to impact your confidence and could lead to you never feeling the same. So right then and there, if they’re stopping that fight, they are saving the fighter’s career.

“So what, you lose some here and there. Go home, feel sorry for yourself, heal up, and get back in the saddle. Doing that [not stopping the fight], you never know, there could be lifelong injuries.”