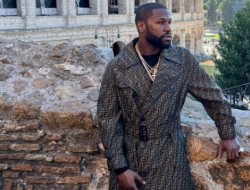 Boxing legend from the USA, 45-year-old Floyd Mayweather Jr., as promised, announced the next fight with his participation. According to the tradition that has already developed in recent years – exhibition.

On his social networks, Floyd announced that on February 25 in London at the O2 Arena he would fight with British Muay Thai fighter Liam Harrison. He posted a poster and announced the imminent start of ticket sales.

However, a few hours after the announcement, Harrison also got in touch and, with undisguised regret, announced that he would not be able to enter the ring due to a knee injury.

According to the fighter, negotiations for a fight with Mayweather began a few days ago, and Liam hoped that he would be able to take part in a boxing fight, despite the injury. But already after the first sparring, the knee was very swollen, after which it became clear that nothing would burn out without the planned operation.

It is noteworthy that Harrison also announced the absence of a contract for the fight. At the same time, he timidly hopes that he will still be able to fight with Mayweather after recovery. But it will be clearly later than February 25th.

The other day Mike Tyson ran into Floyd Mayweather: “I don’t want to hear this anymore!”