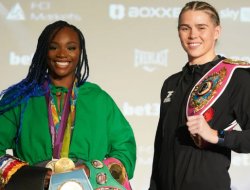 On October 15 in London (England) a boxing evening will be held, the main event of which will be a duel for the title of absolute middleweight champion (up to 72.6 kg) between American Clarissa Shields (12-0, 2 KOs), who owns WBC titles / WBA / IBF, and British Savannah Marshall (12-0, 10 KOs), who owns the WBO title.

Today, the official weigh-in of the participants of the show took place.

Shields and Marshall showed the same weight on the scales – 72.3 kg.

In the second most important event, WBO and IBF world champion in the second featherweight (up to 59 kg) Mikaela Mayer (17-0, 5 KOs) will meet in a unification bout with compatriot Alicia Baumgardner (12-1, 7 KOs), who owns WBC and IBO titles.

They also have parity on the scales – according to 58.6 kg.