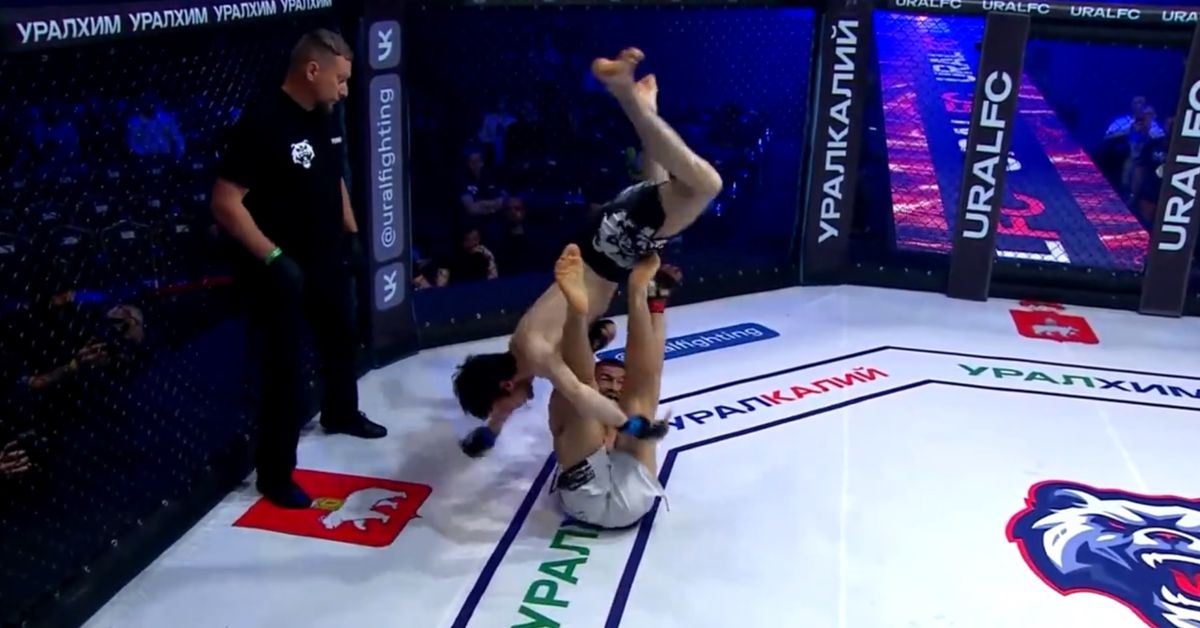 We reward creativity here at Missed Fists Headquarters. Whether its fighters making creative use of the cage or ring or moat, attempting submission holds that make no logical sense, or doing whatever the hell it is that this gentleman was doing, we can’t stress enough that how you attempt to win is just as important as winning itself.

This policy could be subject to some modifications for safety.

(Big thanks as always to @Barrelelapierna for their weekly lists of the best KOs and submissions, and to @Grabaka_Hitman for uploading many of the clips you see here. If you have the time, give them a like and join Twitter . )

Mansur Beltoev clearly wanted to make a splash in his pro MMA debut and, well, it’s definitely not one that he or anyone else will forget anytime soon.

Cartwheel guard passes are a dicey proposition at best and this one was not only well-defended, but Beltoev made the cardinal sin of posting up on his arm after going airborne. The end result was disastrous for him as you can see. Bless his heart for going for it, but sometimes you’ve got to just dive down into that guard and go to work.

We congratulate Aziz Mukhtarov for his win.

Dmitriy Ionin had a much more successful pro debut, blasting Valeriy Dashkevich with a slick 1-2 combo to earn his first win.

Ural Fighting Championship 1, which took place in Perm, Russia, is available to stream for free on YouTube.

While we are in Russia let’s head over to Derbent and enjoy a fashionable spin kick from the AFC International League’s weekend.

That’s Bakhachali Bakhachaliev with what can only be described as a spin kick staredown knockout. That’s something you don’t see every day. Then again, when you ping-pong your opponent off the cage with a hit like that, you’re probably feeling confident that they’re not getting back up.

This wasn’t the most effective body kick of the week.

Yeah, that was worse. Much, much worse.

The sound of Geraldo Neto’s liver kick is enough to startle even the most ardent fighter fanatic. But then, you look at Luis Henrique Quintella on the mat. It seems that he has been there for a long time. His body (what’s left of his body, anyway) language communicates one thing: regret.

It’s these finishes that leave you wondering if fighting sports were a mistake.

Iron Man MMA 24 from Para, Brazil, is available for free replay on YouTube.

Let’s not forget the good times with some action at a Circuito Argentino de MMA in Buenos Aires.

Wow. Slam and GNP KO by Gabriela Campo against Cecilia Lujan to kick off the CAM 11 main card #CAM11 pic.twitter.com/Vxg8ANYOPZ

My guess is that there was some forehead-to-chin contact there, which is what really did the damage, but it’s hard to tell from these angles. Either way, that’s a fierce finish.

Diego Robledo displayed his wild aggression on that card with a flying kick that hit right at the button.

Savage flying knee KO by Diego Robledo at CAM 11. Damn. Cristian Dominguez was down for a long time but left the cage on his feet. #CAM11 pic.twitter.com/GBnE6YLkKl

I don’t know how much of that is luck and how much is skill because Robledo made an incredible adjustment mid-strike to catch the chin of a retreating Cristian Dominguez. On the other hand, you have to be good to be lucky and lucky to be good, so full credit to Robledo, who captured a middleweight tournament crown with the win.

At Matrix Fight Night 9 in New Delhi, Jojo Rajkumari landed a punch that made her opponent go full Matua.

These will not cease to be frightening.

Got 30 seconds to spare? Then watch this unbelievable fight between Tai Zhicheng and Zhou Xiaofei from a Jue Cheng King event that is available to watch on UFC Fight Pass.

Roller coaster 27 second fight between Zhicheng Tai and Xiaofei Zhou this morning at JCK. Zhicheng has a great hook. pic.twitter.com/H87ph1HKie

Zhou had Tai completely turned around and it looked like the fight was in the bag before Tai uncorked a ridiculous bomb with his back against the cage. You can see it again. This is not a blind throw. Tai gathered himself, squared his opponent up, and threw with accuracy, all in the span of about three quarters of a second.

As crazy as that was, make sure you read about Aerdake Apaer’s perfectly timed spin kick KO, which is sure to end up on countless Knockout of the Year lists.

Just to remind you that there are levels to this, let’s end this feature with a visit to Amsterdam for Levels Fight League 5 (available via PPV replay).

Liam Etebar needed just 10 seconds to run through Tayron Chavarro and improve to 8-1.

@badboyetebar with a huge win on his LFL debut!!

That’s three straight KO victories for Etebar and they came in at 10 seconds, 16 seconds, and 68 seconds. Those opponents had a combined record of 2-2, but still!

Ammari Deidrick wins this week’s Reach Out and Touch Someone award after landing a head kick from the longest distance possible.

Mohamed Ghalab was inches away from safety, but on this day he ate just enough foot to seal his fate.

On the other hand, Alain van der Merckt got all of this right hand to clobber Milan Simonovic.

And in the main fight, UFC former middleweight Tom Breese continued to have success after parting ways. He successfully defended his LFL title by submitting Ahmed Sami.

Breese could never quite get his health on track during his time with the UFC, so it’s good to see him finding some traction on the international scene. Just 30 years old, I’d expect to see Breese competing for a North American promotion again before it’s all said and done.

This is it for this week folks. Any fight you are able to walk away with is good.

If you know of a recent fight or event that you think may have been overlooked, or a promotion that could use some attention, please let us know on Twitter – @AlexanderKLee – using the hashtag #MissedFists.