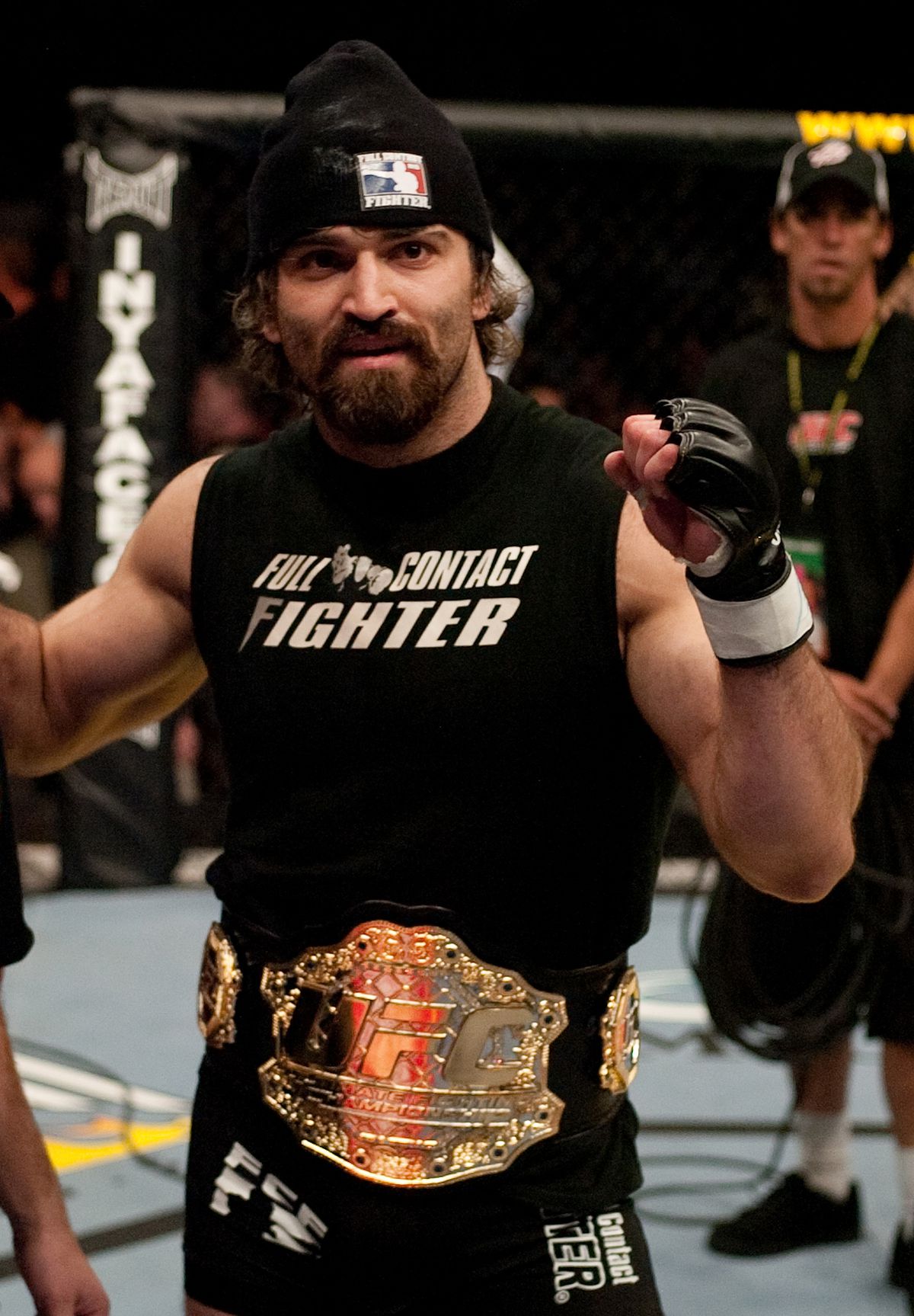 Making the Case is a new recurring series where we take a fringe or unorthodox take and make the argument for why you should jump on board. The goal here is not to definitively prove why X is true, but to create discussions that haven’t been had before, and hopefully in so doing, call into question some underlying assumptions in the MMA conscious. And maybe, just maybe, we might get at some deeper truths along the way.

Though it’s far from unanimous, most people seem to agree that Stipe Miocic holds the crown as the greatest UFC heavyweight of all-time.

A two-time UFC heavyweight champion, Miocic holds the record for most UFC heavyweight title defenses (along with some other records) and was a dominant force atop the division for the last four years. Those who don’t consider Miocic to be the top dog tend to lean towards Cain Velasquez or Randy Couture as the true UFC heavyweight GOAT for various reasons. Hell, you might even find some people who argue for Francis Ngannou already.

But what if all those people are wrong? What if the greatest heavyweight who has ever fought in the UFC is someone else entirely? What if it’s actually a man who only briefly held the title, and that was 15 years ago?

What if Andrei Arlovski is the greatest heavyweight the UFC has ever seen?

Arguments about the Greatest of All-Time are inherently fraught with peril. Greatness is extremely subjective, and even quantitative metrics like accomplishments are limited by context and opinion. How much is a win worth to a legacy? How much does a loss hurt? Are titles more important than any other metric, and if so, by how much? Do we consider a fighters entire career or only their peak years? It’s all a quagmire of personal opinions trying to find common ground, and the broader consensus seems to be that in terms of GOAT legacies, titles and title reigns are the benchmark by which we measure.

But are we certain that’s the best way to assess every weight class? Should we really put heavyweight and flyweight in the same box? Perhaps, in certain circumstances, we should broaden our scope a bit.

Consider this: Heavyweight is the longest tenured division in the UFC, dating back to 1997, and in the 25 years since its inception, the division has seen 17 different undisputed champions across 22 title reigns, plus six interim champions. The longest continuous title reign was Cain Velasquez’s 896 days as champion (his second reign), with Stipe Miocic coming in second at 785 (just 78 days more than Brock Lesnar). On a similar note, the most consecutive title defenses is three, held by Stipe Miocic, and five different champions share second place with two title defenses. When the heavyweight title is changing hands roughly once a year, and as a result no one is stringing together more than a few wins, there’s a strong case to be made that no heavyweight champion has demonstrated obvious greatness beyond his peers.

But you know who has undeniably set himself apart from his peers, and done so in some extremely relevant categories? Andrei Arlovski.

For Andrei Arlovski to be still be picking up relevant wins in the UFC, 22 years after his first, that’s a miracle. That’s never been done before, and frankly, we may never see it again.

Arlovski has competed in the UFC 37 times, tied for second overall among all weight classes. That’s 10 more fights than the next best heavyweight, Frank Mir. Arlovski also holds the UFC record for heavyweight wins with 22, tied for third all-time among all weight classes behind Donald Cerrone and Jim Miller, and five more than the next closest heavyweight, Derrick Lewis. He also holds the records for heavyweight fight time at 5:54:58 — 11th all-time and nearly two hours more than second place, Junior dos Santos at 4:07:01 — and significant strikes — 1336, 227 more than dos Santos — and he’s at or near the top of a dozen other statistical categories. Not to mention that he almost certainly has made more money than any other heavyweight in the UFC. Plus, Arlovski is still picking up Ws!

Earlier this month at UFC 271, at the age of 43, Arlovski won his third fight in a row, outworking Jared Vanderaa to take home a decision. Winning in MMA is unbelievably difficult. Winning after you’ve lost your fastball is even more difficult. And regardless of how you feel about the organization, the fact remains that winning in the UFC means something. Competing in the UFC means a fighter has a baseline level of competence (with special exceptions being made for the CM Punks of the world). So for Andrei Arlovski to be still be picking up relevant wins in the UFC, 22 years after he got his first win in the UFC, that’s a goddamn miracle! That’s never been done before, and frankly, we may never see it again.

In terms of longevity, especially in the UFC, Andrei Arlovski is one of one — and at some point, longevity has to come into play when considering legacy.

What’s better: One big bottle rocket or 500 cherry bombs? It’s hard to say, they’re so very different, and Arlovski’s career is much the same. The heights are undoubtedly lower than those of other great heavyweights, but his career is not without its own peaks — the man was a UFC champion after all, with a pair of title defenses to his name (he’s in that group tied for second-most title defenses all-time) — and his range is unsurpassed.

In terms of longevity, especially in the UFC, Andrei Arlovski is one of one — and at some point, longevity has to come into play when considering legacy.

Arlovski has competed at the top of the sport for well over two decades, and while the contemporaries he began with are all either retired or fighting other elder statesmen of the sport in bouts of nostalgia porn, Arlovski is still gutting out wins over up-and-comers 12 years his junior. Over his last five fights, Arlovski has faced only one man in his 30s, Chase Sherman who was 31 when they fought. The rest of Arlovski’s opponents during that stretch were hungry 20-somethings looking to make a name off a former UFC champion well-past his prime — and only one of them was able to do so.

And then there’s the other stuff. The things that are even more difficult to quantify. Like the fact that even though “Pitbull” is one of the most widely adopted nicknames in the sport, there’s one man you think of first when you hear it, and it’s not even the two fighters who are literally marketed as “The Pitbull Brothers.” Or the fact that Arlovski is probably the only fighter in history who has managed to rebound from three different losing streaks of four or more fights. Four-fight losing streaks are a death sentence to a career, and almost ALWAYS mean a fighter has fallen off the cliff and is soon to retire. But not Arlovski. He just kept trucking, kept putting in the work, and righted the ship. Entirely without hyperbole, it’s one of the most impressive things that’s ever happened in MMA that nobody talks about. The mental fortitude it requires is off the charts. Those sorts of things undeniably reveal some sort of greatness, but do they ultimately matter? I don’t know.

Here’s what I do know: For the last 22 years, Andrei Arlovski has done as much or more than any other heavyweight ever. He has fought and won more than any other heavyweight in the history of the UFC — by a lot — and he has done so over three generations, fighting just about every heavyweight that has ever mattered. He has held titles and lost them. He has delivered some of the most iconic moments in the history of the sport and he has failed spectacularly on some of the grandest stages. For my entire adult life, he has competed, sacrificing his blood, body, and brain cells, and somehow, impossibly, he’s still doing it.

As MMA continues to grow, we will see many more champions put together dominant runs, holding the title for a year or two before dropping off and moving on. But we are never going to see another Andrei Arlovski. And that’s why he’s the GOAT.