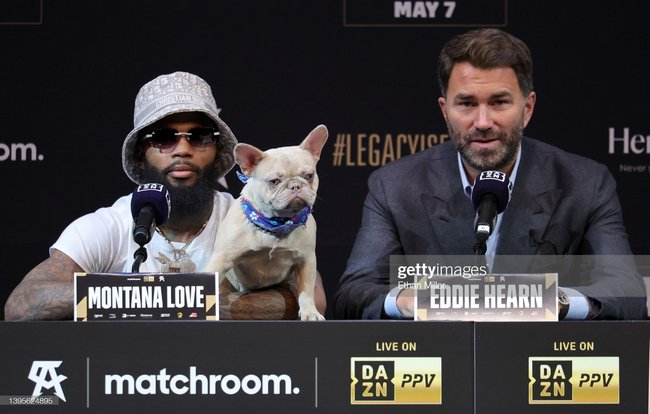 T Mobile Arena, Las Vegas, USA. American top super lightweight prospect (up to 63.5 kg) Montana Love (18-0-1, 9 KOs) entered the ring with rapper and dog Papi (and the dog was taken out by the singer), and then in an unexpectedly unwatchable duel he defeated the gatekeeper from Mexico Gabriel Valenzuela (25-3-1, 15 KOs). The IBF North American title was at stake.

The long-armed Valenzuela fought a southpaw for the first time. Love effortlessly failed his opponent and countered, and in the last seconds of the round he also recorded a knockdown as an asset – he countered with a short right hook, after which the Mexican lost his balance and fell.

In the 2nd three-minute period, the underdog won back two points – he unexpectedly dropped Love with a left hook. Then both staged a tactical skirmish, and strove to work as the second number. The American acted traditionally sparingly. Fans are unhappy: they yawn, they kill time on their phones. Terrible fight for the second PPV card event.

Starting from the 3rd round, the fight turned into a sparring. Valenzuela was a little more active, and Love was a little more precise. Both woke up only 30 seconds before the final gong, made a small fight. This is where it all ended. One of the scariest fights of the year.

The score of the judges: three times 114-112 in favor of the favorite. Patients are unhappy. But, most likely, not a verdict, but a performance.