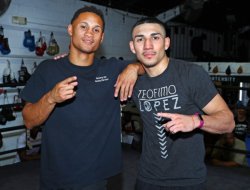 Now he has to make two mandatory defenses in a row – to meet former world champions compatriots Jose Ramirez (27-1, 17 KOs) and Teofimo Lopez (18-1, 13 KOs). The first one has already refused the fight – he does not agree with the distribution of the prize fund (65/35 in favor of the champion). Lopez verbally confirmed his desire to fight for the title, but the level of performance in the new weight is not yet impressive.

Challenger promoter Bob Arum commented on the situation (Top Rank): “The Prograis fight is an option for Lopez. But not the only one. He has other options as well. And one of them is to fight one more fight, adapt to the division, and then face Devin Haney if he beats Vasyl Lomachenko.”

Haney is the undisputed lightweight champion who will soon (most likely immediately after the fight with Lomachenko) rise above. Arum invites Devin and Teofimo to “fight in a non-title fight. It’s a big fight (and without belts).

Recently, a top coach assessed Lopez’s chances to take the title from Prograis. But Haney is worried that “Something happened to Teofimo – Prograis and Ramirez will beat him.” A little earlier, Lopez’s father said that his son would fight Prograis and even named the dates.