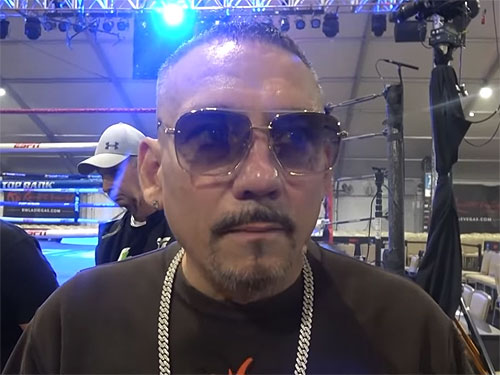 “Your son is moving to a higher category. What does this mean for the lightweight division? Who are your top 3? Who is your number one, number two, number three?

— Lomachenko. Lomachenko. Lomachenko is number one right now. Lomachenko. And no one wants to fight him. Nobody calls him. With whom did he have an extreme fight? With Commi? It was an excellent performance. With Nakatani, he fought much better than we did. But Lomachenko hasn’t fought in a long time. The best opportunity to fight him is right now. He dropped out of boxing for a long time. He is in Ukraine, fighting for his land. I respect him for that. He is a great person. And I’m telling you right now – no one can beat him at 61.2 kg! Especially with these corners. It took me 2 months to figure this out. He had 400 amateur fights. Can you imagine how many coaches have tried to beat this style? And no one has been successful. And I did it. Salido didn’t do shit. Salido fought dirty.

Yes, he hit him below the belt.

– You can not take this fight into account. We were the only ones who beat Lomachenko. One of the judges counted 11 rounds to one, the others 10-2, 9-3. It was a takeaway. We called it “freezing”. Even though he had many sparring partners, he didn’t know what to do. Even Lomachenko himself said that I studied him really well. Nobody else could do it. Everyone tried to figure out Lomachenko, but I was the only one who did it.

– Okay, Lomachenko is number one, who is number two and number three?

– I have a Tank – number two. The third I see is Haney. Because Haney has a great jab. I can’t take it away from him. He has a great jab, but I don’t like his style. He’s not spectacular, and everyone knows it. You see that no one is talking about Haney and Kambosos. Nobody talks about them.

Lopez challenged Davis: “Get up to me, light weight is already dead”