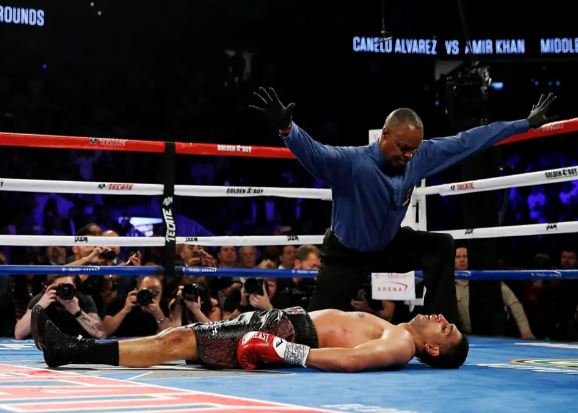 Silver medalist in 2016 OI-2004 and ex-world champion British techie Amir Khan (34-6, 21 KOs) moved up two weight categories and tried to take the WBC middleweight belt from Mexican Saul Canelo Alvarez (57-1-2, 39 KOs), but was brutally knocked out in the 6th round.

Already today, the reigning undisputed super middleweight champion Canelo will try to take away the WBA Super belt from Russian light heavyweight Dmitry Bivol – read our preview and forecast, watch the fight online together with us.

Before the fight
Khan told, what is the secret of the unreal strike power of the Mexican: “… including the choice of gloves. They are all completely different. When I boxed with him, he chose horsehair. When I tried to box in them, I felt uncomfortable – as if I was kicking my bare fists against the wall. It is very easy to hurt your hands in these. But they are, of course, more rigid. They feel like you’ve been hit with a baseball bat.”

“The difference is that if there is foam and horsehair, then these gloves sit a little differently on the hand. The padding seems to flow down the sides and back, making your knuckles almost visible. That is, it is almost like a blow with a bare fist. Not everyone can use these gloves. After all, many fighters simply do not have such hard hands. For example, I would have definitely earned a fracture. But there are also fighters who can punch through walls with their bare fists,” says Khan.

The Briton explained that the choice of gloves also significantly affects the tactics for the fight, since the opponent’s intention is easy to “read” – he will try to outbox or aim for a knockout: “By choosing gloves, you already understand what type of fight the opponent is aiming for, what his plan for the fight is . Especially if your opponent is not a very puncher, but puts on “knockout gloves”, then it is already clear that he will try to knock you out. This means that you need to box more carefully and more carefully. Canelo’s gloves are almost empty. I understood that he was looking for an opportunity to deliver one single blow to the target.

Earlier, Amir Khan and his wife raised money for the needs of Ukrainian refugees. And then they were robbed at gunpoint, a video of the robbery appeared a little later.