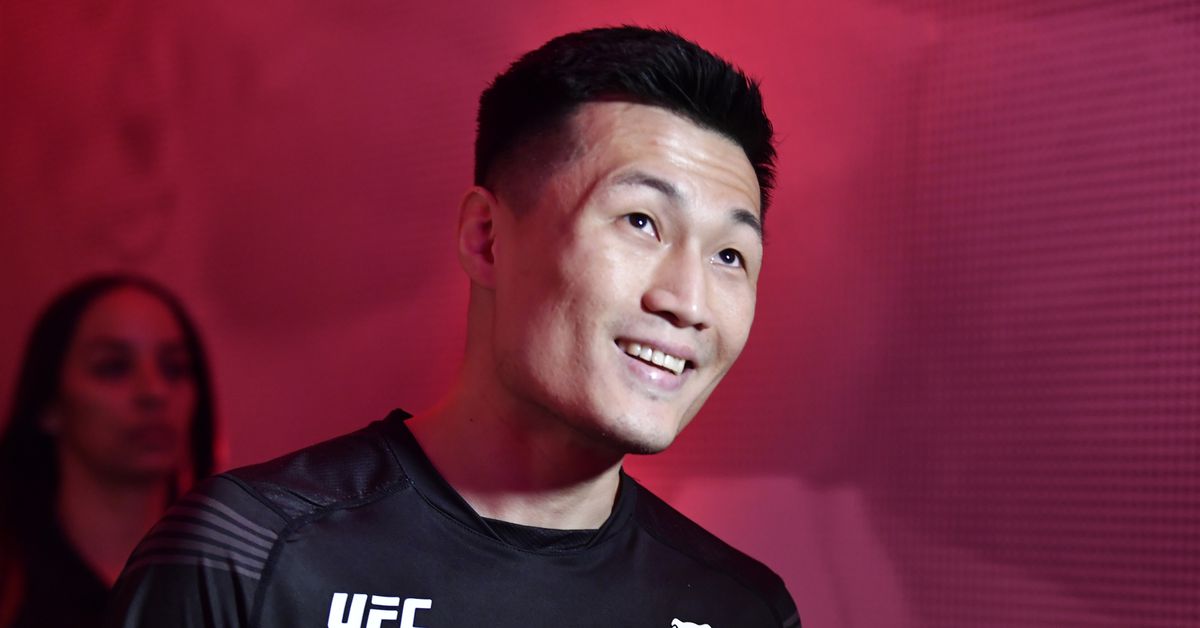 Nine years have passed since Chan Sung Jung stepped in as a late replacement to challenge Jose Aldo for the featherweight title at UFC 163.

While that first crack at gold may not have gone his way, after nearly a decade “The Korean Zombie” is finally getting his shot at redemption. Jung is once again slated to vie for the UFC featherweight strap as a replacement opponent when he meets Alexander Volkanovski on April 9 at UFC 273 — an opportunity that fell into his lap once Volkanovski’s original challenger, Max Holloway, withdrew with an injury. And with the grind it took to work his way back to this point, Jung is determined to make the most of his second chance.

“When he fought Aldo, he wasn’t actually ready at that time,” Jung’s head coach Eddie Cha said while translating for the featherweight on Monday’s episode of The MMA Hour.

“He stated nine years ago that nobody could beat Jose Aldo. Nobody even thought about beating him, nobody entertained that [idea]. He’s happy that he got to fight him because now he can actually win the title shot.

“He’s always believed that someday he’d get another title shot,” the duo added. He said, “It has always been my dream to win another title and be a champion.” He just kept going. He wasn’t sure if he was ever going to get this opportunity again, but he worked his butt off, and the persistence and the hard work — and here we are today, April 9th.”

MMA is ultimately a sport about timing, and for Jung (17-6), the timing of UFC 273 couldn’t have been more perfect. As soon as Holloway withdrew his name from the title picture, seemingly every featherweight in the UFC’s top 10 rushed to volunteer their services, with some doing so more more aggressively than others. Jung was more reserved. Jung was fresh from a huge win over Dan Ige in June , his third victory from his previous four fights. He felt confident that he would get the UFC call.

“He did not campaign as he thought he was next in line,” Cha stated in translation of Jung. “Out of the top five guys, he’s the only one coming off a win, and so he was somewhat expecting it, but he was also surprised when he did get it.

“He didn’t seem to be too concerned about [how other featherweights felt about the decision]. He’s saying he’s prepared for so many five-round fights — I think he had eight main events in a row or something like that. Like he said earlier, he was the only guy coming off a win, he didn’t really worry too much about who got the fight, but he just felt like he was next in line.”

Nine years is a long time for any athlete, but Jung, in particular, called it a “night and day difference” between where his career stood in 2013 and where it stands today.

Though he was once known primarily as a brawler, Jung has reshaped his approach in recent years under the tutelage of Cha and the team at Arizona’s Fight Ready gym, evolving the technical side of his skill set and learning the importance of patience and a good game plan. It’s a difference that Jung expects to pay dividends in his second shot at a UFC belt.

“I think the hardest thing for him in any camp is always missing his kids, but the training difference from [South] Korea to Fight Ready is such a difference, there’s no way he can’t come here, he said. Cha translated Jung and said that he must come to the camp to train and sacrifice to become a champion.

“If he thinks of it as just like a fight, like a brawl, and just scrapping in there, then he can actually train in Korea. But now he looks at this as a sport, where he’s actually competing, looking to win rounds. We always talk about him as, we’re trying to win seconds, sequences. We’re trying to win minutes — minutes will win rounds, rounds wins fights. His perspective is completely different [now at Fight Ready].”

on fighting and competing.

One voice was heard by Jung for this camp, so it even shocked “The Korean Zombie.” Cejudo, a former two-division UFC champ, has also been a Fight Ready coach and heavily participated in Jung’s preparations for Volkanovski. Despite the fact Cejudo being one of the most vocal fighters asking for the chance to enter UFC 273 at short notice,

It’s a gesture that Jung has greatly appreciated.

“Henry really surprised him a lot, because we’ve seen him a lot in camp and stuff like that, but Zombie got the title shot and he’s been helping out so much,” Cha said in translating Jung. “He’s been at every practice, every team meeting that we have for Zombie. He’s actually doing sparring rounds, playing around with him, so he’s super grateful. He did not realize how intelligent he was, both fight-IQ-wise as well as everything else. Like when you see him on TV, he’s cringey and all that, but off camera he’s telling [Jung] what to do, he’s wrestling, coaching him as he play spars and stuff like that. He’s an integral part of the camp .”