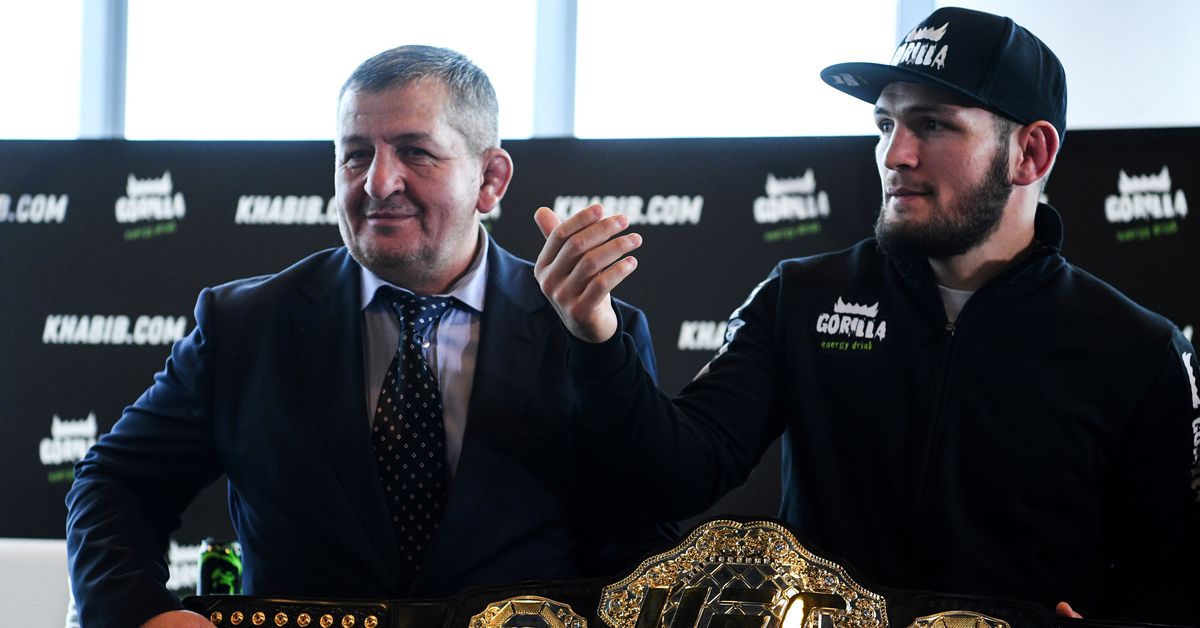 Khabib Nurmagomedov had plenty of influences in his career who helped lead him to a historic run through the UFC and a perfect 29-0 record before retiring. But it’s hard to imagine anybody had a bigger impact than his father.

As he was being inducted into UFC Hall of Fame on Thursday, Abdulmanap got emotional and paid tribute to his father Abdulmanap. He died almost exactly two years back from complications due to COVID -19..

As he detailed his journey to become one of the most dominant fighters to ever compete in the UFC, Nurmagomedove couldn’t help but give credit to humble beginnings and the time his father sacrificed to allow him to reach such great heights.

” I grew up poor in a small village.” Nurmagomedov said. My father brought us from the village and sold our house. He then took me, my brother and my cousins from the capital to my village. He rented a very big house and we all was living together. Together we would often eat. We was going to school, come back, training, come back, just father, trying to invest everything we have. Time, energy, money, he invested in us. He invested in us.

“From this house comes six world champions, UFC champions, a lot of champions and very good people because father invested everything that we have. He gave us a good education. We had the opportunity to study in top schools and universities. He also invested all of his wealth. He was always investing in others throughout his entire life. For me, this is a huge motivation. Even now when I’m finished, right now I’m trying to invest in people. This is because it’s the best investment .”

In addition to the schoolwork, Nurmagomedov was also trained in many disciplines of wrestling and Russian sambo by his father. This helped him prepare for a career as a UFC champion.

There was no rest for the weary in the Nurmagomedov home, as Khabib had to work for everything he wanted because his father wouldn’t allow him to do anything different.

“‘You think I’m going to give you everything what you want? No, you have to deserve this.’ It was a very big lesson.”

According to Nurmagomedov that this lesson stayed with him all his life. It’s an invaluable piece of advice that he shared to everyone who listened to his speech.

” I know that there are a lot of dads watching and many people looking at us online, but if you want to make sure your kids succeed, don’t just give them what they want. Nurmagomedov stated. “You guys have to show by yourself, be an example for your kids.

” This is extremely important. Many fathers will tell their children, “Don’t go there. Don’t do that. Do this. Be on the right way.” Your son or daughter will follow your example. Your kid’s going to follow you. Just be an example for your kids. This is my advice for all fathers and mothers.”

He never lost sight of what his father had taught him. He continues to refer back to those lessons, even after becoming champion in UFC and one the most wealthy athletes in the sport.

“I can do whatever I want in the world,” Nurmagomedov explained. “I can buy any house in the world, but this is gives me good energy. It isn’t who I am. This is not what my father teach me. I’m very happy about this because I remember like 10 years ago, my mind was completely different. ‘Oh, I’m going to become champion. I will be rich. Everything .’

I want to own.

Nurmagomedov continues to carry on his father’s work by giving back to the next generation of athletes, including current UFC lightweight contender Islam Makhachev, who counted Abdulmanap Nurmagomedov as his coach over the years as well.

The 33-year-old Dagestan native believes that will be the best way to honor his father moving forward — by teaching those same lessons he learned to the fighters who seem destined to become champions themselves.

“I’m currently doing what I do, and you guys should believe that if there’s nothing the next four to five years we will have three UFC champions out of our gym,” Nurmagomedov stated. “Believe me, guys. You can save this video, and you’re going to understand what I’m talking about.

“I really believe [Islam is] going to become champion. What is Islam, you ask? This is the legacy of my father .”