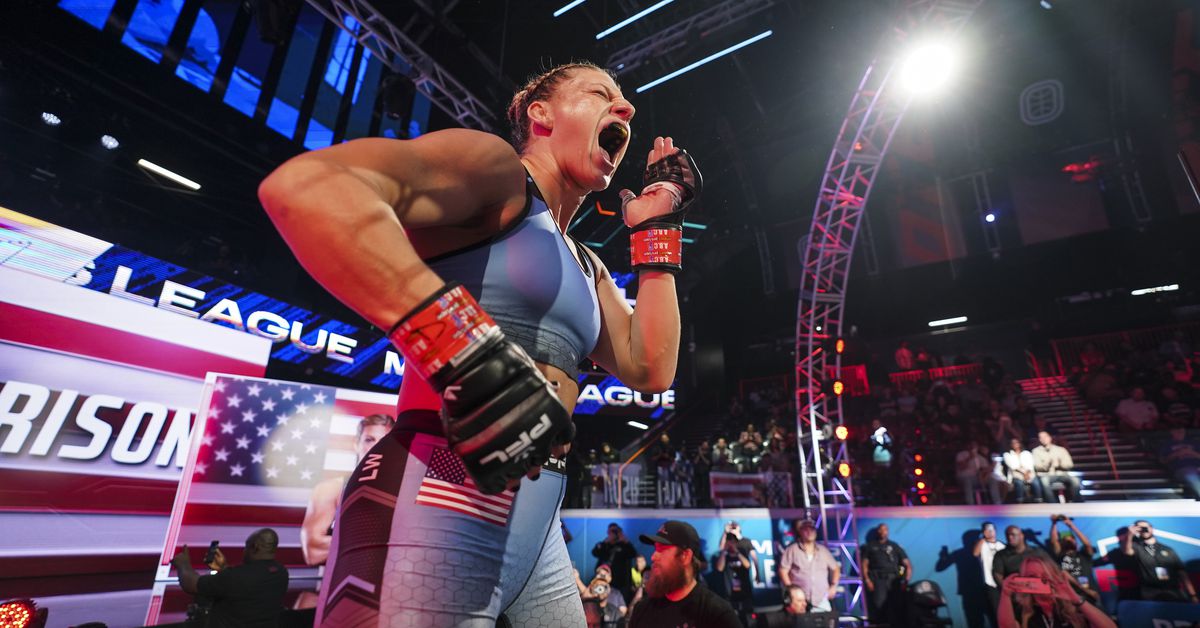 Harrison was informed by her team about Cyborg’s decision to enter professional boxing. She vented via Twitter and then came on the show to push again for a fight against the legendary women’s MMA fighter.

“We can do winner takes all, or we can do when she loses, she gets to keep her purse,” Harrison said. “If she needs help getting the deal signed, I will call [PFL executives] Peter Murray … and John Davis and ask them, whatever price she wants, I will speak to them on her behalf.

“And I’ll go through a full [U.S. Anti-Doping Agency] drug testing – I will be drug tested every day from now until the fight, if she’s worried about that, and she doesn’t have to be drug tested at all. Only thing that I request is that elbows .”

Harrison was asked why she wanted to strike the weapon. She replied: “So that I can get one through her skull .”

Harrison is scheduled to face Martina Jindrova on Aug. 20 in the PFL 2022 Playoffs. It’s her third try at a $1 million tournament win that would further establish her as one of the best featherweights and overall fighters in women’s MMA. Harrison is determined to become the best at both and Cyborg’s fight is an excellent way to do that.

To hear Cyborg is headed to the squared circle against Simone Silva on Sept. 25, Harrison couldn’t help herself and called out the champ on social media, sparking a back-and-forth with the Brazilian.

On second thought, u can have my purse if U win. Keep yours when u lose b/c you’re gonna need it.

And I’ll agree to full usada drug testing and u can juice to the gills. Only one thing that I want is for elbows to touch the ground in order to make it legal.

Harrison was referencing Cyborg’s 2012 drug positive for steroids that resulted in a one-year suspension. She was flagged for a potential anti-doping violation in 2017 under the UFC anti-doping program but was granted a retroactive therapeutic-use exemption for a banned substance she failed to disclose while in the drug testing program.

Asked about her “irony” tweet, Harrison pointed to Cyborg’s hesitance to face her based on her past opposition and current record, indicating she hadn’t earned the fight.

“OK, in boxing,” Harrison added to concede the difference between boxing and MMA.

Prior to Harrison’s impromptu appearance on The MMA Hour, Cyborg sat down with Ariel Helwani and indicated she is open to fighting Harrison. She also wouldn’t feel unfulfilled if the matchup didn’t materialize.

Cyborg said a fight with Harrison would need to be a co-promotion between Bellator and PFL, though she also said she is currently a free agent. (A source familiar with negotiations said that MMA Fighting Cyborg was not a fully free agent, and she is still within the exclusive negotiating period for her promotion as a champion. )

“I’ve been in a lot of big fights in my career,” Cyborg said. Cyborg said, “I believe she needs one of the biggest fights for her career.” I’m happy with my career. I can finish my career and not fight Kayla. It’s going be amazing if the fight takes place. It would be wonderful if people could watch it. But just not on the internet, they have to make it happen.”

Cyborg stated that there were no negotiations between Bellator and the PFL over potential fights, but Harrison claimed that PFL executives had approached Cyborg with lucrative offers.

After the twitter spat, PFL executive Donn Davis even joined the fray and received another passionate response from Cyborg.

she gets an equal fight purse based on what? Being your champion? Beating a fighter who’s 12-13? All the PPVs she sold?

Harrison said the important thing for MMA fans to consider is that she’s tried to make the fight with Cyborg happen. It hasn’t as of yet because of how her PFL contract is structured, but that could change if the two promotions decide to work together.

“[Cyborg] could be like Thanos and have all the jewels,” she added, referencing Cyborg’s career titles in Strikeforce, UFC and Bellator. “That’s a legacy that can’t be tainted. I’m giving her the opportunity.”

Harrison made an offer to Cyborg under the Bellator banner in April, but it was rejected by her contract with PFL.

At this point, Harrison believes Cyborg doesn’t want to fight her. She isn’t letting go just yet, however.

” I shouldn’t talk about it, but I should probably be focusing on my fight. I want this fight to happen,” she stated. I’m real. This is what I want.”