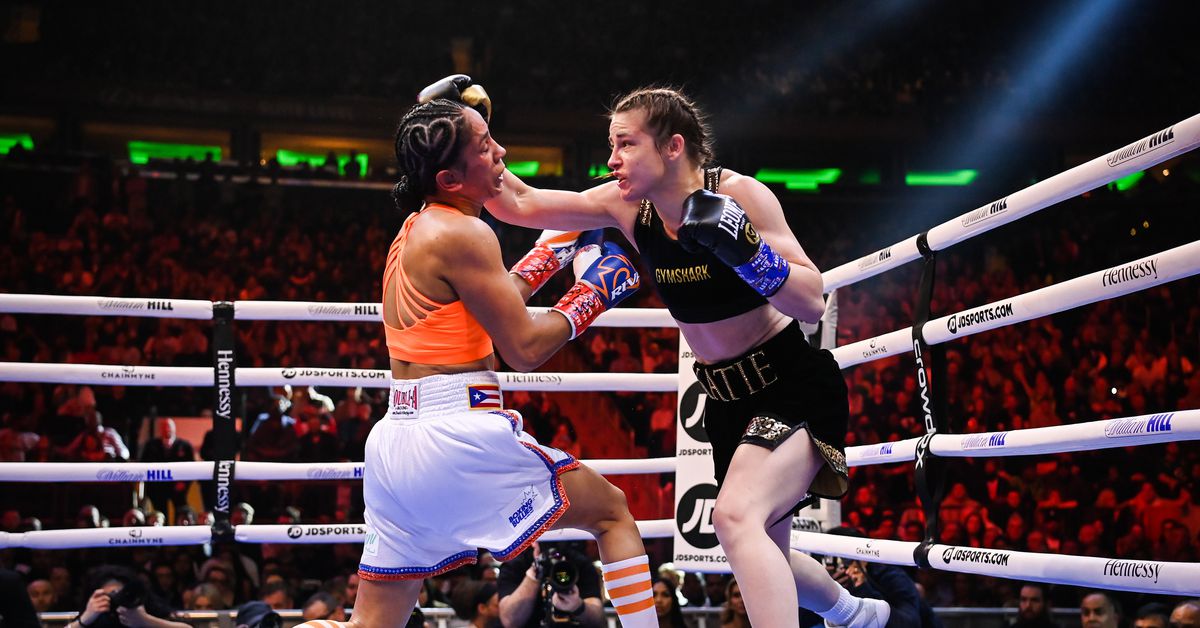 Nothing came easy for Katie Taylor but the Irish superstar remained undefeated after a 10-round war with Amanda Serrano in arguably the greatest fight in women’s boxing history.

The battle was back-and-forth throughout almost every round with Serrano nearly scoring a finish in the fourth with Taylor then surging back late to ultimately secure the victory. When it was over, two judges scored the fight 97-93 and 96-93 for Taylor with the third official giving a 96-94 score to Serrano.

It was close but Taylor got the win as she moved to 21-0 in her career.

“What a fighter Amanda Serrano is,” Taylor said. “The biggest fight in female boxing history. It feels great to be in this position. I knew exactly that I had to dig deep in this fight. She’s a phenomenal fighter and a great, great person. I knew I was going to be able to come through.”

A raucous and sold out crowd at Madison Square Garden was rising and falling with nearly every punch thrown as Serrano was consistently acting as the aggressor while Taylor was looking for counters. Serrano seemed to find her best punch with a left hand that was landing consistently, although Taylor was quick to move out of the way and fire back with power.

Serrano was mixing up her punches as she targeted the head and body while never slowing down during any exchange. Taylor started to find more success with her combinations in the third round as she started to unleash her shots in succession.

As the fourth got underway, Serrano trapped Taylor in the corner and she really started to unload on her punches as the Irish fighter was absorbing a lot of punishment. Realizing she was connecting at will, Serrano really started coming after Taylor and she was really staying on target with her punches.

An overhand right cracked Taylor as blood started to trickle down her nose and Serrano was feasting on an opening like a predator going after its prey. Taylor was hurt badly as if she might topple over at any moment but she refused to go away as Serrano just kept putting pressure on her.

Serrano’s confidence was really surging because Taylor’s eyes still looked glossed over even as she was standing in the pocket for exchanges. The crisp, technical boxing from Serrano continued while also displaying great defense to deflect anything hard coming back from Taylor.

That’s when the high output from Serrano started to suddenly slow down, which allowed Taylor start forging a comeback. Taylor was sticking a hard left hand in Serrano’s face and then moving out of the way before she took much in return.

Taylor was landing with better volume and accuracy with Serrano reacting to her punches as she began lunging forward in an attempt to turn the momentum back in her favor.

Realizing the fight was incredibly close through nine rounds, the fighters just threw everything at each other trying to either score the knockout or swing the judges in their favor. Taylor was willing to trade bombs to the very end with a jaw-dropping exchange closing the fight with the lightweights just launching punches at each other until the bell sounded.

While Serrano felt she did enough to deserve the decision, she had nothing but praise for Taylor in her performance with hopes that they could run it back again.

“They say nobody wants to see women!” Serrano shouted. “Katie’s a great champion. I’m truly honored to share the ring with you. Women can sell, women can fight and we put on a hell of a show.”

“Let’s do it again, Amanda,” Taylor said to Serrano.

It was a monumental occasion, especially as women’s boxing has struggled to gain widespread acceptance and praise over the years but Taylor and Serrano went to war in what will undoubtedly be hailed as one of the best matches of the year when 2022 is over.