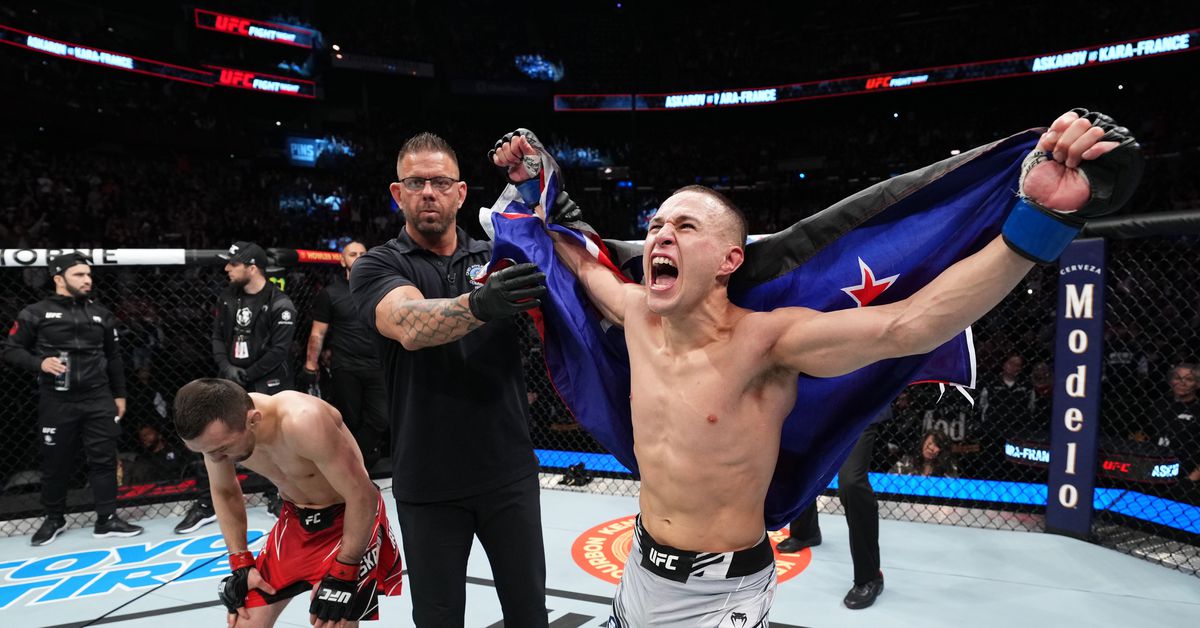 Lately, UFC flyweight champion Deiveson Figueiredo and ex-champ Brandon Moreno are making a lot more noise about another contender than a fourth fight between them.

Figueiredo recently called out ex-champ Brandon Moreno for “racist comments” and said Kai Kara-France was his new target, while Moreno said the champ’s “ovaries hurt” and couldn’t make the quadrilogy reportedly planned by the UFC.

Whether the drama is manufactured to sell another fight or an indication that Figueiredo vs. Moreno 4 is not happening, Kara-France is ready to take the spotlight. But of course, he has a preference should he get the call to step in the mix.

“Both fights [Figueiredo and Moreno] are great for me but I would love Figueiredo to fight,” Kara-France stated Wednesday on The MMA Hour . “The way he amps up the fight, just his style, people really think he’s ‘God of War.’ But I want to show him that there’s levels to this and there’s a new ‘God of War’ in town, and that’s me. He will be the one to see me. He needs to be tested.

“I feel like I can put him away, so it would be a great fight, and imagine doing it at Marvel Stadium in Melbourne, 60,000 people, making the walkout, feeding off the energy and putting it on him.”

Kara France made an argument for the title by beating Askar Askarov in UFC Columbus. It was his third straight win in a 7-2 octagon run and eliminated what many MMA observers believed was a rightful contender in Askarov. Kara-France was a +300 underdog in several betting lines.

Before Kara-France can agree to any deal, it is likely that he will need to sign a new contract. His UFC Columbus appearance left only one fight on his contract. The promotion won’t move forward without an agreement.

Kara-France said he’ll confer with his longtime coach, Eugene Bareman of City Kickboxing, and UFC matchmakers. If he’s required to take another fight, or serve as backup for Figueiredo vs. Moreno 4, he’s right where he needs to be.

“Both champs want to face me,” he stated. “They’re both saying, ‘I don’t want to fight for the fourth time, I want to fight this guy.’ So, the ball’s in my court. That was my second to last fight on my contract, so we’re in a great place. We’ll now talk to Mick, Eugene, and Dana about the next steps .”

The fight with Askarov was Kara-France’s gamble on himself as he faced the proposition of losing his place in line.

“High-risk, high reward,” said he. “No one wanted to fight this guy. A lot of people would have sat back after knocking out a former champion, let’s just sit on this and see what happens. However, I do not want to wait. I don’t want to wait and be given a title shot, I want to earn it. My goal is to prove everyone that I am the best in the world .”

There’s already ample backstory between Kara-France and his potential opposition. Both he and Moreno were on opposite teams in The Ultimate Fighter . They faced each other in the UFC 245 octagon, with Moreno winning a victory. Before he moved to Arizona, he was coached by Henry Cejudo and Eric Albarracin.

“[Albarracin] was my coach on Season 24, so I know [he and Cejudo], and they obviously felt disrespected by Izzy when Izzy knocked out Costa, and there was a bit of back-and-forth and a bit of beef there,” Kara-France said. They keep saying that they accept the fight [with] against Figgy. But, if [Adesanya is] is fighting on the same night, it won’t happen.

” I’d like to see Figgy in Cejudo’s presence and tell him that the shy youngster that you had coached on The Ultimate Fighter is no more. “I’m grown up and mature, and I am a veteran. So it’s a whole different ballpark.”