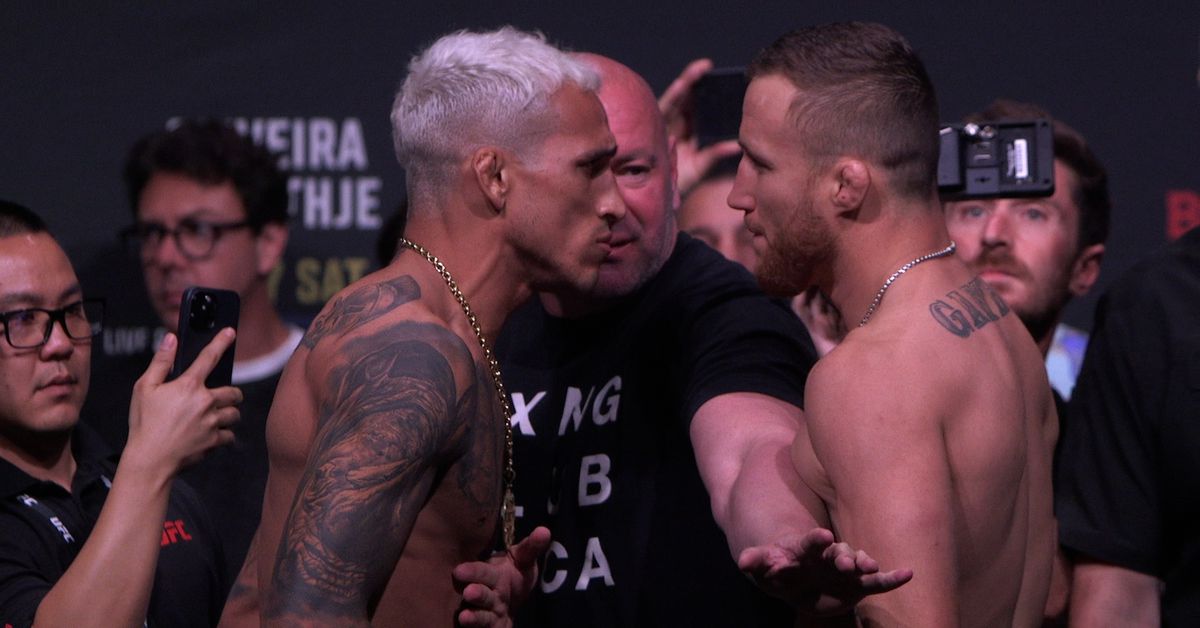 Justin Gaethje isn’t changing his demeanor towards the objected at UFC 274 even if he’s understandably angry after now former lightweight champion Charles Oliveira missed weight earlier in the day.

At the ceremonial weigh-ins on Friday, Gaethje engaged in an intense faceoff with Oliveira as the fighters prepare to do battle in the main event from Phoenix. Just hours after Oliveira weighed in at 155., the staredown took place. 5 pounds — half a pound over the lightweight limit — and he became the first champion in UFC history to be stripped of the title for missing weight.

In the wake of Oliveira’s failure to reach championship weight, Gaethje received word that he could still win the lightweight title if he wins Saturday night.

“Same mission,” Gaethje shouted to a raucous crowd. “That s*** doesn’t matter. Tomorrow night, it won’t have any effect on anything. He’s going to be beaten out. Before he lost weight, I was there to get him out.

This will be Gaethje’s second attempt at becoming UFC champion after he came up short in his previous bid after losing to Khabib Nurmagomedov by submission back in 2020.

Oliveira will be competing as a No. 1 contender’s bout after he was stripped of the championship for missing weight.

UFC officials said on Friday that should Oliveira walk away victorious on Saturday night, he would then compete for the undisputed lightweight title against a different contender in his next fight.

When he addressed the crowd, Oliveira didn’t offer up any excuses but rather declared that belt or no belt, the real champion will be fighting and winning at UFC 274.

“These things happen,” Oliveira said. “You can’t explain God. The champion has a name and it’s Charles Oliveira and I’m going to shock the world tomorrow.”