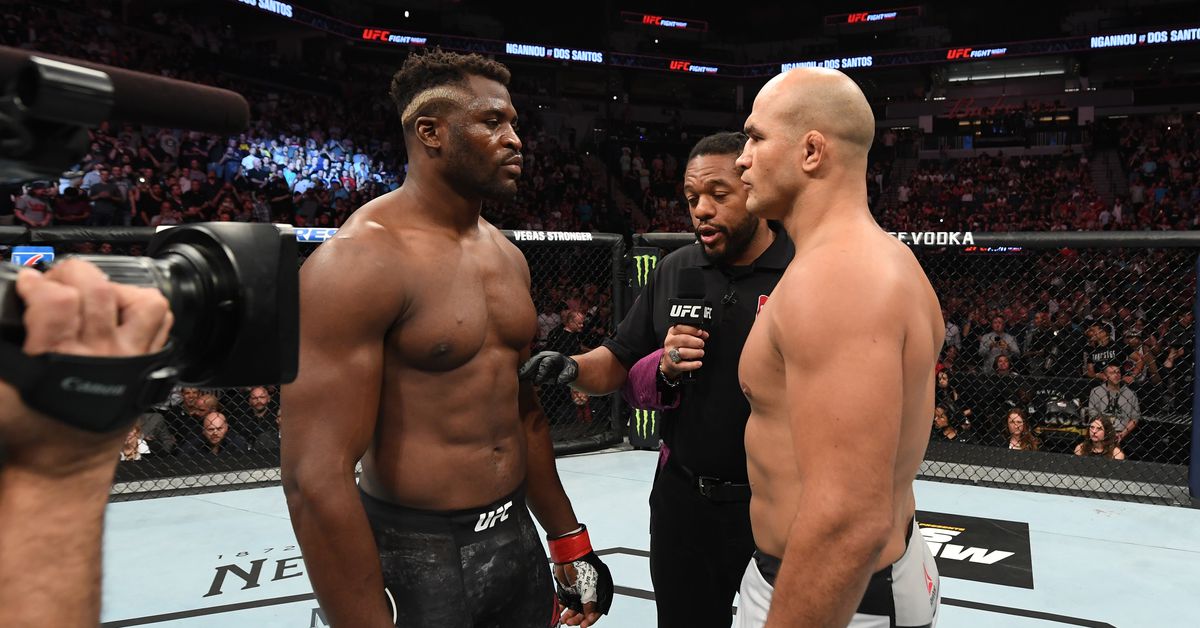 Can Francis Ngannou upset one of the greatest boxers of all-time in the squared circle?

Junior Dos Santos, who shared the octagon with Ngannou, doesn’t give the UFC heavyweight champion much of a chance.

Undefeated boxing champion Tyson Fury recently improved to 32-0-1 with his devastating knockout of Dillian Whyte at Wembley Stadium. Fury invited Ngannou to the ring after the fight and suggested a match, either boxing or hybrid, to determine, according Ngannou, “who’s the worst motherf *****?”

Dos Santes once dominated UFC’s heavyweight division. His crisp boxing knocked out Fabricio Werdum and Cain Velasquez, as well as Frank Mir. He still displayed power even after losing his belt.

Now scheduled to face Yorgan de Castro on May 20 at Eagle FC, Dos Santos broke down the potential boxing clash between Ngannou and Fury on this week’s episode of MMA Fighting’s Portuguese-language podcast Trocacao Franca.

” Based on his performance [vs. Ciryl Gane],, I don’t think he will have much success boxing,” Dos Santos stated about Ngannou. “Aside from his technique being a bit limited in the way he moves … boxing isn’t just punching, it’s movement, how where you stand and how you walk. Tyson Fury, a huge man with great moves, is Tyson Fury. We saw in [Ngannou’s] last fight that he would’ve lost to Gane if he’d stayed on his feet, so he was smart enough to decide to show his ground game.

“I see [Ngannou] being quite limited for the boxing world,” Dos Santos continued. “We’re talking about the guy who beat everybody — Tyson Fury, super tough, gigantic. … And as for the punching power, Tyson Fury fought Deontay Wilder, who hits like a truck. [Wilder’s] Punch is an absolute demolisher. We don’t know if Ngannou is as powerful, or if he has less.

“Ngannou isn’t at the same level as Deontay in boxing. Although I see a difficult fight, Ngannou is what everyone wants to see, which is his knockout power. It’s done, he lands. It’s especially important at heavyweight when it only matters one landing. If it lands well, you go down.”

However, Dos Santos doesn’t believe the match will ever come to fruition. Ngannou and his team claim he will become a free agent when his contract expires in 2023, even though he still holds the UFC heavyweight title. Dos Santos, a former champion of the UFC, isn’t so optimistic about Ngannou leaving the organisation as the beltholder.

“He shouldn’t have lost [to Gane] now,” Dos Santos laughed. “From what I’ve heard, Ngannou could have made way more money, millions even, in his last fight, but it was his decision not to re-sign because his plan is to box Tyson Fury. That would be exceptional for him, because in boxing, financially speaking, when you become champion or fight at the top, you can make a portion of pay-per-view, so money is really big.

” We see the amount of money that boxers make. I wish him luck, [but] I think it’s a bit complicated at the moment, being UFC champion, to go out and box.”

“Cigano always wanted to be a boxer during his UFC reign. However, he never got the chance that Conor McGregor had, who famously went on to box Floyd Mayweather. Dos Santos was scheduled to box Kubrat Pulev (28-2 in boxing) at Triller Combat 2 this past February, but the event was cancelled.

“I’m making good money in a good fight on a great platform and with great possibilities I can embrace. In the UFC, I was tied to the opportunities they brought me. If I feel the need to, I am able to work in another way. I can call it freedom. That freedom is interesting.”