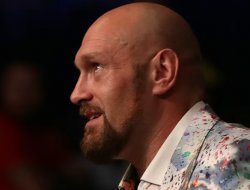 “Honestly, from the point of view of both a fan and a heavyweight champion, this was a very, very spectacular fight,” Fury admits. “They both did a great job, and Joyce, to his credit, took out a very strong and well-prepared Joseph Parker, which now, in my opinion, is in the top 5 of the division.”

Tyson also did not deny himself the pleasure of speculating about Joe’s potential fights with the heavyweight elite:

“I think Joe will beat both Joshua and the middleweight (Usyk). But with the speed and power of Wilder, he may have problems. As for me, he would never hit me in 12 rounds. He wouldn’t hit me even if he threw a pinch of rice. Look, he’s a big dude, but I’m bigger. He is heavy, but I am heavier. He is a good fighter, but I am the best in the world for a reason. It is what it is”.