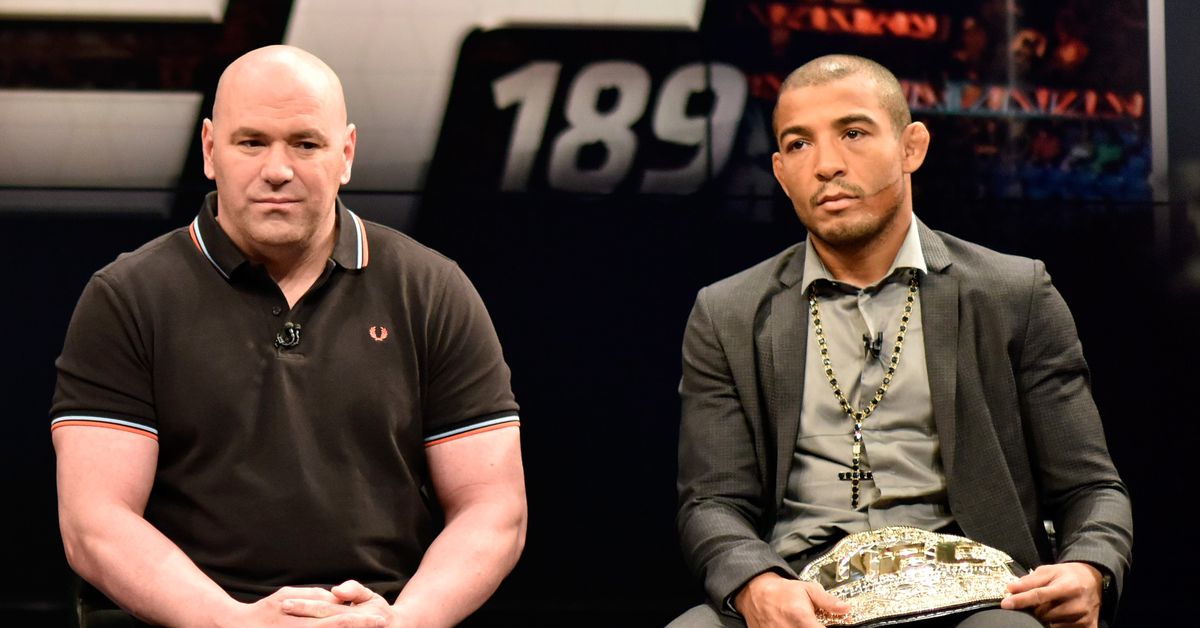 Jose Aldo had no idea, but asking for his UFC release to compete in boxing might have saved the life of Jose Aldo III.

Speaking on this week’s episode of MMA Fighting podcast Trocacao Franca, the former UFC featherweight king revealed he texted company president Dana White to inform him of his desire to retire from MMA, but he hoped to get clearance to compete in other forms of combat sports, such as boxing, despite having a one bout left in his deal.

“A good friend was interested in boxing and asked me to write a letter stating that he would consult the UFC. Aldo agreed. Dana texted me on Thursday and I did the same. Dana thanked me and said that the UFC is always available for me. He has great affection for me and my family, he was always very close to us.

” After that message – which was not a boss speaking to his employee but two people who like one another – I presented it to [my wife] Vivianne. She was still pregnant at the time and got emotional, her blood pressure went up and we had to go to the hospital. On Friday, she [went back for some tests and] had to be admitted at the hospital. She had preeclampsia and [the blood pressure] went up after Dana’s message.”

The doctors couldn’t decide whether or not it was time to give birth to Aldo III since he was only in his 36th week of pregnancy. Although the doctor had hoped that he would be kept in hospital for another two weeks, it was not possible. It saved the life of his son.

“The actual birth was really crazy,” Aldo said. “It looked like everything would go wrong. He was born with a true knot [in his umbilical cord], and if we had waited two more weeks, I wouldn’t be at home with little Aldo here.”

” I will not stand against someone such as that,” Aldo said, referring specifically to White. He’s been a great help in all aspects of my life, even if it was unintentionally. It’s a subject that makes me feel emotional. He is not my son, I owe him his life. But it was his message that made Vivianne feel emotional. Her blood pressure went up and she had to be taken to the hospital. He was born against all odds, but Dana… God constantly puts good people into our lives to assist us .”

Aldo III is a healthy young boy and his legendary father wants to enjoy retirement to be more present in his life – as well as his daughter Joana – after dedicating 18 years of his life to mixed martial arts.

Aldo stated that it was always been a dream to have a child. We got pregnant a while back, but lost the baby. I talked to [Vivianne] and told her to let it go because she suffered a lot with the [miscarriage]. But it came naturally now, as God wanted, and from that text to leave [the UFC] I got something back, life.”

Aldo stated that his manager Andre Pederneiras had been approached by several combat sport organizations. These ranged from MMA, boxing, and Karate Combat. However, he is still contracted with the UFC. He’s open to discussing options in the future, but returning to MMA is “highly unlikely” – especially since he’s still under contract with the UFC.

” I can compete in any organization, jiu jitsu or boxing. Aldo stated that he would show his offer to UFC officials and they would clear him. “My contract is still valid, mainly because people talk badly about the UFC and they have to be cautious. They have a point. I get it. I will never fight the UFC or anything like that, they made me who I am. UFC is the reason I am famous and who I am today. Thanks to my work, but together with the UFC. I still have a contract with the UFC and any fight I want to do, I’ll show it to them and they will clear it.”

The 35-year-old veteran is mostly interested in competing in professional boxing, working his way up towards a big bout instead of facing YouTubers, but not for too long.

“They can bring a truckload [of money] and I won’t fight MMA,” Aldo said of other MMA organizations. “I’ll only fight [MMA] if it’s in the UFC. Dana will talk with me if I want to fight tomorrow. It will be in UFC. But I won’t fight elsewhere. They know that.”