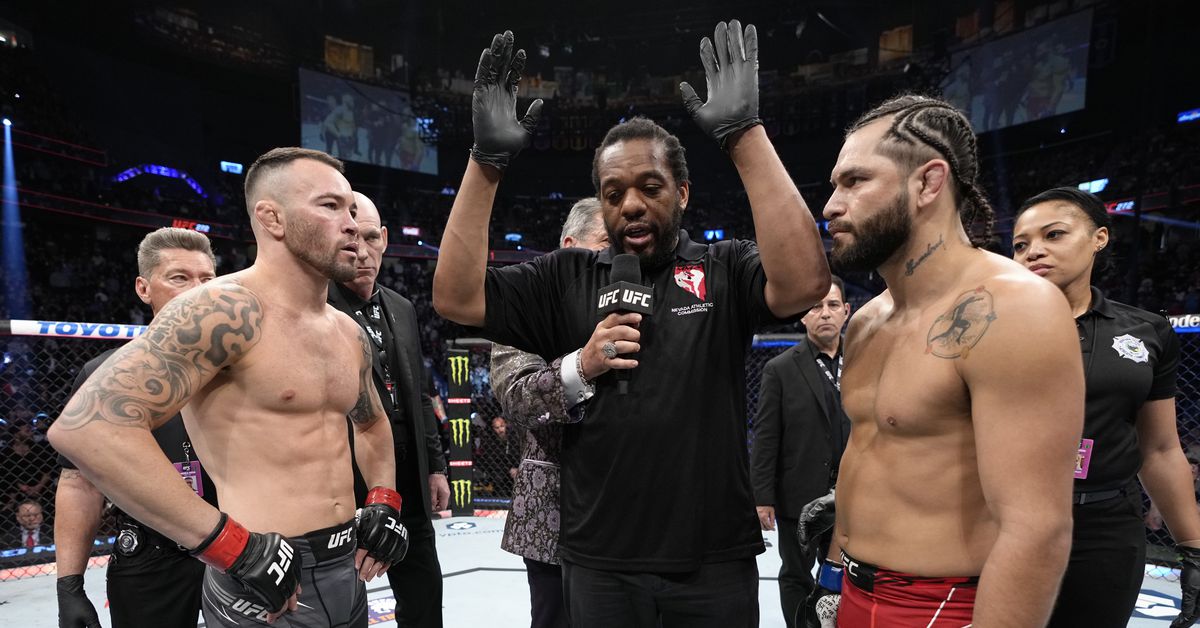 If Jorge Masvidal had a choice, Herb Dean would likely not be the referee in any more of his fights moving forward.

Masvidal faced former friend and teammate Colby Covington in a main event grudge match at UFC 272 this past Saturday night where Covington dominated en route to a unanimous decision. Things got contentious in the first round after Covington looked to land an accidental eye poke on Masvidal, who then brought it to Dean’s attention in the moment.

Dean allowed the fight to continue, and Covington swarmed on Masvidal, landing a takedown and a clear 10-9 round. Although “Gamebred”, won’t blame Dean for his loss, it could lead to some conversation.

“The eye poke was pretty bad,” Masvidal told reporters at the UFC 272 post-fight press conference. “The only thing that’s hurting right now is the f****** eye. My eye is still throbbing right now.

” I’ve been in a few mishaps with Herb Dean. But, it’s still a mystery to me why he didn’t take responsibility for the situation. [He] hit me with a punch and missed.

“I’m not going to take anything from [Covington] winning the fight because that was just one sequence, but it would’ve been cool if he could’ve stopped it there and I could’ve gotten my breathing to restart since Colby poked the s*** out of my eye. Herb Dean and I don’t have the best record. We’ve been in a few mishaps. Refereeing .”

In 2019, Masvidal had one of the most impactful years in UFC history, picking up stoppage wins over Darren Till, Ben Askren, and Nate Diaz. Since then, the 37-year-old has not been able to get his hand raised, including a one-sided decision loss to champion Kamaru Usman at UFC 251, and a stunning knockout loss to Usman this past April at UFC 261.

Masvidal again wants to be clear about his decision to not use Dean’s eye poke to excuse himself. However, the veteran referee issued a warning to Covington before the second round, after having used instant replay. But in a sport where momentum can play such a factor, the first five minutes certainly sent a lot of it to the Covington side.

” That position would not have occurred if he hadn’t poked my eye,” Masvidal stated. It’s Herb Dean stuff. Everybody here, if you’ve seen fighting, you’ve seen Herb Dean have numerous hiccups.”