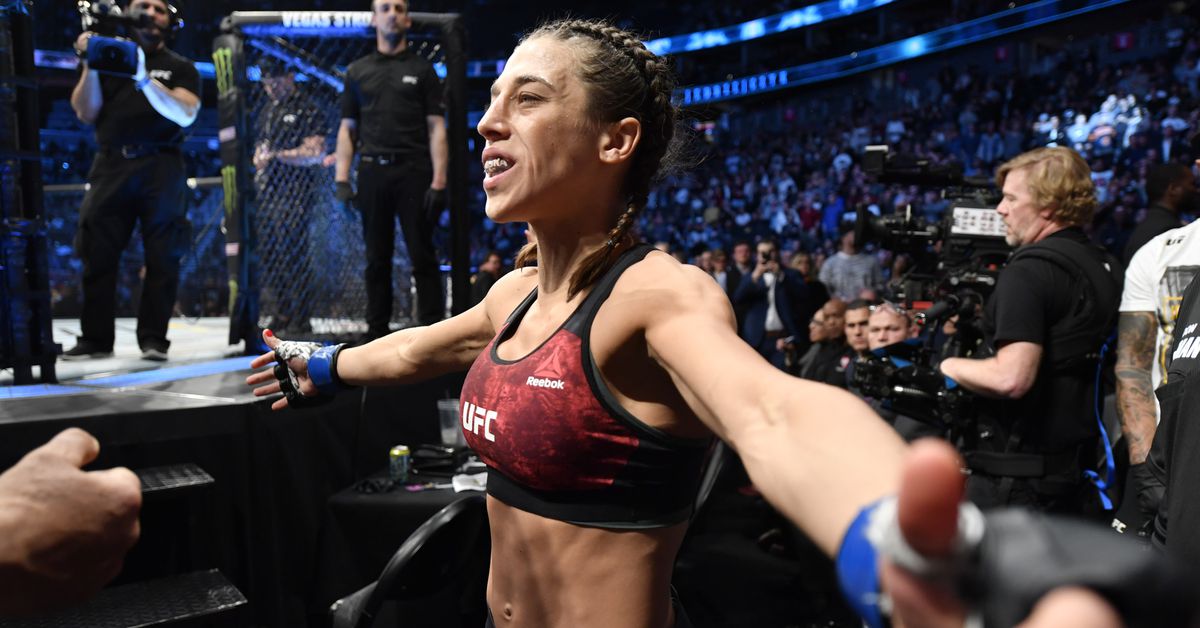 It’s been two years since Joanna Jedrzejczyk last competed in the UFC, but just because she hasn’t fought doesn’t mean she isn’t busier than ever these days.

The former UFC strawweight champion is still training every day but also manages to juggle endorsement deals and television appearances with other opportunities since she became one of the most well-known names in combat sports.

Make no mistake, Jedrzejczyk is still just as passionate about fighting as she was after first signing with the UFC back in 2014, but now she’s really started to understand her worth inside and outside the cage.

“I wanted to make sure that everything is going the right direction. Because when my fighting career blew up, I was focusing only on my fighting career, and it was good, but I like to do so many things. I’m personal with so many hobbies, passions, businesses. It was important to me that everything was moving in the right direction. Now I have a clear head, a strong heart, and I can be focusing only on training.”

Currently in Florida where she’s training alongside her coaches at American Top Team, Jedrzejczyk is still anxiously awaiting an official offer from the UFC for her next fight, but she’s also been very vocal about her current contract situation with the promotion as she approaches the end of her deal.

Jedrzejczyk has always maintained a strong working relationship with the UFC, but that doesn’t diminish her desire to get paid what she’s worth, especially now that she’s found so much success outside the promotion.

“I feel like I’m making more money outside the octagon,” Jedrzejczyk said. It’s almost a set situation for me. My passion and hobby turned into my career in fighting. It’s all happening, we’re talking because of my legacy and how dedicated I was and I am, because of MMA and my job.

“It’s kind of sad but I get as much as I can from here and now because I’ve been doing this for 18 years, you all know this, but my life got changed when I got into the UFC and became the champion and got more opportunity. While I made money initially, I am now trying to make as much as possible while doing what I love. Yeah, I accomplished a lot in this sport and it’s not about the money, but I feel like I’m in the sport where I can ask for more money because I deserve this. This is what I’m worth .”

Because she has so many endeavors away from fighting, Jedrzejczyk is constantly bombarded with questions about why she would even bother returning to the UFC now that she’s set up a career for herself that doesn’t involve getting punched in the face for a living.

While a day will come when she actually retires, the 34-year-old veteran absolutely wants to compete again, but she’s also smart enough to address the inadequacies in her paycheck when compared to her drawing power and fighting ability.

“It’s hard because so many people are like, ‘Maybe you should stop fighting, you shouldn’t even be doing this,'” Jedrzejczyk said. “You do this, you do that, you have this business, the other business,’ but you can’t stop the love. Love is real and it’s the only real thing in this world.

“I love this sport. It is something I long to do. I feel like I can do it. That’s it. It’s hard because everyday I get messages, ‘Are you retired?’ or, ‘She is retired,’ or other things. It’s hard.”

Joanna Jedrzejczyk reveals biggest roadblock to her UFC return: ‘I deserve a bigger piece of the cake’

Despite no longer holding the 115-pound title, Jedrzejczyk knows she still has a massive following in the sport, and that drives up her value to the UFC.

While championships in the UFC are important, she understands that starpower in MMA is more significant than any other sport.

” I feel that we are hearing about money,” Jedrzejczyk stated. “Like [Kamaru] Usman got more money. [Israel] Adesanya got more money. Although I may not be the champion anymore, my experience in the business has been so long that I have had a huge impact on this sport and women’s sides. I feel like I can get this as well, because I’m bringing people to the arenas. My performances are always spectacular.

“Look Jorge [Masvidal], Look at Dustin Pourier. [Conor] McGregor may be something different, but I believe I could be the female counterpart of these men and my colleagues .”

Beyond recognizing her drawing power for the UFC, Jedrzejczyk also knows that she can’t fight forever, and that also plays a part in what she hopes to receive in future contracts.

There was no better evidence to that fact that her last fight against Zhang Weili, in which Jedrzejczyk absorbed 165 significant strikes over five rounds. Jedrzejczyk was not in serious harm, but it is something that forces her to think hard about the future of boxing.

“You saw me after my last fight,” Jedrzejczyk said. I want to become a mother. I would like to become a successful businesswoman. I want to enjoy my life. So I don’t want to get beat up or get health issues for nothing, but if I get the paycheck and do it.

“It is hard for me. Everyday, I think: Should I be fighting or not? I pray everyday like, ‘God, help me, give me the answer.’ Like what happened to [Dhiego] Lima the last time, he said ‘I’m not fighting anymore, God gave me an answer.’ It’s a little bit different with me, but it’s like, should I or not? It’s hard to stop doing the things we love doing. We will see. I hate to say this but now it’s all about the money. Somehow it’s all about the money. Because there’s so much money involved in this sport, I feel I have more options than I did when I was the champ .”

Regardless of how she feels about money and negotiations with UFC over a new contract for her, Jedrzejczyk believes that she will continue with the promotion. But it has to make sense.

” I know that it is a business,” Jedrzejczyk stated. Jedrzejczyk said, “There’s some value in this business but I would like to remain with the UFC until the end of my fighting career.” The bright side is what I see and I think I’ll resign my contract .”