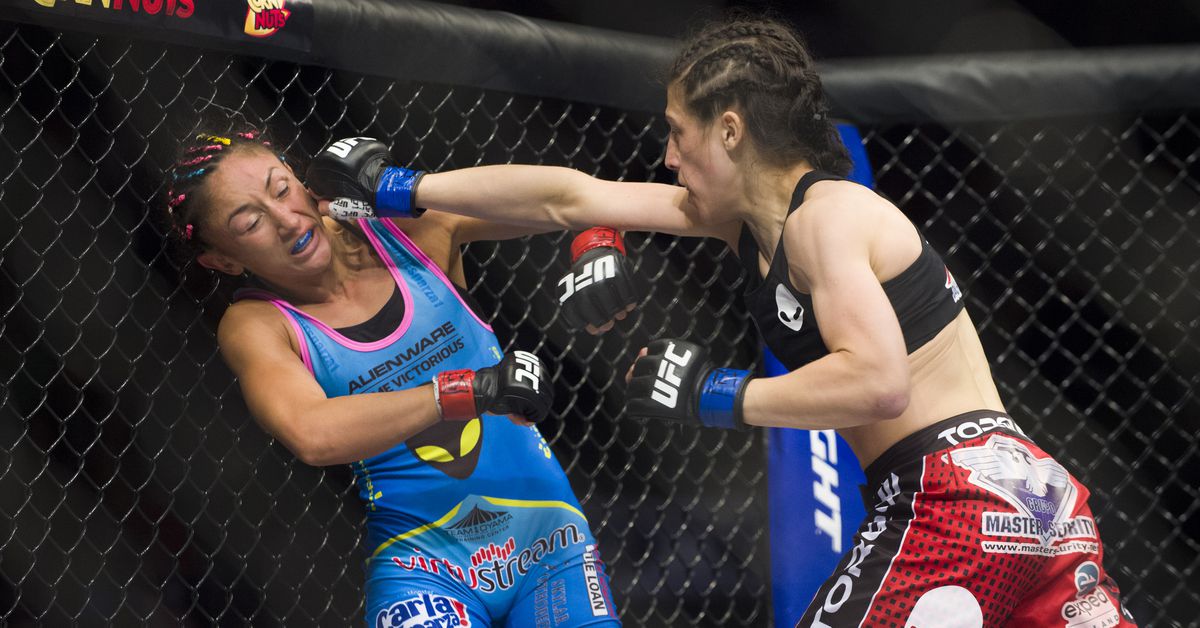 Joanna Jedrzejczyk definitely had different expectations for the rematch between Rose Namajunas and Carla Esparza ahead of UFC 274.

In a prediction made when speaking to MMA Fighting, the ex-UFC strawweight champion picked Namajunas to earn a “first-round finish” but there was no knockout, no submission and, truth be told, very little action over five rounds before Esparza eked out a split decision win to reclaim the 115-pound title.

While the fight didn’t play out the way she expected, Jedrzjeczyk, who returns for a rematch against Zhang Weili at UFC 275, still believes Namajunas did enough to secure the victory. However, she definitely wasn’t impressed by what she saw out of Esparza over five rounds.

“I was very surprised,” Jedrzejczyk told MMA Fighting at the UFC 275 pre-fight press conference. Jedrzejczyk said that sometimes it takes more effort to defeat a champion. But you all know that I speak for myself. Rose is not my representative, but I do know the facts. If you are feeling that the first round was not good, you must do something. Sometimes you have to risk to get the victory even paying a big price. I don’t know what happened. Until the end of the fight, I thought that Rose got it but no and here we go.

“Like Carla I thought she would look better. She had many [fights] wins on her streak, but I still think she looks the same seven years ago in Dallas when she fought for my belt. History loves to draw a line and [I’m] will soon be champion .”

Jedrzejczyk was the person who dethroned Esparza with a brutal second-round knockout after Esparza became the UFC’s inaugural strawweight champion following The Ultimate Fighter season 20.

She defended the title five more times. This record remains for the division. Jedrzejczyk was eager to get the chance to reclaim it, an ambition that only grew after Esparza became champion again.

“I am proud of my legacy,” Jedrzejczyk stated. “I have received so many messages from Polish people, from people all over the world after the fight [at UFC 274] and some of them are like ‘I’m so sorry, I was hating on you because you took a few losses but you’re the real GOAT. It was not known that you held the belt so long. This division was a lot of work. It’s the lightest division in the UFC but people watching the strawweights and we always put on great fights. Me, Weili Zhang, Rose and other girls as well.

” After this weekend I felt even more motivated. Because I have been working so hard to prepare for the fight against Weili Zhang, I feel tired. I got back to American Top Team in the middle of January and I’ve been training from 11 to 13 times a week in the last four months. Before the weekend, I was like I need to make some adjustments in my training schedule but after what I have seen at UFC 274, I’m more motivated and I just want to do more to win.”

Jedrzejczyk also sent some words of encouragement to Namajunas after a tough outing this past Saturday because she’s endured some devastating losses of her own over the years.

“This is a tough business and I feel so sorry for Rose,” Jedrzejczyk said. “She doesn’t have to be sorry. It is a difficult business. It looks easy and that’s the craziest [thing] about this sport. We train because it’s part of the beauty and joy that comes with this sport. We do the weight cuts. Our family and friends don’t get to see us for long periods of time. Sometimes, it is not our night when we step into the Octagon.

“I took big losses in my fighting career but it doesn’t define you. It’s important to stay positive and to learn from your mistakes to get to the top. Although it took some time, I am now super motivated and disciplined for my fight against Weili Zhang .

UFC President Dana White has already targeted the fight between Jedrzejczyk and Zhang as a potential No. 1 contender’s bout with the winner likely to draw the first shot at Esparza as the new champion.

That’s what Jedrzejczyk already expected heading into UFC 275, but now it’s upped the ante as she seeks revenge against Zhang with plans to then take the title away from Esparza for a second time.