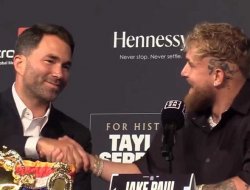 Top British promoter Eddie Hearn does not hide the fact that he is waiting for the fight between American content maker Jake Paul (6-0, 4 KOs) and British light heavyweight Tommy Fury (8-0, 4 KOs), which is scheduled for February 25 in Saudi Arabia, and pays tribute to Jake for choosing a risky option that could cost him a perfect record.

“I have Jake Paul in the fight with Tommy Fury is a big favorite,” said Hearn. – Over 35 years in boxing, I realized one thing: the psychological state here is no less important than in ordinary life. You can do the coolest training, but if you’re not (psychologically) ready for war, then things can change.”

“Call it a delusion, call it what you want, but I honestly believe that Jake Paul considers himself the best fighter in the world,” admitted Eddie. — If I advised Jake Paul, I would tell him to refuse to fight Tommy, because he can get a lot more money for other even bigger fights. For example, Paul vs. KSI is a huge fight that will bring in a lot of money. But Tommy Fury, he can lose.

“In general, I think this is a dangerous fight for Paul, and I respect him for taking it,” said the promoter. “I can’t say I know Tommy well enough, but I’ve seen him in action. You know, he can’t be British champion, he can’t do a lot of things. But he can fight. And he is an undefeated fighter. So I like it. I think it’s a good fight. I am quite fascinated.”

Meanwhile, Tyson Fury “threatens” his brother over a possible loss to Jake Paul.