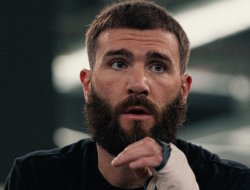 Former IBF super middleweight champion Caleb “Sweet Hands” Plant (21-1, 12 KOs) promises to retire former two-time WBC champion Anthony Dirrell (34-2-2, 25 KOs) on October 15. These guys somehow did not work out with friendly communication from the day the fight was announced, which will take place at the Barclays Center in Brooklyn (USA).

“Now he can ‘feel’ whatever he wants, but he can’t do anything in the ring. He says he’s like “Dog”, but somehow he yips a lot. Like small dogs. Looks like he’s just trying to hype himself,” Plant said at a press conference. – Well, on October 15, I will give him a severe spanking. I’ll teach you a life lesson.”

Caleb assured that “after all this, Dirrell will retire.”

“He’s finished. I’m going to beat him up so he doesn’t want to see the ring anymore. Regardless of whether I knock him out or knead him all 12 rounds, they will raise my hand, ”Plant promised boringly.

We previously reported that Plant agreed to fight the ex-champ