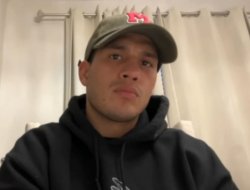 Former world middleweight champion (up to 76.2 kg) American David Benavidez (26-0, 23 KOs) gave
interview for a news portal from the USA.

— I want to ask you about Dmitry Bivol’s performance. It was almost a dry victory over Zurdo. Are you surprised how easily he did it?

— I was not surprised. He always looks like this. He’s a great boxer, moves really well. I was surprised that Zurdo wasn’t able to do much. He was unable to impose his will. I think he threw too many identical combinations. I don’t know, I think he prepared incorrectly, didn’t study. Great fight, congratulations to Bivol. He did what he had to. He is definitely a force to be reckoned with. He is really good. And I’d love to get a title shot against him in the future, but I feel right now the fight that needs to be done at light heavyweight is him against Beterbiev. I feel like this is going to be an awesome fight.

– Well, since you said it, then who will win?

“You never know. If you look at how Beterbiev fought for the WBC title against Oleksandr Gvozdyk… Yes, I sparred with Gvozdyk. He has really good movement in the ring, but he doesn’t hit much at all. And he shook Beterbiev once or even twice with good right hands, good combinations. And Bivol is stronger than Alexander. The way Bivol moves, he has a great right hand and he has a lot of experience. I think his confidence is the highest of all time right now because he beat Canelo and he beat Zurdo. It will be a great fight. Bivol just needs to move, not to stagnate in one place. But I do not know. If Beterbiev catches him near the ropes, you don’t know. We never saw Bivol at the ropes, so maybe. We still have a lot of unanswered questions. There is an exact answer to one question – that it will be a great fight, without options.

I’m giving him the same chance. I don’t think anything will change. You say “fully motivated”, but I don’t think he was not motivated. I just think Bivol is a better and better fighter as a counter puncher. He is by far the best fighter. Canelo needs to fight Bivol the way he fought Golovkin.

– In which of the battles?

– In all of them. The way he fought Golovkin, I think he should fight Bivol too. He needs to throw more punches. When he fought Bivol, he just tried to cut off his hand, just hit him with one force. It wasn’t right. I think he was too high on his horse when he knocked out Plant, Smith and thought he could fight everyone like that. But that’s not possible. He needs to change his style for Bivol. How he will do it, I don’t know. This is his problem. It needs to be calculated.

“And Bivol doesn’t mind going down a category. If Canelo wants to rematch him at super middleweight, are you still giving Bivol the advantage?

– I think so, because he is one of those guys for whom losing weight will not be difficult. I think he is about 84 kg, so he does not need to lose so much. If so, it will be faster. He won’t be strong, but he will be faster and more evasive. I believe it will be even worse for Canelo.

I know one thing – that I need to beat Caleb Plant to become the mandatory contender for the belt, so I don’t care who I meet there: Bivol or Canelo.

I know that you sparred with Bivol and have been watching Canelo for a long time. Of these two guys, stylistically, who do you think will give you the most trouble? Will it be Canelo or will it be Bivol? You know that styles make fights.