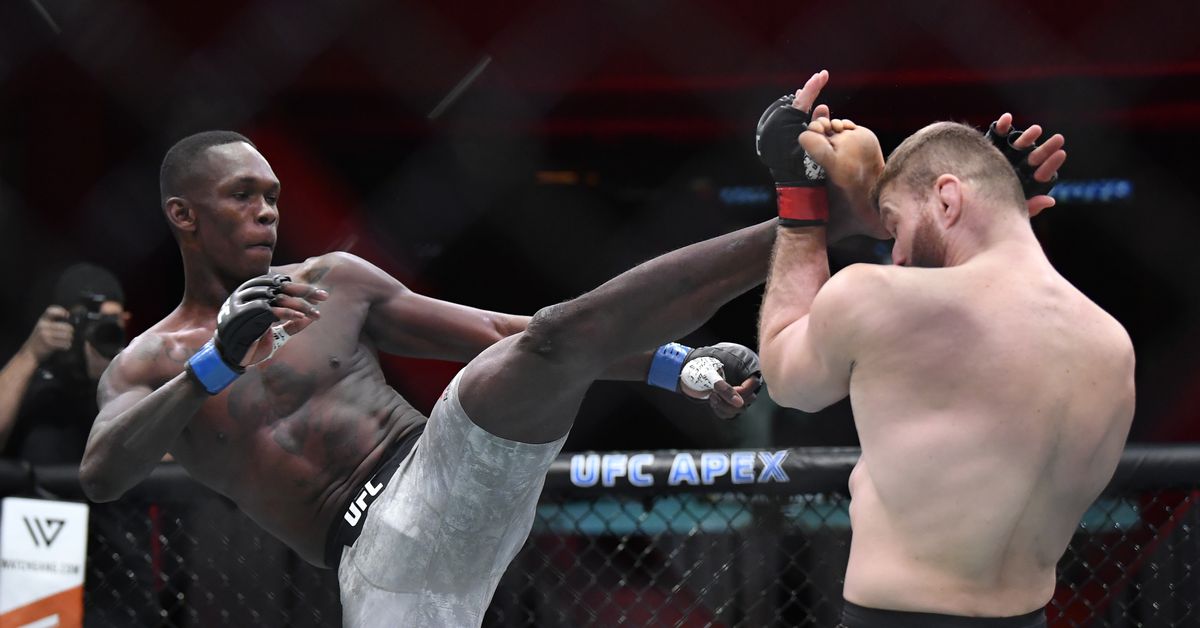 For UFC middleweight champion Israel Adesanya, the year 2021 was one to forget.

Adesanya booked two high-profile bouts last year, falling short in his bid to become a two-division champion when he challenged light heavyweight champion Jan Blachowicz at UFC 259 and then dropping back down to 185 pounds to log his third straight successful title defense in a rematch against Marvin Vettori at UFC 263.

The loss to Blachowicz was the first for Adesanya, a former kickboxing standout who is currently 21-1 in MMA. In an interview with ESPN ahead of a rematch with Robert Whittaker this Saturday at UFC 271 in Houston, he admitted that he had become complacent in his recent fights and has had to re-calibrate as he aims for a busy 2022 campaign.

” I want to win three fights this year,” Adesanya stated. “At least, at least three fights this year. It’s not what I want. My last year of UFC was, in all honesty, the most disappointing year of my career. I only had two fights. I went up to light heavyweight, failed that side mission, and I defended my belt at middleweight, and there’s a point in that [Vettori] fight I got bored. “Don’t be bored Izzy,” said my [striking] coach, Twista. Keep going. He just noticed that I was off. I’m not sure what I saw. I was just like, ‘Meh, this isn’t fun anymore.’ Because the guy wasn’t trying to win, he was trying to survive. I was like, I’m the one with the belt, you’re being super defensive, so yeah.”

“I’ve accomplished a lot, exceeded a lot of my goals, but I’ve written down new ones. So I have a list of new goals that I want to achieve, and I am going back to my younger self. My younger self was the one I was when I really enjoyed the moment and soaked up all of the experience. I am tapping into my younger self, Izzy .”

Morning Report: Israel Adesanya believes fans are overvaluing Robert Whittaker’s recent wins: ‘Did he invent a new move or something?’

Robert Whittaker: ‘I’m vastly different than the person I was’ in first fight with Israel Adesanya

Being “bored” in the Vettori fight didn’t cost Adesanya as he went on to win a lopsided decision, but he lost on points to Blachowicz three months prior. A combination of timely grappling and steady striking won the unanimous victory over Adesanya.

Adesanya has heard talk that Whittaker may similarly employ wrestling to throw him off in their second fight. He isn’t sure that Whittaker will have the same success in this department.

” I wasn’t trying to, that’s what Jan was doing,” Adesanya said. “It was kind of similar to what Twista said in the Vettori fight. I was kind of bored, to be honest. It was like I said, “Alright, will you stand up?” Try and punch me? Do you want to try and submit? His opponent is a veteran and he did the right things. We congratulate him. If that’s what [Whittaker] wants to do to try and win this fight, try it. I don’t know if he’s 225 pounds, but try. And he’s never felt me grapple. Everyone that’s felt me grapple, they know I’ve got that strength. It’s not easy to feel, but once you do, they’ll be able to tell the difference because they’re thinking, “Skinny boy.” It’s no power. They discover .”

Adesanya blames complacency for his poor year and has stressed the importance of returning to his roots. Adesanya turns 33 this year, but feels that he has once again “soaked up the game” as he had earlier in his career.

As he authors the next chapter, Adesanya is taking a cue from a hip-hop legend while keeping his remaining goals in mind.

” I know that my fight career is almost over halfway. I’ve been doing this since 2008 and I’m still young, I’m fresh, I feel like I’m only getting better because like I said I’ve tapped back into my younger self and I’m learning so much and I’m really growing as a fighter, as a martial artist. I really want to close the show like J. Cole, when he put out his last album, he put this documentary out, I think it was called Applying Pressure, and I resonated with that because I was like, I want to make sure by the time this is all said and done I applied pressure and I really got everything I wanted to do done. So that’s what I’m doing right now, I’m applying pressure and yeah, pressure makes diamonds. I’m still shining, man.”