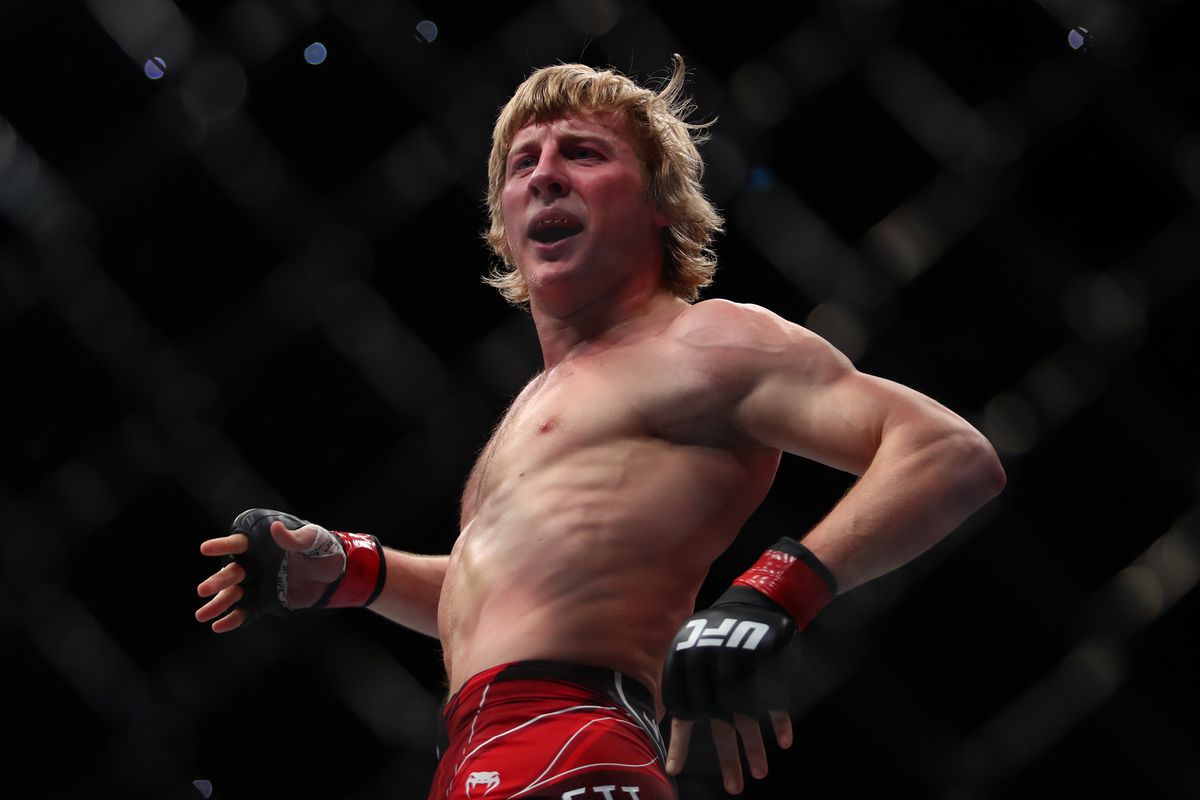 Paddy Pimblett is a star, like it or not.

He wasn’t in the main event of UFC London, he wasn’t even in the co-main event, but Pimblett was arguably the most discussed fighter on the card, and that kind of buzz has followed the 27-year-old Scouser since his days as a popular up-and-comer in Cage Warriors.

A former Cage Warriors champion making a mark on the MMA landscape after just a couple of UFC fights? Sounds familiar, no?

While most would agree that Pimblett’s fame currently outsizes his accomplishments, what we can’t seem to agree on is just how far Pimblett can go. Is he poised for a Conor McGregor-level takeover? Is he just another flash in the pan for a company that’s seen many of these?

MMA Fighting’s three-man panel of Alexander K. Lee, Damon Martin, and Jed Meshew take a close look at Pimblett’s career and debate just how high up the ranks fans can expect “The Baddy” to rise.

Agree? Disagree? We’d love for you to join in the discussion in the comments below.

Pimblett’s Hype Is About To Get Pulverized

Meshew: Remember that scene in Willy Wonka & the Chocolate Factory where Charlie and Grandpa Joe (the grifter) sneak in some Fizzy Lifting Drink and end up rising up and up until they nearly run into the fan and are cut to pieces? That’s basically Paddy Pimblett right now, and the ceiling fan is Ilia Topuria, which is why Paddy is burping his ass off to avoid the fan.

I don’t mean to criticize Pimblett. But if Paddy is a fan of Conor McGregor and thinks he will have an enviable run for the title, then you should just forget about it. McGregor’s rise to stardom was almost impossible to duplicate, because he had a lot of luck (all fighters have this, but Conor rolled only sevens over three years). Furthermore, for Conor’s many flaws as a fighter, he still possessed some elite ability to serve as the foundation of his success — abilities that Pimblett simply doesn’t have.

Although Pimblett can be a decent fighter, he is not an excellent fighter. He’s got some pop in his hands and a fun grappling game, but his defense largely consists of a good ability to recover and pray, and he’s not a brilliant athlete. In today’s UFC, those factors all add up to a guy who will be a fun action fighter that loses to good athletes and disciplined fighters — a gatekeeper to the top 25 essentially. Beyond that, it’s genuinely hard to craft a title run for Pimblett, even with the most generous of matchmaking. There is no one currently in the top 15 who wouldn’t be at least a 3-to-1 favorite over Pimblett if they fought this year.

Now is when people will chime in with, “He’s only 27, he still has room to grow!” Technically, yes, but Pimblett isn’t some rookie to fighting. He has 10 years in the game and he’s still getting chin-checked by Kazula Vargas in the closest thing the UFC books to a squash match. He doesn’t have a lot of hope.

Pimblett is a great guy, but that doesn’t make him a star. He’s a brilliant self-promoter and a fun fighter to watch, and those two factors have already made him more successful than 99. 99 percent of the fighters in the UFC today.

The UFC could (and should) book him twice a year on a card in England and feed him an endless supply of winnable matchups — past-their-prime big names, Contender Series standouts, guys who can’t grapple — and watch him continue to draw interest and build momentum, and then finally give him a rising contender they want to put over. Lather, rinse, repeat. At the end of the day, the goal of prizefighting is to earn the most prizes, and Pimblett can make an incredibly lucrative career out of the fattening-the-hog-for-slaughter routine.

Lee: Let me start off this section with the faintest of praise: Paddy Pimblett isn’t that bad!

His rapid popularity rise has caused a perception problem for

Pimblett, which is not completely unfounded. He’s about 20 times more of a celebrity right now than he is a proven fighter, and that disparity has caused critics to dismiss him as someone who’s better at talking the talk than walking the walk.

Pimblett has received a lot of attention for his party animal personality, his endorsements, and social media activity. These have all helped to raise his profile among MMA enthusiasts. Fans have also started to believe that Pimblett is just a can crusher, or worse, that Pimblett is actually a contender in cans.

Pimblett was slow to join the UFC, despite being on their radar since Cage Warriors. He fought solid competition there too, with his only losses coming to future UFC fighters Cameron Else and Nad Narimani and current Bellator fighter Soren Bak (you can throw a controversial win over Julian Erosa in there too, but there’s no shame in losing to Erosa either). In an age where we regularly have fighters who barely have any resume to speak of being signed off of Contender Series, I’m not entirely sure why Pimblett’s body of work is the subject of such scrutiny when he’s more accomplished than a lot of UFC newcomers.

There’s no question he’s been given favorable matchups in his first two UFC appearances — Luigi Vendramini was 1-2 when he fought Pimblett, and Kazula Vargas was at a clear grappling disadvantage on paper — but he won both those fights in the first round, didn’t he? Although they had bumpy encounters, he was able to take care of the business at the end.

Without dipping too deep into the “anything can happen in MMA” well, it’s perfectly reasonable to draw up a scenario where Pimblett continues to be the beneficiary of strategic matchmaking and rattles off four or five wins to gradually climb up the UFC ranks. He might stumble when he gets his first real step up in competition, but lightweight is one of the deepest divisions in the sport, so a loss shouldn’t immediately disqualify him from contention. He’s a strong grappler and he’s got enough raw power to give a respectable scrap to anyone in the 20-30 range of the rankings. Whether he develops any further is anyone’s guess, but to dismiss his chances of ever being a top-15 guy seems silly to me when we anoint dozens of different names as “the next big thing” every year and a lot of them don’t even have Pimblett’s qualifications.

Pimblett is clearly doing an excellent job and doesn’t require me to extol his talents. His reputation is where he needs to do a lot more work. It’s very easy to point out flaws in his game or repeatedly say what he’s not. But it’s much easier to imagine what he might be.

Martin Paddy Pimblett has been a UFC star, but it’s not Conor McGregor.

Considering the vast amount of attention paid to Pimblett’s second fight in the UFC, anybody disputing his drawing power is just lying to themselves. There’s the hard truth that Pimblett isn’t a highly skilled fighter who can make waves as a contender in the lightweight division. Even when he was in Cage Warriors, which isn’t necessarily the strongest regional promotion in the world, Pimblett was falling to opponents like Nad Narimani and Soren Bak, who are both solid fighters, but again, not exactly top-tier fighters at either featherweight or lightweight.

The comparisons between McGregor and Pimblett are very easy to draw based on his fervent fanbase in the United Kingdom. This is similar to what “The Notorious,” did for Ireland. But that’s about it. McGregor faced Max Holloway in his UFC 2nd fight. He had aspirations to become a champion as soon as the promotion started. The UFC seems determined to stop Pimblett from competing with the top lightweight fighters.

Pimblett loves to tout that he’s never in a boring fight and that’s absolutely true — but his attitude can often be a detriment when it comes to his actual performances. He got rocked hard in his octagon debut against Luigi Vendramini, and Pimblett was cracked again by Kazula Vargas before turning the tables to finish the fight by submission. Imagine Pimblett maintaining that energy as he faces ranked opposition in the UFC.

Chances are Pimblett would be a 4-to-1 underdog in any of those fights, and rightfully so.

Maybe Pimblett decides to suffer through a grueling weight cut to get down to 145 pounds again, but it’s not like things get a whole lot easier in that division. He is No. 15 in the UFC’s featherweight rankings is Ilia Topuria — a fighter Pimblett has already openly said he’s not interested in facing.

Rather than diminish Pimblett’s star power by throwing him to the wolves, the UFC will probably continue matching him up with fighters on the lower end of the lightweight division with a mix of Contender Series and The Ultimate Fighter-style veterans. The UFC keeps a big roster filled at all times, and there are plenty of 1-3 lightweights to potentially add to Pimblett’s resume.

With the UFC headed back to the U.K. later this year, Pimblett will surely get a marquee spot on that card — maybe even a main or co-main event depending on the timing — but it’s really difficult to see any route that ends with him being a title contender, much less a top-15 ranked fighter in arguably the deepest division in the sport.