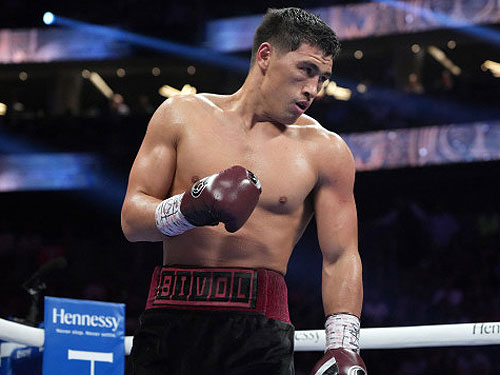 Having successfully defended the WBA Super light heavyweight title (up to 79.4 kg) against the absolute champion of the second middleweight (up to 76.2 kg) from Mexico, Canelo Alvarez (57-2-2, 39 KOs), Russian Dmitry Bivol (20-0 , 11 KOs) talked to an American reporter.

AT interview the champion told what it means for him to defeat the pound-for-pound leader, compared his victory over Canelo with the victory of Floyd Mayweather, expressed his opinion on his place in the ranking of the best fighters regardless of the weight category, and also commented on the place in the ranking of the WBO welterweight champion weight (up to 66.4 kg) American Terence Crawford (38-0, 29 KOs) and the unified second featherweight champion (up to 59 kg) from the USA Shakur Stevenson (18-0, 9 KOs).

What does she mean? It means that if you believe in yourself, work hard, work right, then you will achieve a lot. I proved that I can be with the best fighters. I am one of the best fighters. My boxing fans are happy. They believed in me – and everything worked out.

How did you perform against Canelo compared to Mayweather who also beat him?

– You know, these were different fights. These are two different Canelos. He was younger then and his style was a bit different. Now he is bigger, more confident and now his style is more aggressive. These are different styles. Floyd had a good win over him. I remember this fight. This was the first fight I saw Canelo. He was good, but of course Mayweather was better. I also had a good fight with him, but these are two different fights.

You didn’t take anything from the Mayweather fight at all, right? You just knew you could beat him.

– I only took Mayweather’s confidence [смеётся]. I saw their fight and Mayweather was confident. He was able to beat this guy because Canelo is only human.

— I don’t know where I am. Now it doesn’t matter to me. It’s just a rating. Crawford is a good fighter, excellent. I like his style, I like the way he moves in the ring. He had four belts. Yes, he is one of the best, no problem, but there are other fighters like Usyk, Fury, Golovkin, Spence. I’m one of the best, but I only have one belt, to be honest. Yes, I beat the best fighter in the world, but maybe I need to beat someone else to feel like I’m one of the best. I’m not sure. I never said I was the pound-for-pound king. This is for boxing fans. If they say, then OK. But I don’t think about it.

– Shakur Stevenson is now also after defeating Canelo’s camp. Do you think it should be in pound-for-pound?

– He now has two titles, he defeated Oscar Valdez. He is also one of the best. But I don’t know, I haven’t seen his fights. Maybe saw a few seconds of the best moments on Instagram. I like his style, he’s good, but I don’t know where he ranks. And where is Crawford. For some, Crawford is better, for some, I’m the best, for some, Canelo is still the best. It doesn’t matter to me.