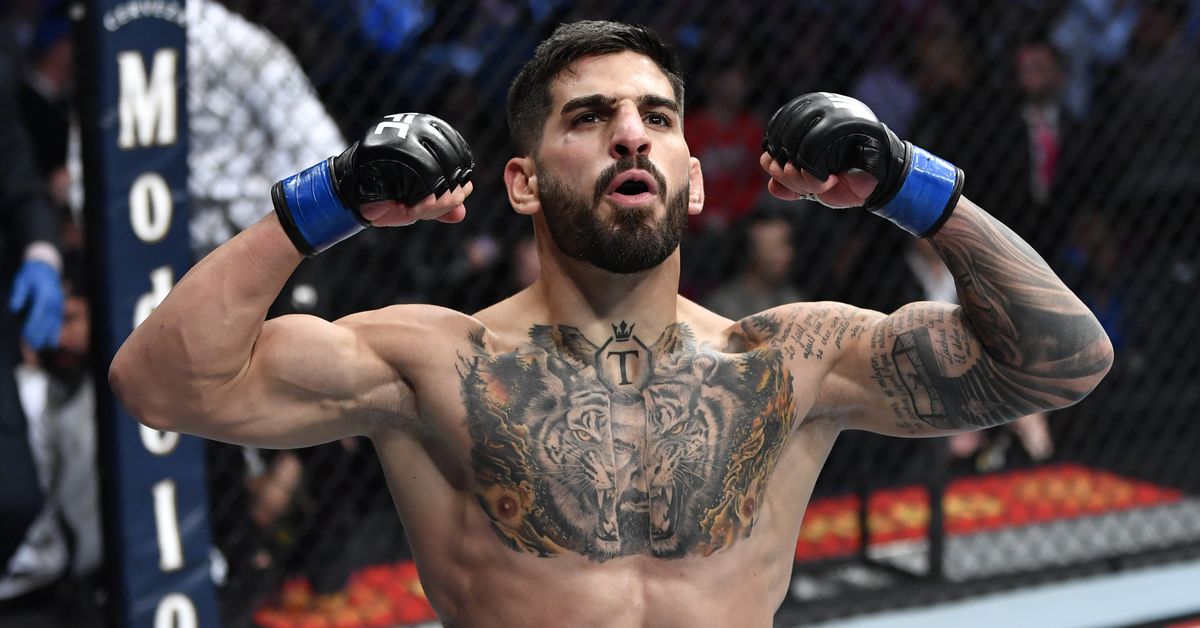 Ilia Topuria has been waiting to see Paddy Pimblett for almost a year.

The two UFC fighters got into a heated argument in the hotel before their bouts at UFC London on Tuesday. Punches were thrown before the duo was separated by onlookers and members of Topuria’s team. Topuria and Pimblett have continued to chirp back and forth since the incident, and on Wednesday’s episode of The MMA Hour, the Georgian contender revealed that the origin of the animosity stemmed from a tweet written by Pimblett in early 2021 that appeared to belittle the 2008 war between Georgia and Russia.

“He called me yesterday and it didn’t happen. It comes from a long time ago,” Topuria explained on The MMA Hour. “He was arguing with one of my close friends once on Twitter and he posted [something] like, ‘Now I understand why Russia destroyed Georgia, because you’re dumb,’ and it makes my blood boil. When I saw it, I was surprised. I didn’t believe it when I saw that tweet, because in 2008 I was living in Georgia when the war happened, and it was a very difficult time for me, for my family, for all my friends, for my country. Many innocent children, including kids, died in the war.

“It’s so funny to hear someone joking around about this. He texted me, I can’t recall what tweets I sent, and when I got the fight in London, they text me three weeks back, saying, “I can’t wait until I see you in London. We’ll see if you have the balls to tell me everything you texted me on Twitter.’ Bulls***.”

A screenshot of Pimblett’s original tweet can be seen below, along with Topuria’s initial response. “Lad how stupid are these Georgians man,” Pimblett wrote, accompanied by several crying laughing emojis. “No wonder the Russians terrorise their lives.”

You think that’s funny?! Many innocent victims, including children, were killed in the Russian attack on us. One of these people is the one who backs terrorism and racists! This tweet will haunt you for life! @PaddyTheBaddy pic.twitter.com/IxRvn6FkXK

Topuria said he didn’t intend to run into Pimblett in the UFC’s fighter hotel on Tuesday, but once he did, he wasn’t going to let the popular Liverpudlian off the hook.

“He wanted to shake my hand,” Topuria explained. He didn’t actually come [toward me],, but he did look at me nicely. He threw the bottle back at me and then I slip. That is the reason why you see the video. Everybody saw the video and what had happened. So it’s hard. You have the Ukraine flag [in your studio], can you imagine if I started to make some jokes about the war, where their children are dying, where people are suffering? You can’t talk about that. This is the reason.

Sources told MMA Fighting that Pimblett was not aware of the Russia/Georgia conflict last year when he first made remarks and that he had no idea of the historical context that could be invoked by his words.

Nonetheless, Pimblett has remained unapologetic throughout his feud with Topuria, and he fired back at the Georgia native at Wednesday’s UFC London media day, stating that Topuria “got put in his place” and “made himself look like a right tool” with the incident. Pimblett also slapped Topuria with the nickname “Mr. Hand Sanitizer” because of the bottle of hand sanitizer that was thrown during the altercation.

Because of that, Topuria — who is currently one of the UFC’s top-15 ranked featherweights — wants to fight Pimblett next, regardless of what happens on Saturday.

” I saw this interview where he said, “He’s nobody.” Topuria stated that he is small. Who the f*** does he think he is? Who the f*** is he? This guy has just one fight in the UFC. And yes, maybe I’m not so tall, but I need just one punch and I can put my balls on his forehead. So, if he gets the win, I really want to fight with him. He may not win the fight, but I will still fight him because of his people and because of me. I want to take his head off.

” If they allow me to spend time with him in an isolated room, then I will kill the motherf *****.

“He should be thankful for all of my teammates, because they separated me,” Topuria added. Topuria said, “If he didn’t, he would have been in the hospital .”

Topuria is currently scheduled to face Jai Herbert in a short-notice lightweight bout at UFC London, while Pimblett is slated to meet Kazula Vargas at 155 pounds.

So even though Topuria generally fights a featherweight, he is happy to stay at 155 pounds if it means a chance to settle the beef and fight Pimblett next.

” “Right now, the man is walking with security,” Topuria stated. “He needs security in his own country.

“I don’t know if the UFC wants me to make a step back, because for me, like I told you before, that [Pimblett] fight didn’t mean anything — it’s not going to make me move forward or something in the rankings,” Topuria added. “We’ll see. “We’ll see. Right now I’m focused on my fight, so we’ll see.”